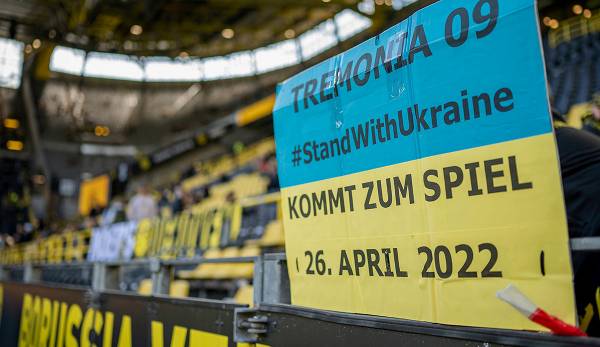 On Tuesday, the benefit game between Borussia Dortmund and Dynamo Kyiv increases. Which players are participating in the benefit game? Why is Alan Aussi playing for BVB today? Who is showing / broadcasting the benefit game? SPOX provides answers to the most important questions about the game.

BVB vs. Dynamo Kyiv: Most important information about the benefit game for Ukraine

On Tuesday at 6 p.m. the benefit game BVB vs. Dynamo Kyiv will take place. Signal Iduna Park will be the venue for the peace game organized by both clubs a few days ago.

After appearances at Legia Warsaw, Galatasaray and CFR Cluj, it is Dynamo Kyiv’s fourth international friendly since the war of aggression broke out in Ukraine.

BVB vs. Dynamo Kyiv: Most important information about the benefit game for Ukraine – location, kick-off

BVB vs. Dynamo Kyiv: Are there still tickets for the benefit game?

Yes, tickets for the benefit game against Dynamo Kyiv can still be purchased both on the BVB website and from 4.30 p.m. at the box office at the outside counters of the FanWelt. The stadium gates open at 4:30 p.m.

Tickets are available from 10 euros. There are currently no access restrictions to the stadium and therefore no 3G control. According to the club, around 25,000 tickets were sold on Monday.

BVB vs. Dynamo Kyiv: Who does the benefit game go to?

BVB has called on all fans to buy tickets for the game, even if you don’t attend the game. “We stand by the Ukrainians, together with the BVB family we have already brought many tons of relief supplies to the country and now we would like to collect money,” says Borussia Dortmund’s CEO, Hans-Joachim Watzke.

Managing Director Carsten Cramer says: “We ask you all, regardless of whether you support BVB or another team. Whether you are a football fan or not – please buy a ticket for our benefit game against Dynamo Kyiv. Let’s celebrate a world-renowned, send a sign of solidarity against war and for peace in Europe. And above all, let us help the local people together. The net proceeds of this benefit game will benefit an organization that we are currently carefully selecting and that ensures that Ukrainians in need are helped directly will.”

BVB vs. Dynamo Kyiv: Which players are in the benefit game?

At Borussia Dortmund, the difficult away game at FC Bayern Munich is still in the bones. Most recently, Marco Rose also had nine failures to report. Nevertheless, one can certainly expect a lot of stars against Kyiv who will be on the pitch for a good cause.

At Dynamo Kyiv, coach Mircea Lucescu will again have the best possible line-up. The legendary Romanian coach did everything possible to get all his players and their families to go to Bucharest to stay there during the war and keep fit.

BVB vs. Dynamo Kyiv: Why is Alan Aussi playing for BVB today?

20-year-old Alan Aussi has played for Dynamo Kyiv U19 and U21. Before the season he was loaned out to Veres Rivne by the second team. But now he’s playing soccer in Dortmund: After the outbreak of war, Aussi fled the Ukraine and came to the Westphalian city two months ago.

Here he is training with the BVB U23 team and will wear the black and yellow jersey on Tuesday. “It’s a very special moment. It’s difficult to concentrate on football. But I’m a professional and I’ll go out tomorrow and do my best,” said the defender. “But I also see another side. With the game we are helping Ukraine. We are collecting donations that will help my fellow human beings. I want to help my country in this way.”

BVB vs. Dynamo Kyiv: How is the situation in the Ukrainian league?

The Ukrainian League VBet Liha has been officially suspended since the end of February. “Due to the imposition of martial law in Ukraine, the Ukrainian championship has been suspended,” said the Ukrainian Football Association UAF at the time. After 18 games played, Shakhtar Donetsk is the leader of the Ukrainian league with a two-point lead over Dynamo Kyiv.

Coach Roberto de Zerbi’s team has been playing its home games in Kyiv for a long time due to the political unrest, and Luhansk in Zaporizhia in southern Ukraine. Teams like Dynamo Kyiv or Donetsk have been abroad since then and hope that the league at home will soon stabilize and normalize again.

Ukraine: Table of VBet Liha until the break

BVB vs. Dynamo Kyiv, broadcast: Who is showing / broadcasting the benefit game?

The game is broadcast for free by the public broadcaster ZDF shown in live stream and linear TV. If you want to watch the game on linear TV, you can do so from 5.40 p.m. on the ZDF channel. Katrin Müller-Hohenstein is the presenter, while Oliver Schmidt is the commentator.

Alternatively, the match can also be streamed online. In the in-house ZDFmedia library, the entire live program is played synchronously and parallel to the television. Click here!

BVB vs. Dynamo Kyiv: benefit game in the live ticker

In addition to the TV broadcast, you can also watch the benefit game at SPOX pursue. We tick live.

Click here for the live ticker BVB vs. Dynamo Kyiv.

BVB: The rest of the program in the Bundesliga