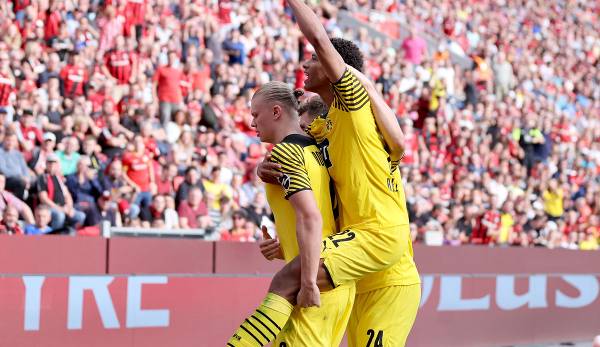 Jude Bellingham has apparently piqued the interest of the next Premier League giant. Erling Haaland set the next record in the crazy 4: 3 win of BVB against Bayer Leverkusen. Here you can find all the news and rumors about Borussia Dortmund.

Here you can find the most important news and rumors about BVB from the previous day.

After Liverpool FC and Chelsea FC, the next Premier League giant is apparently advertising in Manchester City for the services of BVB jewel Jude Bellingham. A report from Daily Star According to Bellingham is the preferred candidate to succeed Captain Fernandinho, whose contract expires next summer.

Guardiola had already raved last season after the Champions League quarter-finals between City and BVB von Bellingham. At that time, Bellingham was one of Dortmund’s best in the second leg and thus received special praise from the world coach.

“17 years old. And such an incredible fucking personality! He’s so, so good,” said Guardiola: “I can’t believe he’s only 17. Maybe he’s a liar. He’s so good, a Fantastic player. I’ve seen him yell at the center-backs that he wants the ball, the way he wants the ball. At that age it’s amazing. “

Last had the Daily Star reported Liverpool FC’s interest in Bellingham. Accordingly, Jürgen Klopp allegedly declared the 18-year-old’s obligation to be a top priority. The Reds are ready to leaf out up to 93 million euros for the England international, it said.

Bellingham still has a contract with BVB until 2025 and is an undisputed regular player in his second year in Dortmund. The black and yellow got Bellingham in the summer of 2020 for around 23 million euros from Birmingham City in the second English division.

Erling Haaland set another goal record with his brace on Saturday in BVB’s 4-3 win over Bayer Leverkusen. The Norwegian now has 45 Bundesliga goals after just 47 games, breaking the record for Uwe Seeler, who needed 52 games for the first 45 goals.

Chelsea coach Thomas Tuchel has explained why the Blues did not loan Callum Hudson-Odoi to BVB shortly before the transfer deadline. “It was a very easy decision for me on the last day of the transfer window,” said Tuchel. He had given Hudson-Odoi and BVB a rejection because otherwise he would not have seen his squad set up broad enough. “We can’t let a player go who is part of the 18- or 19-man squad. He can play on the right wing, the left wing and the two ten positions,” said Tuchel. “

You can find detailed news here.

BVB in the Champions League: schedule

Next Wednesday, BVB will have their first Champions League game of the season. The Dortmunders will start with Besiktas in Istanbul. Here you can see the entire Dortmund CL schedule.