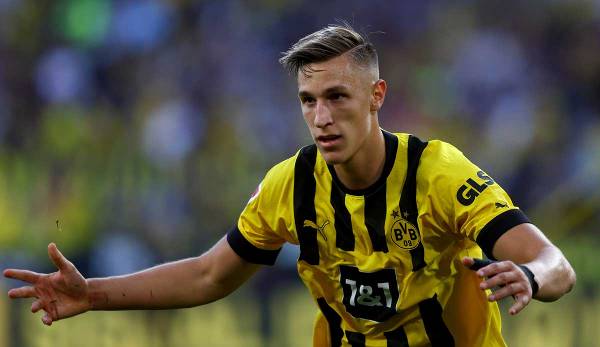 Nico Schlotterbeck switched from Freiburg to BVB in the summer, but almost gave up his shoes when he was younger. Here you can find news and rumors about BVB.

Click here for the news about BVB from the past day.

Nico Schlotterbeck is a national team player and a regular at Borussia Dortmund. Still, it wasn’t long ago that the 22-year-old dabbled in quitting. According to Schlotterbeck, he rarely played in the U15s of the Stuttgarter Kickers and was even sorted out.

“I wasn’t accepted into the U16s. I had thoughts like: what do I do now, should I stop? Was all the effort for nothing?” the BVB defender recalled in an interview with the Süddeutsche Zeitung. For Schlotterbeck, however, this was the turning point in his youth.

“From today’s perspective, the doubts came at exactly the right time, something clicked for me back then. My reaction was: I’ll show you now! After that, things really only went uphill.” Schlotterbeck ended up in the U17s of Karlsruher SC via VfR Aalen, where the current coach of SC Paderborn, Lukas Kwasniok, recognized the talent of the youngster and has consistently placed him in central defense ever since.

“He showed me what it means to be a defender and what it takes. At some point he said: If I focus fully on this position, it can be really good. And now it’s gotten so good that I play for Borussia Dortmund”, Schlotterbeck summed up.

After two years, Schlotterbeck switched to SC Freiburg, for the sports club he played 49 Bundesliga games in two seasons before moving to Borussia Dortmund for around 25 million euros before the season.

A few months ago it was reported in France that Rayan Cherki (18) wanted to leave Olympique Lyon, now the winger has extended his contract by a year until 2024 with the option of another year with ex-Bayer coach Peter Bosz’s team.

Noisy Football Mercato Borussia Dortmund was also interested in the junior international of France, Borussia had also informed Lyon of their interest in Cherki.

Cherki made his debut in Ligue 1 at the age of 16 and later in the Champions League. Cherki has now played 65 competitive games for the Lyonnais, scoring 9 goals for the winger.

At 3:30 p.m. Borussia Dortmund host Werder Bremen and can therefore temporarily take over the top of the table if the game against the Hanseatic League is successful. Here you can find all information about the game and where the game can be seen.