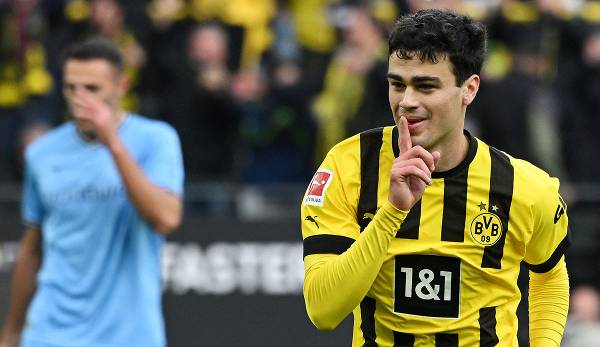 Giovanni Reyna made referee Tobias Stieler take back a penalty in the 3-0 win over VfL Bochum. Mats Hummels has given an update after his clash with Nico Schlotterbeck. Edin Terzic believes Youssoufa Moukoko has ‘taken a giant step’. News and rumors about BVB can be found here.

You can find more news about Borussia here.

“Chapeau!” shouted Bochum keeper Manuel Riemann in the direction of Giovanni Reyna when referee Tobias Stieler reversed a Dortmund penalty shortly before the half-time break. The reason: Reyna had prompted Stieler to look at the situation that led to the penalty again on the video monitor.

The American offensive man from Borussia went down in the 42nd minute when the score was 2-0 in a duel with Danilo Soares. Despite many complaints from the guests, the referee immediately pointed to the point. As opposed to Riemann after the game sports1 revealed, Reyna also intervened with a repeated “No foul! No foul!” into the discussion. Stieler looked at the scene again, the result: no penalty.

It would have been the second penalty for Dortmund, Reyna herself converted the first in the 12th minute and increased BVB’s lead to 2-0. Borussia now has two goals to his credit this season

Mats Hummels had to be treated on Saturday after a collision with teammate Nico Schlotterbeck in the 70th minute. Now the centre-back has given an update on his condition.

Hummels spoke up via Instagram story, provided a picture of himself with the words “Man, ey, why on the chocolate side”. The laceration on the right eyebrow has been closed with staples.

Incidentally, the treatment of the injury almost resulted in further injuries. As the Dortmund officials rushed onto the field, one of them lost his footing on the slippery pitch and bowled over Raphael Guerreiro, who was standing next to Hummels. The same thing happened shortly afterwards to a coach from Bochum who hit Anthony Losilla in the head with his foot. Both incidents were fortunately harmless.

BVB coach Edin Terzic was full of praise for double packer Youssoufa Moukoko after the 3-0 win. The young star “made a huge step in the whole game”, Terzic classified the overall performance of his protégé in the press conference: “He can always be played between the chains, he shows himself much better on the ball side. He uses his body much better and gives us important space.”

At the same time, the coach also tried to dampen expectations a little. “It will continue just like we protected him when he shot the ball past the goal or on the post,” said Terzic: “He is and will remain 17, we are happy that he is like that again today was able to make a great game and we will support him to become even better”.

With six goals and four assists this season, Moukoko is both the top scorer and the best scorer for the Black and Yellows and should – especially after Leipzig’s Timo Werner was injured – count on a good chance of winning the World Cup. The youngster himself was reticent about this despite his double pack: “On Thursday we’ll see who’s there. I’d like to be there, we’ll see.”