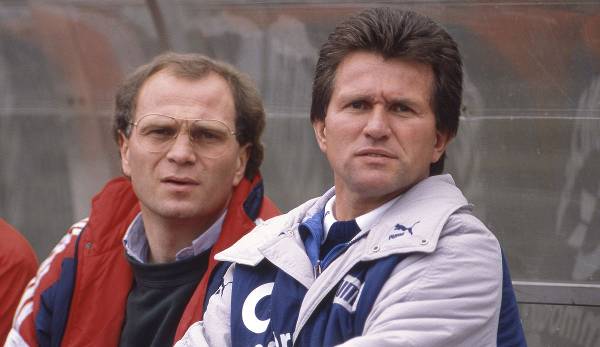 1. When Jupp Heynckes took over as head coach Borussia Mönchengladbach in 1979, he was 34 years old – and thus the youngest head coach in Bundesliga history at the time.

2. Jupp Heynckes had previously been Udo Lattek’s assistant coach for a season – whom he also succeeded as head coach at Bayern Munich in 1987.

3. Jupp Heynckes completed his training as a football coach in his last year as an active player. His teacher was Gero Bisanz, chief trainer at the DFB and later the first national coach of the women’s national soccer team.

4. Jupp Heynckes’ former team-mates at Borussia Mönchengladbach wanted him to use ‘Siezen’ as soon as he was coach. Outraged, Jupp Heynckes refrained from such deference.

5. When Heynckes was born one day after the end of the war, his native town was still called Münchengladbach.

6. He was the ninth of ten children. His father was a blacksmith and his mother ran a general store.

7. In his youth he collected tennis balls for five marks a day to collect his pocket money.

9. When he was a player, his teammates at Mönchengladbach asked him for investment tips.

10 Jupp Heynckes is a trained plasterer. He completed his apprenticeship at the top of his class and dreamed of becoming an architect.

11. Jupp Heynckes met his wife Iris in his training company. The two have been married since 1967.

12. Heynckes’ daughter Kerstin has the same birthday as her father – she will be 53 on Monday.

13. When Iris Heynckes fell ill with cancer in 2004, her husband took a year and a half to look after his wife.

14 Iris Heynckes does not call Jupp Heynckes Jupp, but Josef.

15 The farm in Schwalmtal where the Heynckes live is called “Casa de los gatos”. In addition to the Heynckes and the aforementioned cats, “six muscovy ducks and wonderful fish in the pond” also live there, as Heynckes recently said SID recently told. The beloved long-haired German Shepherd Cando passed away in 2019. He was almost 14 years old.

16 Cando played a crucial role in Heynckes’ decision to become Bayern coach for the fourth time in 2017: first his wife Iris and daughter Kerstin gave their go. “Then Cando barked twice, and then the thing was wiped dry.”

17 When Cando was still alive, that meant luxury for Heynckes: “When I’ve taken care of my animals in the morning, walked my dog, showered, swam and then sat with my wife at the breakfast table or on the terrace, where I don’t have any time pressure. Unwind. That’s luxury: having time at your disposal.”

18 After the treble in 2013, the Bayern players gave him a koi for his pond as a farewell gift; Jupp Heynckes christened the fish Philippo – after Captain Philipp Lahm.

19 Bastian Schweinsteiger thought he was in California when he visited Schwalmtal: “Are we in Los Angeles?” asked the midfielder and congratulated him: “A great garden here.”

20 Jupp Heynckes always managed to “get all the players and the whole team on board,” Bastian Schweinsteiger wrote to Jupp Heynckes in a birthday letter in Bayern-Vereinsmagazin 51: “I don’t know anyone who has ever spoken ill of you.”

23 Jupp Heynckes’ favorite drink when he was playing is said to have been fresh milk.

24 Fast cars gave him as little as a gambler, as did other temptations of profit. Jupp Heynckes is said to have been to Lovers’ Lane, the legendary discotheque owned by his teammate Günter Netzer in Mönchengladbach, exactly once – when the singer Udo Jürgens, whom Heynckes valued, was a guest.