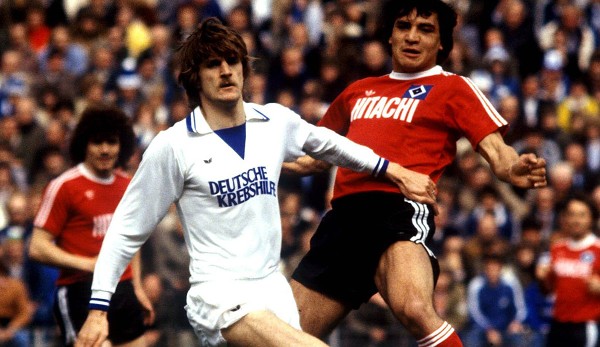 Between 2007 and 2022, the Russian gas supplier Gazprom featured prominently on the jerseys of FC Schalke 04. The miners then ended the partnership and found a new partner last summer. From noble gestures to the heavily criticized connection to Russia: SPOX shows all shirt sponsors in the history of the S04.

It all started with a noble gesture, but recently FC Schalke 04 was heavily criticized for their choice of sponsors. Now there is a new beginning. Here are the legendary and not-so-legendary shirt sponsors in club history.

In the Bundesliga you were allowed to have shirt advertising from 1973, but at Schalke it took five years before the first sponsor appeared on the shirt. If Schalke 04 sells retro jerseys with the inscription of the German Cancer Aid, part of the proceeds still end up there today. nice gesture

Even if Klaus Fischer fought until the sponsor’s name was illegible, we know that the textile manufacturer from Burladingen (Baden-Württemberg) was the sponsor at the time.

It was the time when even underpants were made of jeans and a football club like that was a strong advertising medium for a jeans manufacturer. The players probably had jeans in their closets too. And success: Schalke got promoted to the Bundesliga with the jerseys.

you again? Trigema celebrated his comeback at Schalke 04 for one season. It was enough for 13th place with 32:36 points.

The turntable manufacturer advertised a season at Schalke 04, but as technology developed, the company’s future was no longer rosy and disappeared from the scene. A certain Toni Schumacher also wore the Knappen jersey that season, but conceded a smooth 84 goals and was partly responsible for the Knappen’s relegation.

Not difficult to guess what the colleagues were selling. aluminum wheels for cars. A bit of tuning was already very popular back then. Schalke, who played in the 2nd Bundesliga for a long time, were not that popular. The company was actually called “Reifen Höffken”, which the TV cameras of the time didn’t show well. So they abbreviated (RH also matched the founder Rüdiger Höffken) and presented themselves like this. What don’t you do for good PR?!

“R’Activ makes active” was the very imaginative slogan of the beverage manufacturer at the time. The Schalke bosses thought it was good and got the product from the Müller Group as a shirt sponsor. The Schalke players should probably become “assets”.

If the product ends up on the jersey, then why not the brand itself. Müller only stayed on the Royal Blues jersey for one season.

We didn’t want to deprive you of this guest player at FC Schalke 04 in the 1993/94 season against TSV Havelse. The Havelser didn’t run either – out of respect.

Not only the sponsor cleaned everything away, but also Schalke. Here on 7 May 1997 against Inter Milan in the first leg of the UEFA Cup final. Lehmann, Wilmots and Co. won 1-0. Then came pure salvation on May 21, 1997 in the second leg: Schalke won 4-1 on penalties and won the UEFA Cup in these shirts!

Success was also achieved with the successor. Schalke celebrated the DFB Cup victory in 2001 with the stadium, which today gives its name to the stadium. Unfortunately, one of the saddest days of that time is also remembered: the four-minute championship in 2001…

Back then, Rudi Assauer made a great deal with the insurance company, which paid around six million euros a year. More than double the predecessor. Speaking of double: Hamit and Halil Altintop. Or Halil and Hamit. During this time, Schalke afforded a much more expensive squad (including Lincoln or Poulsen), took the financial risk – and at some point also got into trouble.

The arrival of the Russian company was then ceremoniously celebrated. It was said that the deal saved Schalke from financial collapse, but an aftertaste always lingered. Financially stricken like never before and with a squad that no longer has any prospects, Schalke was relegated in 2021. Gazprom’s last appearance in the Bundesliga was back in May.

February 2022: Schalke 04 appear with the club name on their chest after the contract with Gazprom was terminated prematurely. The reason for this was, among other things, the pressure that arose because of the Russian attack on Ukraine. A return to the past but with a clean step into the future.

The housing provider from North Rhine-Westphalia stepped in temporarily. But that wasn’t a long-term solution, the company rather helped out at short notice – almost like an interim coach. Both remained partners.

In the summer of 2022, Schalke 04 then announced that “the German market leader in online new car sales” was the new main sponsor. FC Schalke 04 hasn’t been a sports car for a long time, but who knows what’s to come in the future…