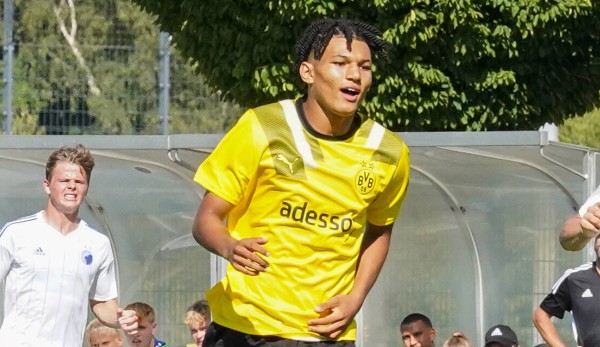 Paris Brunner scored an average of more than three goals per game in Borussia Dortmund’s U17s before the 16-year-old was promoted to BVB’s U19s. The striker’s run continued there, too.

This supposed “fate” is likely to be suffered by many players in Borussia Dortmund’s youth division in the coming years: Anyone who draws attention to themselves in the BVB youth team with an extraordinary goal rate will get various comparisons with Youssoufa Moukoko in the media.

He once created a huge hype with his 141 goals in 88 competitive games for the Dortmund U17s and U19s, which was understandable given his young age coupled with the many goals. Paris Brunner is currently in a similar situation.

He’s also a striker. In February, Brunner will be 17 years old. Shortly thereafter, the U19 Bundesliga will start playing again in the new year and it will be interesting to see whether Brunner will continue his outstanding run of the current season in 2023.

After all, the bare numbers are enormously impressive: Brunner has scored 22 goals and prepared two in 19 competitive games so far. He hits the net every 61 minutes. Already last season there were nine goals and four assists in 15 league games. A total of 39 games and 31 goals in the BVB jersey.

BVB: Paris Brunner with 14 goals in four games with the U17s

It is particularly noteworthy that Brunner’s picture-perfect run was not stopped by a promotion. For the Dortmund U17s he scored 14 of his team’s 18 goals in the first four match days of the Bundesliga West. Against ex-club Bochum, from where he came to Borussia in 2020, he scored five times in a 5-1 win on Matchday 2.

So it made enough sense to push Brunner up another age group. U19 coach Mike Tullberg welcomed the German with roots in the Democratic Republic of the Congo to his team. Brunner was initially in the squad for the Youth League games, where attacker Bradley Fink, who had moved to FC Basel, could have played.

Since October, Brunner has also been playing in the U19 league. Only once more, in the derby against Schalke – Brunner remained goalless at 1:1 – he kicked in his nominally age-appropriate U17. However, he immediately confirmed that Brunner has outgrown his age and has no problem playing with players who are two years his senior.

BVB talent Paris Brunner: His performance data in the 2022/23 season

So far he has scored five times in ten games for Tullberg’s team. The 16-year-old equalized on his league debut against Bonner SC (2-1) and scored the winning goal. Even more important, however, were his three stalls in the Youth League against Sevilla, ManCity (goal to make it 1-0 after just 57 seconds) and Copenhagen. In Spain he saved the 1-1 seven minutes after coming on as a substitute, in Denmark he took care of it artistic header goal in reserve to 1:0 in minute 87 for the much acclaimed progress.

“It worked straight away, I settled into the team straight away. I made up my mind to wait for the next steps, to accept everything that came my way and to score even more,” Brunner said afterwards Ruhr news.

Brunner was also unstoppable in the German U17 national team – coach Christian Wück’s second captain has scored six goals in five international matches there. “Paris is a very reflective player. He knows where he wants to go and what he has to invest to get there,” says Wück in an interview SPOX and GOALS. “That is what sets him apart and, in my opinion, is the main reason why he has developed so rapidly in the past year.”

Paris Brunner: Those are his strengths and weaknesses

Brunner has been swimming on a wave for a few months that has made his chest significantly broader. “Because he is very successful in all his teams, he currently has an extremely high level of self-confidence,” says Wück. “That also helped him to take an incredible step forward. He takes responsibility in the team, represents his opinion and can inspire a team.”

The biggest plus of the 1.85 meter tall Brunner is clearly his physique at this young age. At 16, he already has physical abilities that allow him to remain stable and assert himself in duels with elders. Added to this are his footballing strengths.

“Paris is very present in front of the goal and extremely dangerous. He develops an incredible power in the game with and against the ball,” says Wück and explains that Brunner can act as a centre-forward, hanging forward or winger. “Thanks to this power, his physicality and athleticism coupled with his technical skills, he is predestined to score quickly after winning the ball quickly. He also has a good basic speed. All these different factors make him so dangerous.”

BVB has tied Paris Brunner until 2025

Brunner still has potential above all with the first contact and his technique when he approaches the opponent at high speed. The understanding of the game and the clarity of one’s own actions are not yet fully developed. For Wück, however, this is whining at a high level, “because you always have to make a compromise between athleticism and technically filigree football”.

BVB has tied the top scorer to itself by 2025. The association wants to gently encourage and challenge Brunner. The player clearly has the imagination for more. Even if his crazy run should slow down at some point.