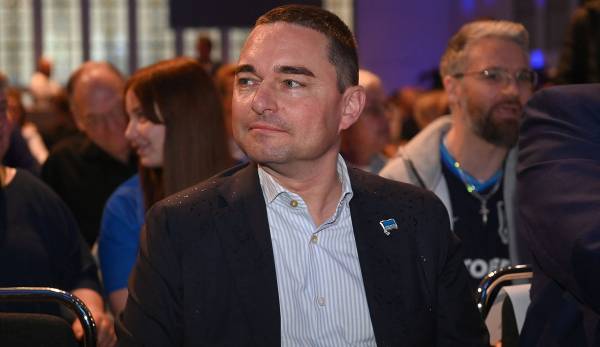 The investor of Hertha BSC, Lars Windhorst, has apparently commissioned an Israeli business detective agency to set up a campaign to overthrow former President Werner Gegenbauer. SPOX clarifies what the allegations are, how the report came about in the first place and how those involved comment on the situation.

A report of Financial Times According to Hertha investor Lars Windhorst, who joined the capital city club in 2019, an Israeli team of private detectives is said to have set up a covert smear campaign against former Berlin President Werner Gegenbauer.

This alleged campaign was ultimately to be crowned with success. At the end of May of this year, Gegenbauer resigned from his post after a bitter power struggle with Windhorst. His successor was the former ultra Kai Bernstein, who was surprisingly elected the new president at the general meeting on June 26, 2022.

What are the allegations?

The Tel Aviv-based company called Shibumi Strategy Limited, codenamed “Euro 2020”, is said to have contacted Gegenbauer’s supporters, opponents and family members online and in person over a period of one year in order to collect confidential and precarious information from the 72-year-old’s immediate environment .

Shibumi is said to have made great efforts to leave Gegenbauer as the responsible scapegoat for Hertha’s ongoing sporting crisis. Apparently, online profiles were created by alleged fans, a dedicated website called “Gegenbauer raus” was set up and even a caricaturist was paid to post unfavorable pictures and comments about Gegenbauer on the Internet. These comments, pictures and pages were then advertised diligently on various social media channels.

In addition, a large-scale hate show was said to be planned for the general meeting in autumn 2021, which was intended to promote Gegenbauer’s dismissal. Various “Gegenbauer raus” articles should be distributed to fans and employees. At the same time, Shibumi set up an online blog in which a large number of negative Hertha articles were collected and to which journalists should have access in order to be able to report extensively on the Hertha chaos.

Windhorst should make a good impression at the club, however. Apparently, the investor commissioned Shibumi to “plan and develop a strategy” that should improve his standing among Hertha fans and employees.

How did the Financial Times report come about?

The fact that the allegations were published at all is due to a lawsuit brought by Shibumi Strategy Limited against Windhorst before an Israeli court. According to the business detective agency, Windhorst failed to meet his financial obligations to Shibumi.

The Israeli company claims that a division of Windhorst’s Tennor company broke a contract owing Shibumi a million euros for eight months of work. In addition, an allegedly verbally agreed performance bonus of four million euros is still pending.

In messages to the financier, Shibumi CEO Ori Gur-Ari claimed that during a June 2021 meeting, Windhorst said his company could make “millions of euros” if the campaign was successful. Ultimately, however, the Israeli company “worked days and nights for eight months without being paid”.

On the other hand, in email and text conversations released as part of the case, Windhorst complained that he had paid “huge sums” to Shibumi for years without getting anything in return.

Any information of Financial Times-The report is based on Israeli court documents that were filed in Tel Aviv almost three weeks ago and are available to the newspaper.

How do those involved respond to the allegations?

Gur-Ari stated that he was unaware of either the indictment or the allegations made. “You must have made a mistake there,” he said Financial Times. Windhorst, in turn, described the report as “nonsense”.

Gegenbauer could not be reached for comment, and Hertha BSC said when asked that Tennor had assured “that this story is complete nonsense.”

Why did Windhorst want to get rid of Gegenbauer?

At the beginning of the year, reports first surfaced that there were serious differences of opinion between the club’s leadership around Gegenbauer and Windhorst about the future direction of the club.

“I was counting on Hertha being in charge of people who think rationally and think about the future, who also want lasting success,” said Windhorst in an interview with the business magazine in February capital. However, he recognized that some people in the club are primarily concerned with “maintaining power and cliques”, without specifically naming Gegenbauer.

Only a little later he submitted Picture TV and asserted that it is “very, very difficult to achieve, to discuss, to cooperate as a team under the leadership of Mr. Gegenbauer”. For the President, the Berlin Hertha is just “a personal toy”.

Even then, Windhorst is said to have planned to replace Gegenbauer at the general meeting in May. He tied further investments in the club to the resignation of the 72-year-old. There will only be a new investment by the Tennor Group “when there are good people at the top of the club again,” said Windhorst.

Why did Gegenbauer finally resign?

Finally, Gegenbauer took his hat off before the said general meeting, one day after Hertha had saved themselves from relegation to the 2nd Bundesliga with a 2-0 win against Hamburger SV and resigned as President of the Berliners.

“There are moments for new beginnings. And I think and feel that such a moment has come today. With my decision, I want to initiate a new beginning for the future of Hertha BSC,” announced Gegenbauer in a statement.

However, he explicitly emphasized that the “current disagreements with our investor played no role in my decision. This dispute has never been a personal one. It is a controversy between Hertha BSC and Tennor Holding.”

What has Windhorst been accused of in the past?

It is not the first time that Windhorst has been noticed by allegedly missing payments to creditors. At the beginning of November 2021, a Dutch court declared Windhorsts Tennor Holding bankrupt. According to the court, Tennor was no longer able to meet its payment obligations.

It was one mirror– Reportedly a sum of 25 million euros, which Windhorst borrowed from a company called S4 Limited but later failed to repay.

But S4 should not have been the only company where the investor got into debt. A company owned by Athina Onassis from Panama wanted money back – since Tennor apparently did not pay, the court decided on bankruptcy. Windhorst probably finally reached a standstill agreement with the said companies, after which the court lifted the bankruptcy again in December.

He reached a similar agreement after mirror-Information with Monaco-based billionaire Manfredi Lefebvre. Windhorst is said to have owed him 124 million euros, and he again delayed repayments. Lefebvre had apparently bought Windhorst shares and Windhorst had committed to repurchase the shares plus premium.

Hertha BSC in the Bundesliga: The current table