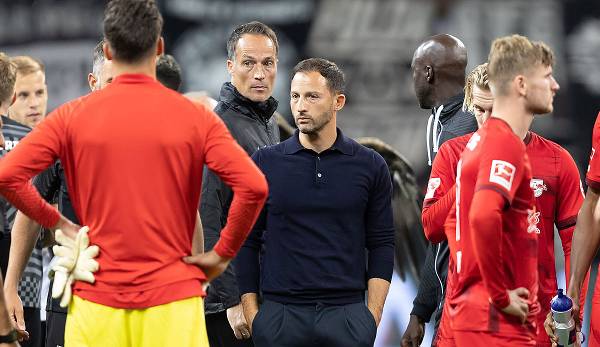 Coach Domenico Tedesco apparently already has his back against the wall at RB Leipzig. Marco Rose is traded as a possible successor.

one sports1According to the report, Tedesco could be fired if Leipzig lost in the Champions League against Shakhtar Donetsk on Tuesday (9 p.m. in LIVETICKER).

The 36-year-old is therefore more and more isolated in the club. Both those responsible and parts of the team would have turned away from Tedesco.

The bosses around managing director Oliver Mintzlaff are said to dislike the way RBL plays football. Tedesco attaches too much importance to possession football, but Leipzig wants to stand for pressing and fast, attractive transitions.

The Saxons took just five points from their first five Bundesliga games and are currently in a disappointing eleventh place. After the 0: 4 debacle on Saturday at Eintracht Frankfurt, Tedesco had heavily criticized his team.

“We completely missed the basics, we weren’t on the pitch at all in the first half. We were terrible, really, a disaster,” Tedesco explained.

Will Marco Rose take over for Domenico Tedesco?

If the former Schalke coach, who only took over the post from Jesse Marsch in December 2021 and led RBL to the Champions League and to the first title in the club’s history with the DFB Cup win, is actually dismissed, it is loud sports1 already a successor ready.

Accordingly, the former BVB coach Marco Rose is the top favorite. The 45-year-old, who was released from Borussia Dortmund in May and lives in Leipzig with his family anyway, already knows the RB cosmos from his time in Salzburg.

In addition, Rose was brought to Borussia Mönchengladbach by Max Eberl in 2019 and had a successful time there. Eberl, on the other hand, is about to join Leipzig as sports director.