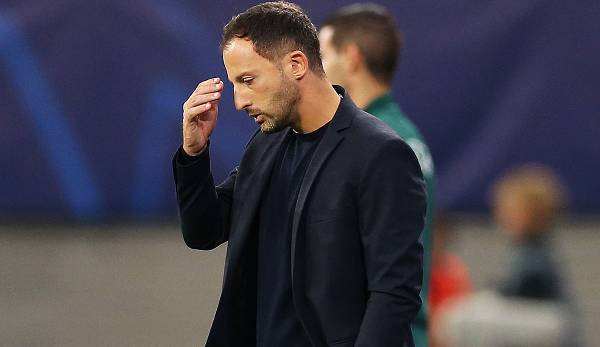 RB Leipzig reacted to the false start to the new season and fired coach Domenico Tedesco. The club announced the expected decision a day after the bitter 4-1 (1-0) defeat in the Champions League opener against Shakhtar Donetsk.

The assistant coaches Andreas Hinkel and Max Urwantschky will also be relieved of their duties. RB had won the DFB Cup under Tedesco just 109 days ago.

It is still unclear who will take care of Leipzig in the Bundesliga against Borussia Dortmund (3.30 p.m.) on Saturday. Ex-BVB coach Marco Rose is the favorite to succeed him. The club announced that they wanted to “inform them promptly” about a successor arrangement.

Oliver Mintzlaff, CEO of RB Leipzig, said of the coach’s departure: “The decision to release Domenico Tedesco was very difficult for us. We played a very successful second half of the season with Domenico last season and secured a two-man Cut qualified for the Champions League. In addition, we won our first major title with the DFB Cup and thus played the most successful season in our young club history.”

Tedesco is an “excellent coach who will certainly continue to be successful. However, after the moderate start to the Bundesliga season with five points from five games, especially after the most recent games at Eintracht Frankfurt and at home against Shakhtar Donetsk, we lacked the conviction that an immediate turnaround can take place in the current constellation”.

Mintzlaff continued: “We have overall responsibility for RB Leipzig and want to achieve our goals. Therefore, in the overall assessment, we came to the conclusion that we need a new impetus. We regret that we are now parting ways and we would like to express our thanks “To Domenico Tedesco and his team for the work they have done. We wish Domenico all the best for the sporting and private future.”