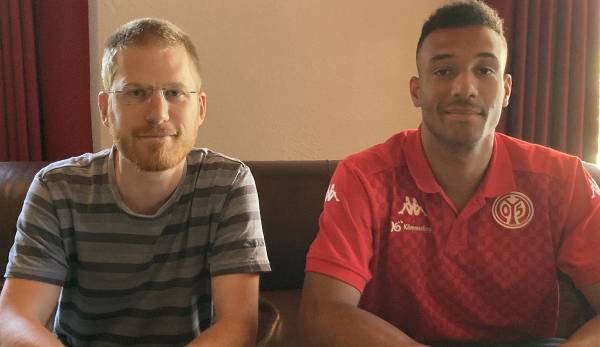 Karim Onisiwo has been playing for 1. FSV Mainz 05 since the beginning of 2016. Before he arrived in the Bundesliga, the 30-year-old made a very difficult journey on his way to becoming a professional, which in the meantime took the striker to Austria’s 4th division .

In an interview with SPOX and GOAL Onisiwo talks about his crazy discovery, the apprenticeship as a car mechanic, being kicked out of the squad, the termination of his advisor at the time and his crash into the national league.

The Austria international also opens up about a legal battle before his move to Mainz, kicking in the ass from coach Bo Svensson and his dream of the Premier League.

Mr. Onisiwo, you belong to the rare breed of players in the Bundesliga who have never gone through an academy or a youth academy. Have you ever thought about where you would be today if that were the case?

Karim Onisiwo: no Of course you learn things like passing, receiving the ball, overview, tactics, all these subtleties much earlier in a NLZ. I missed this professional training. Since I started playing professional football at the age of 17, I acquired other components there that helped me later: physicality, assertiveness, unconditional will. I wouldn’t want to trade this harder path I’ve walked for the usual one.

You are said to have been discovered shortly after your sixth birthday by a football coach in Vienna playing table football in the park, and then your parents registered you with Favoritner AC in 1998. Is that correct?

Onisiwo: Not with the park. I was walking home from a doctor’s appointment with my mom in a kind of bad mood. Then I ran away from her and through a red light because there were no cars and I didn’t want to wait. That’s what my future coach saw from the other side, I practically bumped into him. He was about to go to the club, the grounds were right next to it. When he saw me sprinting, he stopped me and said: We’re training this afternoon, come over!

So he hasn’t seen you with the ball at your feet before?

Onisiwo: no I actually went to training there on the same day and actually kicked a ball for the first time. He then said I have something special because I’m so fast and have so much energy. Running away from my mother was my positive moment of destiny, so to speak, and I owe a lot to that. (laughs)

You stayed with this Viennese district club for three years. In the end you played for five other teams in your youth: Rapid and Austria Wien, 1. Simmeringer SC, SC Team Wiener Linien and First Vienna FC. How did it come about that you went to Rivale Austria after just one year at Rapid at the age of ten?

Onisiwo: I didn’t feel comfortable there. At that time, having fun and being with my friends was the priority for me. But there are so many clubs around Vienna that my buddies ended up being totally scattered. It was clear to me that I would have to break away from a lot of my friends at Rapid, but I didn’t really make friends there. It just didn’t work out that way, which was much less fun for me. It quickly became clear to me: I have to leave here again. At Austria, where I also met David Alaba and a close friendship developed, it was much more pleasant and harmonious.

You stayed there for three years and were considered a promising talent. But in 2005 you decided to leave the club again. Why?

Onisiwo: My next step would have been to become part of the Austria Academy for a few years. However, it was a bit outside of Vienna. I sat down with my parents and family and thought long and hard about whether I really wanted to do this. In the end I decided against it. After that, my uncle became more and more important to me.

Onisiwo: He has driven me to many games and tournaments before. In addition to club training, I did individual training with him in the park every day. I really trained with him a lot to compensate for not being in the academy. It was all about my technical skills. We put up a lot of cones and practiced tight fits so I’d have it all in before I got into adult football. These things are no longer explicitly trained there, you have to be able to do that by then.

Ultimately, this change of direction meant that you chose the rocky path and, at the age of 17, got to know the seniors’ division very early on at First Vienna FC, under Peter Stöger, among others. You scored there regularly for the U17s and U19s, but you couldn’t make it to the top. Why?

Onisiwo: I signed my first professional contract there when I was 17 and trained with the first team for the whole week. But I always did my final training with the U19s and then played there too. At the top everything was just tight for me. They bet on players who were older and had more experience. As a young lad, a strong season in the U19s didn’t lead to the kind of explosion of perspective and market value that we know today.

During this time you started an apprenticeship as a car mechanic after graduating from school, but dropped out again after less than a year.

Onisiwo: Because after a little more than a year, the professional contract with Vienna was suddenly in the room. I had to make a decision: continue car training or become a professional soccer player? Of course I didn’t think twice about it, but my mother in particular wasn’t particularly happy that I was taking the risk of becoming a professional footballer without having completed my training. It was anything but clear whether I would make it and assert myself there.

How did you come to decide on this course?

Onisiwo: I’ve always been interested in cars, but mostly because of video games like Need for Speed ​​or The Fast and the Furious. It was therefore somehow obvious, because otherwise all I had on my mind was football.

Which of these skills have you retained to this day?

Onisiwo: I can still change tires, but to be honest I’d rather have them done again.

What was the coolest car you ever drove and what is your dream car?

Onisiwo: I love American cars. When I moved to Mainz, I fulfilled a dream and bought a Mustang GT. It has a five-liter machine, bubbles really nicely and is just a lot of fun. And fortunately it was in the price range that I could just about afford. (laughs)

Karim Onisiwo: His senior career at a glance