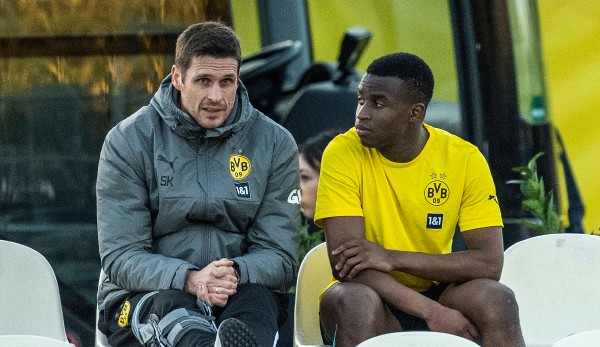 Sports director Sebastian Kehl has given Youssoufa Moukoko an ultimatum. Also: Mahmoud Dahoud is about to extend his contract with Borussia Dortmund. You can find all the news and rumors about BVB here.

BVB sports director Sebastian Kehl has given Youssoufa Moukoko an ultimatum. “We made him a very attractive offer that gives him a lot of room for development,” said Kehl in an interview with the table football: “Youssoufa can now accept this offer and commit to Borussia Dortmund – or we will go our separate ways.” Kehl expects a decision before the Bundesliga restart next Sunday against FC Augsburg.

The contract of 18-year-old Moukoko, who was in the squad for the German national team at the World Cup in Qatar, expires at the end of the season. The Bundesliga club and Moukoko have been negotiating an extension for months. “I would like him to choose us because he hasn’t finished his development and I see huge potential in him. But there are limits for us as a club. And we have shown these limits. Now it’s over up to him to make a commitment in a timely manner,” said Kehl.

BVB would like to continue working with the Sturm jewel, which is said to be being courted by several top clubs from the English Premier League and also by FC Barcelona. “Youssoufa is a great boy. He’s been with us at the club for almost seven years, we trained and developed him,” said Kehl. The club has therefore “been trying to extend his contract for many months because we are absolutely convinced that this club and this constellation are right for Youssoufa’s sporting perspective”.

BVB, News: Mahmoud Dahoud about to extend his contract

Mahmoud Dahoud has expressed confidence in extending his contract with Borussia Dortmund, which expires in the summer. The Ruhr news he said he was in good talks. Learn more here.

Dahoud moved to BVB in 2017. He has played 95 Bundesliga games there so far. In which he has four goals and ten assists.