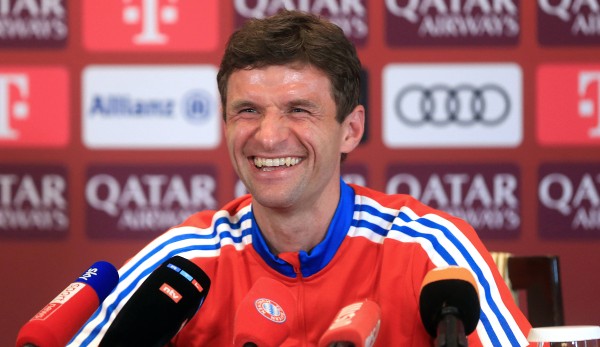 Thomas Müller is facing a trend-setting year at FC Bayern Munich. Under Julian Nagelsmann, the 2014 world champion seems to have lost his regular place. Is an era passing? An analysis of the complicated situation.

The year 2023 could be formative for German and Bavarian football. One in which hierarchies are changing – in the national team as well as at Bayern Munich. Thomas Müller is at the center of these changes. “I don’t know exactly how things will continue either,” he hinted at resigning from the DFB after the World Cup in Qatar: “If that was my last game for Germany, I would like to say a few words to all German football fans who have accompanied me all these years.”

An emotional speech followed, only to classify days later that he was concerned with the national coach’s decision, but that he was still available. Müller is no longer undisputed. The 33-year-old knows that himself. He has also become more dispensable at FC Bayern. So far he has played 969 minutes in a competitive game with Munich, most of which he has played as a centre-forward. Since October he has been absent regularly. Hip problems, illness, muscular problems – signs of physical exhaustion that were otherwise never seen in him.

Ironically, FC Bayern had their strongest phase of the season without him. In the meantime, he slipped into an earnings crisis. Müller was not the main reason for this, but one of many. He’s not a goalscorer and the team lacked one in that phase. When the two-time Champions League winner was absent, Eric Maxim Choupo-Moting and Jamal Musiala increasingly came into focus. Two players who will make life difficult for him again this year.

Thomas Müller at Bayern Munich: The search for the regular place

The times when Müller could easily be used on the flank are over. In this respect, only two positions remain in Julian Nagelsmann’s system: center forward and ten. In the ninth position, Choupo-Moting became a game changer for FCB before the World Cup. In 850 minutes, the Cameroonian scored eleven goals and set up three more. But it’s not just the many scorer points that give him an advantage over Müller.

The team benefits enormously from his qualities as a wall player. With his back to the opponent’s defence, he can fasten balls and distribute them accurately. Müller has other qualities. He is an outstanding passer and space opener. His deep runs and also his running paths against the ball make him special. Especially in the first half of the season, FC Bayern needed Choupo-Moting’s skills a little more. The also 33-year-old creates time and space for his fast and lively teammates on the offensive through his presence in the centre.

If the native of Hamburg can confirm his form in the new year, Müller will probably have bad chances for a regular place in the striker position. Especially since he can use his described skills much better anyway if he acts one row further down. Müller is more the initiator than the executor. But even on the ten he is currently at a disadvantage.

Jamal Musiala, the currently best offensive player of the record champions, plays there. In 22 games, the 19-year-old has been directly involved in 22 goals. His dribbles, passes and degrees enchant the fans – and Nagelsmann too. Several media reported in December that the coach is planning to have Musiala on the ten.

Müller would then only be the bank. A scenario that has always caused unrest over the past 13 years. Because when Müller was in a form crisis between 2016 and 2019, he caused his coaches big problems. Carlo Ancelotti and Niko Kovac also stumbled upon the 2014 world champion, whom they didn’t really know how to integrate. Neither found any positions in their systems in which Müller could develop. And the team suffered because his qualities were lacking almost everywhere.

But now the case is different. For the first time, the feeling of renunciation arises. Anyone who has followed FC Bayern this season will come to the conclusion that Musiala and Choupo-Moting did their job more reliably than Müller, who was often up in the air.

In the test match against RB Salzburg, the problems showed up again recently. Müller always tried, but acted without luck. Sometimes he even seemed out of place in the attack of the record champions. He could be the loser of the winter.

Thomas Müller at Bayern Munich: the end of an era?

Everything indicates that Müller will no longer play the big role at Bayern for the rest of the season. So the end of an era? The farewell should not be too early. Müller is still acting at a very high level and with his experience, especially at a high level, is still very important for the team. His runs, his passes, his work against the ball – there will be many more games this season that Müller can decide.

At the moment, however, tactically other types of players are in demand. The offensive all-rounder is most likely to have a chance if Choupo-Moting’s flight should come to an end at some point. Then Müller must be there.

Alternatively, there is still a possibility to use Müller and Musiala together behind a striker – for which Nagelsmann would have to adapt the basic order a bit. Until then, the veteran will have to find his way in a new role: As one of the first options in the extended circle of the tribe. As the twelfth man.

It seems like the year 2023 will be one of handover. The changing hierarchies will make life more difficult for Müller. When Kovac once said that Müller would play if there was a need, there was rightly a lot of criticism. The wording was disrespectful.

It will still be exciting to see how the native of Upper Bavaria deals with the situation this time. His career is far from over and he still has the quality to be an important leading player at FC Bayern. Nevertheless, he could increasingly become Musiala’s companion. When Müller said in Qatar that he didn’t know how things would go from now on, all of that was probably floating through his head. It will be a landmark year for him.