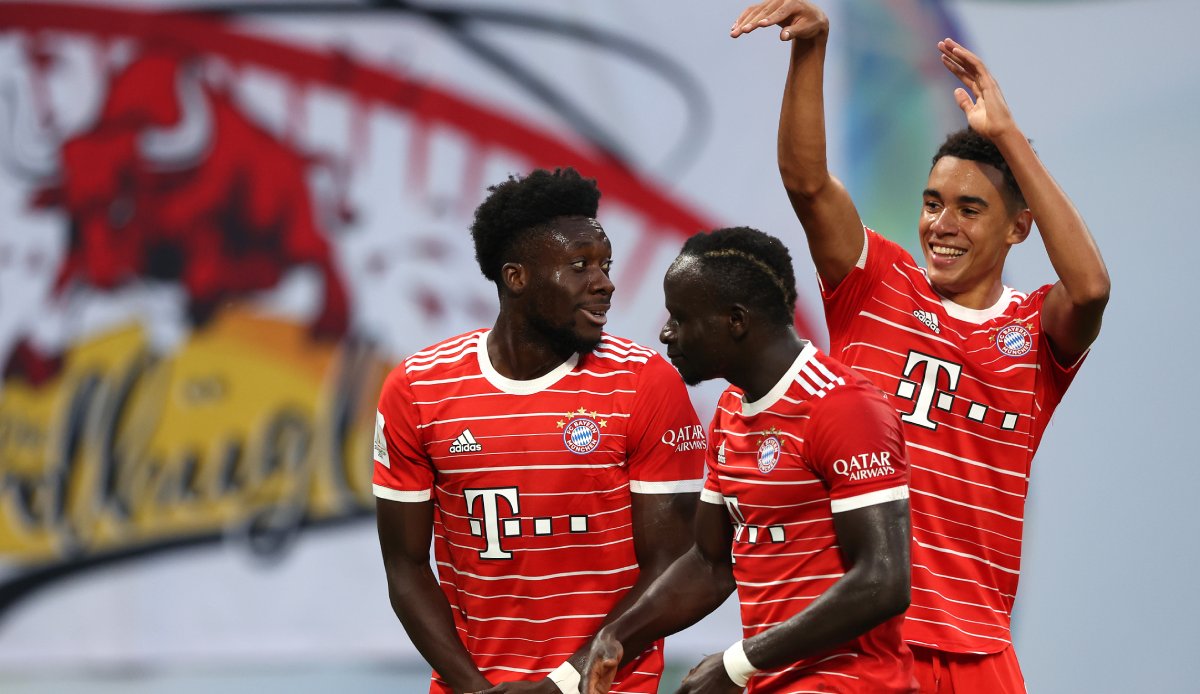 FC Bayern Munich has clinched the first title of the 2022/2023 season. In the Supercup, the record champions defeated the DFB Cup winners RB Leipzig 5:3 (3:0). After an almost outstanding first half, Bayern lapsed into old problems again in the second half and made things unnecessarily exciting at the end.

The outstanding Jamal Musiala, newcomer Sadio Mane and Benjamin Pavard scored for Munich in the first half, after Leipzig’s goal to make it 1:3 by Marcel Halstenberg, Serge Gnabry increased it to 4:1. Christopher Nkunku with a penalty and Dani Olmo made it exciting again.

Only in the first ten minutes, especially from Leipzig, was there something like balance between the two teams in the first half. In the eighth minute, Marcel Sabitzer, the ex-Leipziger who was rightly often criticized last season, made a save for Bayern in dire need when the Leipzig team was about to shoot at the orphaned goal after a trip by Manuel Neuer.

But at the latest after Jamal Musiala’s wonderful opening goal with a flick from the right corner of the penalty area to the left (15′), Bayern played the game in an almost frighteningly sovereign manner and dominated Leipzig. And that without seeming to require too much effort.

Of Bayern’s numerous expensive newcomers in the summer, coach Julian Nagelsmann initially only trusted Sadio Mane at his former club. In addition to Matthijs De Ligt, Noussair Mazraoui and Co, Leroy Sane and Kingsley Coman were also on the bench. In any case, the squad depth of FC Bayern should not be a problem in the coming season. At RB Leipzig, Bayern’s dream player Konrad Laimer was in the starting XI.

The Austrian, one of the top six in the Bundesliga last season, lost the crucial ball in front of Musiala’s 1-0 defeat and then failed to get a foot in the game. After the first 45 minutes there were just 19 ball contacts and eight passes in a statistic, as well as only three duels won out of nine – everything but no numbers that recommend one for FC Bayern.

When it was 2-0, Bayern, sent onto the field in a 4-2-2-2 formation by Nagelsmann, gave a rudimentary idea of ​​what their attacking strategy could look like in the time after Robert Lewandowski. At the behest of those responsible, the record champions should play more variably up front and spread the responsibility over several shoulders. At 2-0 it looked like this: The outstanding Musiala put a pass through at top speed to Serge Gnabry, who was completely free, who passed it to Sadio Mane, who was almost even more free in the centre. Mane, who had been extremely inconspicuous until then, heaved the ball past Peter Gulasci to make it 2-0 and Julian Nagelsmann clenched his fists on the sidelines.

If the 3-0 came from another stroke of genius Musiala, who again duped Lukas Klostermann and put the ball back on Benjamin Pavard (45th), the goal to 4-1 in the wilder second half was the result of a successful pace increase by Bayern . Substitute Kingsley Coman passed Thomas Müller, whose shot Peter Gulasci could only clap in the middle; Serge Gnabry used the rebound. A few moments later, Leipzig were lucky that Mane was just offside with his second goal, again after the Munich team had increased the pace.

Marcel Halstenberg had previously scored the Leipzig goal with a header. The fact that this goal also spoiled the overall impression of the game was down to the Munich team. Christopher Nkunku only scored with a penalty to make it 2: 4 (77th), Dani Olmo even made it 3: 4 in the 89th. By then Bayern, for whom Sadio Mane scored two more goals from narrow offside positions, had fallen back into their old ways on the defensive.

In the end, the game was a mirror image of the past season: a first half like the first half of the season, only better. And a final phase that was reminiscent of long stretches of the rather shaky second half of the season. Leroy Sane’s 5:3 in the eighth minute of stoppage time ended the game that had unnecessarily turned into a wild ride.

RB Leipzig – Bayern Munich: The data of the game

The star of the game: Jamal Musiala (FC Bayern Munich)

Julian Nagelsmann made the right decision to entrust the 19-year-old with one of the two playmaker positions. The international threw the ball wonderfully into the goal to make it 1-0, gave the no less skilful penultimate pass before Sadio Manes made it 2-0 and prepared Benjamin Pavard’s 3-0 with two wobbles that made national team colleague Lukas Klostermann look old. And when he wasn’t involved in scoring, “Bambi” dribbled it was a sheer delight.

The flop of the game: Lukas Klostermann (RB Leipzig)

There was a close duel with Konrad Laimer for the title of the flop. 24 turnovers, 19 of them in the first half, and a couple of rather unpleasant actions against Jamal Musiala allowed Halstenberg to succeed.

The Hanoverian had no problems leading the game, which was rather disembodied for long stretches. Christopher Nkunku’s offside hit to make it 1-1 was also offside in the opinion of the VAR, although the TV pictures suggested that the last pass came involuntarily from Bayern’s Serge Gnabry.