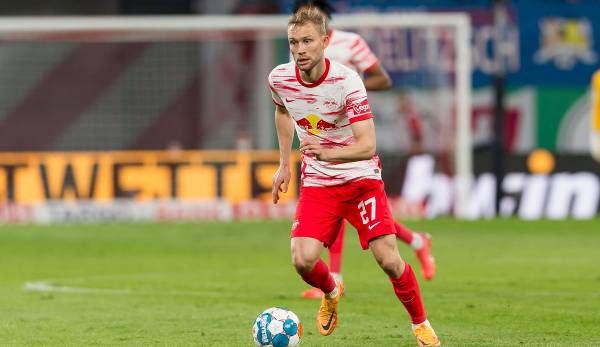 Konrad Laimer has become a key player at RB Leipzig. Bayern Munich, Borussia Dortmund, Manchester United, Tottenham Hotspur and Liverpool FC are said to be interested in the midfielder. SPOX and GOAL explain its strengths.

Konrad Laimer went ahead again last week against Glasgow Rangers. RB struggled for a long time in the 1-0 win against the Scots in the Europa League semi-final first leg. The Rangers defended very deep with two chains of four, RB had great difficulty finding gaps in the orderly defense.

When things got dangerous, Laimer usually had a hand in the pie. The midfielder repeatedly launched dynamic runs down the field, successfully pulling the opposing chain apart a few times – and making room for attacking stars Christopher Nkunku, Danie Olmo and Dominik Szoboszlai.

These preparatory actions against Glasgow are emblematic of Laimer’s standing in the public eye. Because when Leipzig was talked about in the past, the Austrian mostly flew under the radar – until this season, in which he made another big leap forward in his development…

But first things first. Laimer is a child of the RB school. In 2007 he began his football training at the academy at Red Bull Salzburg. In 2014, like so many players before and after him, he was awarded to the farm team in Liefering. There he celebrates his professional debut in the second division and then starts under Adi Hütter in Salzburg. In his last season in Austria, Laimer was voted the best player in the league with six points in 31 games. In 2017 he finally moved to Leipzig for around seven million euros.

Once there, he quickly made a name for himself as a pressing monster and endurance runner between the offensive and defensive. Since then, Laimer has almost always played – also thanks to his versatility. While he was initially used partly as a right-back under Ralph Hasenhüttl, his sphere of action gradually shifted to the center as a six or eight. Ex-coach Julian Nagelsmann, who once described Laimer as a “monster ball-conquering machine”, finally gave him a permanent home in the machine room in the 2019/2020 season. Laimer played 33 competitive games, scored four goals and four assists each, advanced to the semi-finals of the Champions League with RB – the final breakthrough.

“This season I’ve gained confidence in my favorite position and it’s easier to give your best performance when you’re in rhythm,” explained the Austrian afterwards table football. And thanks to Nagelsmann, Laimer added another dimension to his run-intensive game, which he still benefits from today: he improves his build-up. “I made a big step forward there. Under Julian Nagelsmann we play more from behind. But I’ve gotten better in everything.”

But his rise is stopped abruptly. In the following season, Laimer suffers from bone edema, only plays four competitive games and is out for most of the year. After playing only a little under ex-coach Jesse Marsch, although fit again, he has been back in Leipzig since the beginning of December and the arrival of Domenico Tedesco – and how!

Konrad Laimer: Those are his transfer options

Konrad Laimer: More dangerous than ever

At least since the spectacular 4-1 away win at BVB, Laimer has been a main actor at RB. In Dortmund, Laimer scored twice himself and added another goal. Not only because of his scorer points he was the best player of the game that evening. Laimer scored his first goal himself with strong and fast counter-pressing, immediately stabbed in the depths when the opportunity arose and also showed a great eye for his team-mates. The meanwhile 3:0 by Nkunku he even put on a back-heel trick.

Ball acquisition, running paths, goal scoring and passing – the Austrian combined all of this into a complete package that could not be defended.

“How he plays, how he works, how he sacrificed himself for the team. He combines many things, conquers the ball extremely high, is an aggressive player who always tries to win the ball fairly, initiates counterattacks with dribbles and passes and can score goals themselves,” enthused Tedesco after the game.

After the development step under Nagelsmann, Laimer has improved even further under Tedesco and is now much more dangerous on the offensive than in previous years. The midfielder has snapped four times this season – and has scored more times than in his four Bundesliga years (three goals). As you can see against Glasgow, it’s all about the right routes to the right rooms at the right time. Tedesco explained at the time: “We want him to sneak away again and again, he did that very well today”.

Over the years, Laimer has blossomed into a kind of all-purpose weapon that can do almost anything in the center as an eight or six. Laimer is fast: With a top speed of 34.27 km/h, he is Leipzig’s fastest midfielder this season. Laimer is strong in the air: he won around 58% of his duels. Laimer is robust: With around 29 duels per game, he goes into the most duels among Leipzig’s regular players on average. Laimer is a strong runner: 11.18 kilometers per game means third place internally. But it is also true that he can still improve in terms of duel (49%) and pass rates (80%).

And yet: Laimer is a driving force that arouses desires. His contract with RB runs until 2023. Conversations are loud picture only planned after the end of the season.