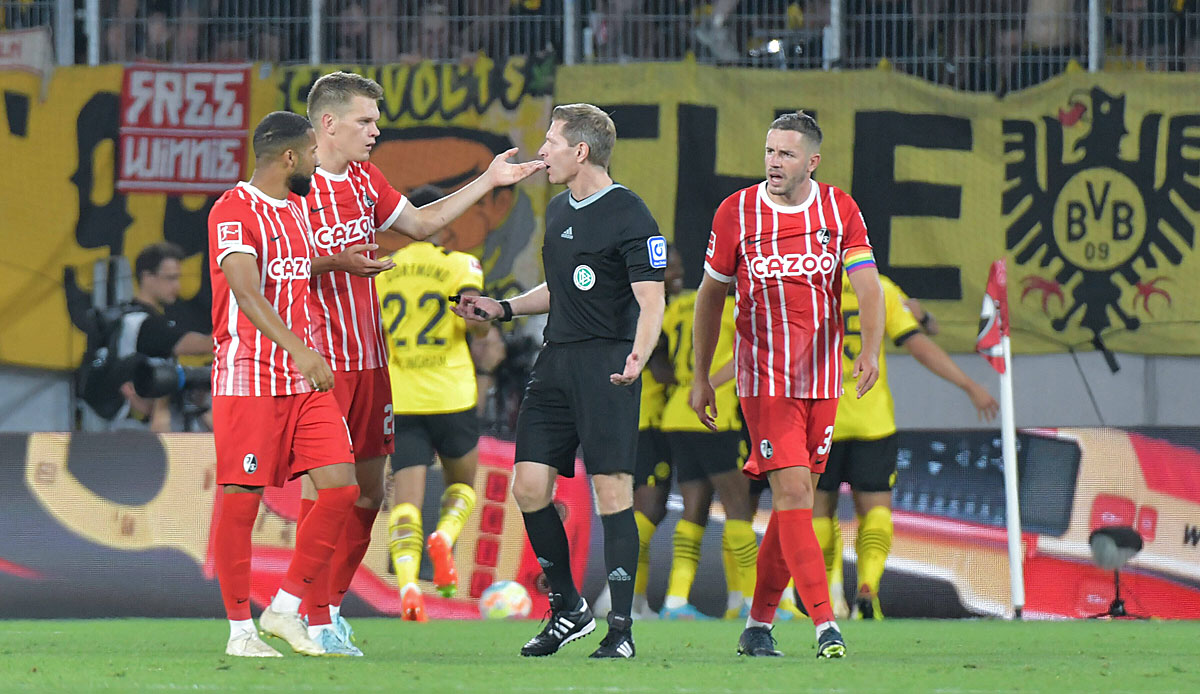 DFB project manager Jochen Drees explained how the irregular BVB goal and the VAR error could have happened. With a defender on the siding, there is probably a contingency plan. An ex-Dortmund striker is drawn to the Emirates. News and rumors about the Black and Yellows can be found here.

You can find more news about the Dortmunders here.

BVB, News: That’s why there was an irregular Dortmund goal

The third Dortmund goal in the final stages of the 3-1 win at SC Freiburg shouldn’t have counted. Marius Wolf fired a left-footed shot into the far corner on the right in the penalty area, but Youssoufa Moukoko was offside and irritated SC keeper Mark Flekken, who was almost touched by the striker. However, there was no intervention by the video assistant Günter Perl, who also had a VAR assistant (Norbert Grudzinski) who specializes in offside at his side.

When Wolf scored, “the VAR team recognized the offside position of the Dortmund player Moukoko and his action near the Freiburg goalkeeper Flekken. However, the VAR team did not perceive Moukoko’s influence on Flekken as clearly and also the question about denied Flekken’s realistic chance to defend.”

Drees’ conclusion: “Ultimately, this is a case of a technical misjudgment of the situation. Our expectation would have been that the VAR team would correctly assess the scene and recommend an on-field review to the referee because of the sovereignty of interpretation. He would have there then have to come to the conclusion that the goal should not count for an offside offense.” However, he qualifies: “The case is not easy to evaluate. If the ball had hit the near corner out of Flekken’s reach, it would not have been a criminal influence on Moukoko.”

Ex-BVB striker Paco Alcácer will play for Al Sharjah SCC in the United Arab Emirates. On Wednesday, the club announced the commitment, which is initially on loan. The 28-year-old has played for Villarreal since leaving Dortmund and has recently been linked with a return to the Bundesliga and a move to FC Valencia.

Among other things, the 19-time Spanish national player was offered to the two Berlin clubs Union and Hertha as well as BVB. Alcácer’s contract in Villarreal ran until 2025, whether Al Sharjah had secured a purchase option was just as little known as other details of the deal.

Alcácer joined BVB in 2018 for 23 million euros, scoring 43 goals in 124 games. Alcácer’s place in the squad could reportedly go to Edinson Cavani, who is without a club following the end of his contract at Manchester United.

After the “Mit Schmackes” ex-BVB player Kevin Großkreutz opened his second restaurant. How he up Instagram announced, the restaurant in Dortmund’s Kreuzviertel bears the name Westfalenschenke.

“We are proud and grateful to be able to officially take over the traditional location in the former ‘Barrock/Kumpel Erich’, and we also know about the associated expectations,” writes Großkreutz, who will run the Westfalenschenke like the first restaurant with his business partner Christopher Reinecke .

The Westfalenschenke is located on Kreuzstraße and is therefore on the route that many fans take on their way to Signal Iduna Park. The renovation work is “in full swing”. Großkreutz was born in Dortmund and grew up in the Eving district. He played 236 games for BVB and celebrated two championships and a cup win.