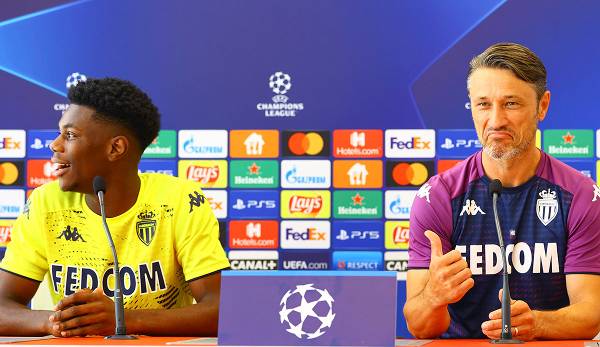 Niko Kovac and Max Kruse work together at VfL Wolfsburg. A duo that couldn’t be more different and even the bosses of the wolves don’t know if a collaboration works. The fact that Kovac praises his attacker and compares it to Thomas Müller from FC Bayern is not good news for Kruse.

Such a sense of achievement at the beginning of the season is always a nice thing. It improves mood, boosts self-confidence and increases the urge for more success. It remains to be seen whether all of this happened to Niko Kovac when he came third in the vote for the sexiest coach in the Bundesliga.

This unexpected turn in the still young term in Lower Saxony will of course not affect the job of the Croatian. If he fails at the start of the season in Wolfsburg, he will not come to his superiors Jörg Schmadtke and Marcel Schäfer with the argument that people on the internet find him sexy. But at VfL Wolfsburg they are in good spirits that it will not come to that.

“Our impression is that we have gained someone who is good for the club, who stands for new passion and continuity and who brings us back the success that we didn’t have last year”, said Schmadtke soberly as usual. Passion and continuity – these are topics that have been talked about a lot in Wolfsburg in recent years.

What was enough to qualify for the Champions League under Bruno Labbadia and Oliver Glasner was rarely seen with Mark van Bommel and Florian Kohfeldt and made Wolfsburg a candidate for relegation. Sometimes at the top, sometimes at the bottom. The overall development fell by the wayside because with every trainer there was a new approach, new ideas and these ideas were obviously not always the best.

Of course, Kovac also comes up with his own ideas. But with him, as Schmadtke already indicated, you are clear about what you can get: Discipline, fitness, structure. Although Kovac was denied one or the other ability during his tenure at Bayern, the further away the time is, the more forgiving the voices sound and Kovac proved in Monaco that he is rightly credited with producing these qualities.

Aurelien Tchouameni, who joined Real Madrid from AS Monaco for €80m this summer, was recently asked who his best coach has been? The answer: “Without a doubt Niko Kovac! When he came to Monaco, I was a kid. Under his guidance I became a man.” Kovac gave the French that “art of defense demonstrated” and “taught to play the way I do today”.

And in Wolfsburg, too, they’re already noticing the caliber that’s on the side. “The coach pushes us every day. Hiding away at a workout when you’re having a bad day isn’t easy”says Wolfsburg defender Sebastiaan Bornauw about working with Kovac.

Jörg Schmadtke: “We will see how this can be combined with Niko”

Discipline, fitness, structure. You rightly think of Kovac, but less of Max Kruse. Don’t get the wrong impression: Kruse is not an undisciplined lazybones who doesn’t believe in rules within a team. But let’s put it this way: He has his very own standards for how to approach certain things and which not every coach likes. Success proves him right. 97 goals and 79 assists in 300 Bundesliga games aren’t easy to achieve, but he’s still not a player that every coach can handle.

As VfL boss Schmadtke at the beginning of July sky was asked whether Kovac and Kruse fit together, he didn’t know that exactly either: “You will see. Let the two work together and have an effect on each other – then we’ll see what comes of it.” He has known for a long time: “Max has a special approach to his job – an extraordinary talent. We will see how this can be combined with Niko.”

Even with Kruse that sounded in one ran.de-Interview still very vague: “I’ve never worked with Niko Kovac, so it’s very difficult for me to judge. It’s different now, you have to get used to it.”

In the meantime, a few weeks of training have passed in preparation and before the start of the season it is still not possible to give a final answer to the question of whether they fit together. At least one has indications that it is not an impossibility.

The Stations of Max Kruse

Niko Kovac and the comparison with Thomas Müller

“Max is a great boy, I only have positive things to say”says Kovac: “When he came to the performance tests, he was already at a very good level. We had a very good conversation. I know how important Max is to us.”

Also because Kovac knows Kruse “is a player”the “despite his 34 years, he can always score 15 goals per season and play five to ten more. Always!” But then the addition is piquant: “He has the quality that not many in the Bundesliga have. When he’s fit and physically able to do everything he can, he has skills like Thomas Müller.”

What initially sounds like great praise – after all, Müller is one of the best players in Bundesliga history – may even be taken as a warning in view of the past. Because Kovac was probably the only Bayern coach in Thomas Müller’s entire professional career who did not rely on him unchallenged. At the end of Kovac’s tenure in Munich, Müller sat on the bench for six weeks – longer than ever.

“If there is a need, he will certainly get his minutes”said Kovac about Müller in October 2021 and the emergency comparison hung on Kovac to the bitter end. An end that certainly had something to do with the voluntary renunciation of Müller. At the time, the Munich veteran even thought of saying goodbye, which is actually unimaginable.

Max Kruse flies in trainers and lets everyone know

Kovac would certainly handle Müller differently today. At least in the media, so as not to open a barrel that is publicly exhausted for weeks. At the time, Kovac was visibly annoyed by the questions about Müller in Munich. There are not that many reporters in Wolfsburg, but he can still assume that he has to talk about Kruse regularly.

About how he treats him. How he treats him. Under the well-meaning Kohfeldt, Kruse still had freedom. On and off the pitch. In the DAZN-Broadcast “decoded” Kruse spoke in March about the running work on the pitch: “Of course you can run 13 kilometers and get 12 of them wrong. I try to go the right way and to keep an eye on the game a bit and then I often get it right.”

Is that enough for a coach like Kovac who says the following? “If I don’t have the skills to walk 90 minutes, then I start calculating. Then I always save myself a way somewhere on the offensive, but also on the defensive. This means that certain situations on the offensive go swimming and you might concede chances or goals at the back. This is an important point for me.”

At least it seems as if Kruse understood that a different wind was blowing at his employer. During his summer vacation in the USA, the 34-year-old had a personal trainer flown in from Germany. Wife Dilara very cleverly shared on Instagram how hard Kruse works on vacation.

Among other things, she wrote: “Something is wrong with my husband. People! He goes to training every day, every day. This man is on vacation and going to work out. I think it has a shadow.” The wink should have reached everyone.

No matter how hard both guys try, Niko Kovac will never become Max Kruse’s model coach and Max Kruse will never become Niko Kovac’s model player. But that doesn’t have to be the case. If they find a golden mean, it could be a fruitful and successful cooperation. If not, the questions will definitely come back.