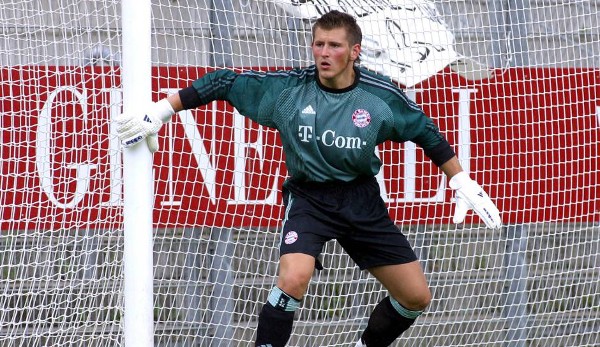 From the youth of FC Bayern Munich to the professionals of the record champions – a dream of many talents. But the path of Thomas Müller & Co. is not easy. Even an A-Junior championship is no guarantee for a long career. This is shown by a look at the champion team from 2004.

To determine the German champions, Hannover 96 played in the final round. 1-0 at home and 2-1 away, they beat the red shirts and advanced to the final.

On June 27, 2004, the Bayern youth met the U19s of VfL Bochum in the Unterhaching sports park. FCB won 3-0 and secured the U19 Bundesliga championship.

We take a look at the squad at that time and reveal what became of the title holders.

After the season, goalkeeper Johannes Höcker went up to the second team. After just one season, he was drawn to the second division of HSV, for which he played for three years.

Since then he has played for smaller clubs in the Hamburg region such as Eintracht Norderstedt or currently for Concordia Hamburg in the Oberliga.

Timo Heinze stayed in the U19s for another year and then went up to second place in Bayern.

After four years, the right-back moved to Unterhaching, but he only played there for one year. After another season at Fotuna Cologne, he ended his career.

After three years in Bavaria’s U23s, Jan Mauersberger switched to SpVgg Greuther Fürth. For the shamrocks he ran for five years.

This was followed by a season in Osnabrück, four in Karlsruhe and three at 1860. He played a total of 180 second division games.

He went from Bayern II, first on loan and later to VfB Stuttgart for 3.5 million euros. Georg Niedermeier played for VfB for six years.

He was then active in Freiburg for two more years before leaving Germany and moving to Australia. He then ended his career at Melbourne Victory.

Bayern brought the left-back from Ulm back then. Michael Stegmayer made it into second place and went from there to VfL Wolfsburg.

After several clubs, especially in the 3rd division, he switched to SV Darmstadt 98 in 2012. With SVD he was promoted to the Bundesliga, then ended his career in 2016 and has been team manager at Lilien ever since.

At Bayern it was not enough for Markus Steinhöfer for more than the U19. Therefore, he was first loaned to RB Salzburg and later sold to Eintracht Frankfurt.

But even there he could not assert himself. This was followed by eight different clubs (including Betis Sevilla). In the summer of 2019 he ended his career at home with VfB Eichstätt.

Andreas Ottl made it into the professional squad the following year. The clearer stayed at FC Bayern for a total of five seasons and played almost 100 games.

He then played for Hertha BSC and FC Augsburg, where he ended his career ten years after winning the A youth championship. Since 2018 he has been a consultant at the ROOF agency, which represents the two Munich-based Serge Gnabry and Sadio Mané, among others.

After two years in the second team, where he only played sporadically, he moved to SC Fürstenfeldbruck in the Oberliga in 2006.

However, he left the club after just a year. Since then, the trace of Rehm has been lost, a new club after 2007 is not known.

Bayern brought the Croatian from home to the U19s. After three years at the second Borut Semler moved back to hometown club NK Varazdin.

Stations in Slovenia, Kazakhstan and Austria followed. In Austria, the tener last played at USV Hengsberg, but ended his career in the summer of 2021.

Paul Thomik moved from FC Gütersloh to the FC Bayern youth academy in 1999. After the A junior championship, he made it to the second.

After just one year, however, Thomik decided to switch to SpVgg Unterhaching and later to VfL Osnabrück. After numerous positions, he went to Heimstetten in 2016, where he hung up his football boots after the 2021/22 season.

The Bolivian came to Munich at the age of 15. Since his contract was not extended after two years in the FCB reserves, the striker went to Saarbrücken.

He then moved back home to Bolivia via Slovenia and Uruguay. First he played for CD Oriente Petrolero for a year and a half, then for Real Potosi for a year before retiring.

Like many players before, Fabian Müller did not make the breakthrough at Bayern. The left-back made a career nonetheless.

Müller played for Erzgebirge Aue, 1. FC Kaiserslautern, Dynamo Dresden and Chemnitzer FC. Overall, he made 207 games in the 2nd Bundesliga. From 2019 to 2020 he ended his career at FC Pipinsried.

After his time at Bayern, the right midfielder switched to RB Leipzig via Fortuna Düsseldorf and Arminia Bielefeld.

Sebastian Heidinger played for the Saxons for five years before moving to 1. FC Heidenheim. After stints at Greuther Fürth, SC Paderborn and Holstein Kiel, he came to FSV Wacker Nordhausen in 2019, where he played in the Oberliga and then ended his career.

After the U19s, the time at Bayern was over for the left winger. Holjevac tried it with the second team of SpVgg Unterhaching.

But things didn’t go well for him there either, which is why he took another step back after just one season. The Croatian moved to the district league team TSV Großhadern, where he lost track.

Despite only a few appearances in the U19s, the clearer made the leap to the amateurs. He was in the second team for two years until he joined TSV Aindling.

He played for three years with the state league team before moving to FC Ismaning. From there it went to TSV Landsberg. In total, he made over 200 games in the Bayernliga before his career came to an end in the summer of 2021.

Not in the squad: Max Grün

The then 16-year-old Max Grün was still eligible to play for the B-Juniors, where he mainly got match practice, but was also taken to the U19s from time to time. Although he wasn’t in the squad for the final of the A-Junior Bundesliga, he made a decent career afterwards.

After two years with the U19s and three more with Bayern’s reserves, he moved to SpVgg Greuther Fürth in 2009. Because he did well there – among other things, he rose to the Bundesliga with the Fürth team and bought him in 2018 from VfL Wolfsburg. Grün was number two for the Wolves for a long time and made twelve appearances for the VfL professionals before moving to Borussia Mönchengladbach in 2019 as number three. He has been working for SV Victoria Aschaffenburg in the regional league since summer 2021 and plays there as a regular keeper.