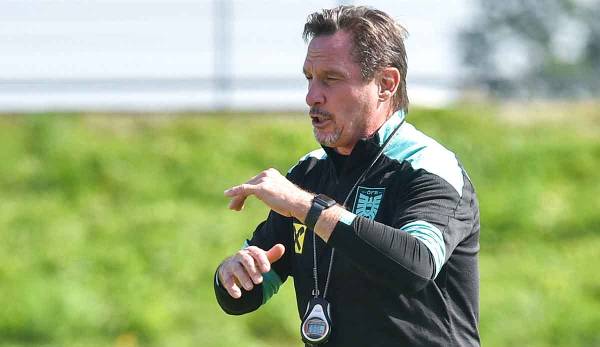 Konrad Laimer is coach Julian Nagelsmann’s declared dream player at FC Bayern Munich. What makes him so strong? And how does he tick away from the pitch? In an interview with SPOX and GOAL gives his former U21 national coach Werner Gregoritsch insights.

From 2016 to 2018, Laimer made a total of 13 U21 internationals under Gregoritsch. The 25-year-old midfielder then rose to the senior national team. After his training at RB Salzburg, he switched to RB Leipzig in 2017, where he no longer wants to extend his contract, which expires in 2023 – presumably to switch to Bayern Munich.

Gregory: Konny is the most intense soccer player I know. He is the ideal player for modern pressing football. Although he doesn’t shout and gesture a lot, he is always present on the pitch. With his positive aggressiveness, he chases after every ball for 90 minutes and infects his entire team. Everyone likes to have him as a teammate.

Which moments with him do you remember most?

Gregory: Once we won 1-0 against Holland, they had a great team back then. In front of the goal he ran into the goalkeeper with a 20 meter full sprint and forced him to make a bad pass. I also remember a training game. His team was outnumbered, which is why I saw no point in it and wanted to stop the game. But Konny refused, absolutely wanted to continue playing – and in the end actually won with his team.

To what extent has he developed during the time together?

Gregory: Because he works so hard against the ball, his concentration used to drop after winning the ball. That’s why he played too many bad passes. He’s improved a lot in that regard. He has also improved technically: Konny was never a great technician, but worked hard on his dribbling and his passes.

Before the U21 European Championship in 2019, Laimer was present in the decisive qualifying games, but was ultimately not in the tournament squad. Why?

Gregory: He was completely exhausted after the season and absolutely had to regenerate. That’s why Leipzig didn’t release him for the tournament. It was a sensible decision, but it made him very sad. During the tournament he was in constant contact with the team and wrote a lot of messages. Incidentally, he announced the successful qualification for this U21 European Championship two years in advance.

Gregory: We just missed the 2017 tournament. We were only eliminated in the play-off against eventual finalists Spain on the away goals rule. Then we sat together sadly, have something to drink. That’s when Konny and Xaver Schlager spoke up and said: “Coach, we can promise one thing: we’ll be there at the next European Championship.” I will never forget this moment. This is how we emerged stronger from this negative situation.

Laimer and Xaver Schlager played together for a long time when they were youngsters at RB Salzburg, and both are now senior internationals. Do you have a special relationship with each other?

Gregory: The two are like twins, they could be blood brothers. Xaver and Konny went all the way through youth together. They understand each other blindly on and off the pitch.

Schlager joined RB Leipzig this summer. Presumably as the successor to Laimer, who does not want to extend his contract and has aroused the interest of FC Bayern. Would a move to Munich be the right move for him?

Gregory: Absolutely. Konny has reached a status that allows him to be a regular in any top team in the world. If he goes to Bayern, he won’t be afraid of competition. Any big names don’t interest him at all.

How does Laimer tick off the pitch?

Gregory: You don’t even recognize him there. While aggressively chasing every ball on the pitch, on his own he is a very calm, controlled, measured guy. I’ve never heard it loud, it’s hardly noticeable. Although Konny likes the community, he is more of an observer. He has great respect for hierarchies. He can’t do anything with the fuss about professional football. Every young player should take him as an example.

Does he have other sports passions besides football?

Gregory: Konny is a very good skier. And because of his physique, he could have achieved something in athletics one hundred percent.

Here is a detailed interview with Werner Gregoritsch about the stubborn Martin Hinteregger, the special case of Sasa Kalajdzic and his funny son