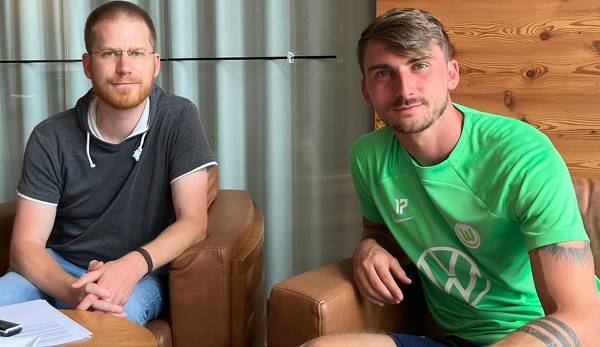 Maximilian Philipp once switched from SC Freiburg to Borussia Dortmund as a high-flyer for a lot of money, but the 28-year-old’s star began to decline at BVB. During his time at Dynamo Moscow, Philipp seriously considered ending his career prematurely.

In an interview with SPOX and GOAL, the offensive player talks about his father’s early death and explains how strongly he influenced young Philipp.

In addition, the native of Berlin talks about the difficult time at BVB, the thought of ending his career in Russia and says what he doesn’t like about his body language.

Mr. Philipp, during your time in Freiburg you once said that your faith is “extremely important” to you. How do you practice it?

Maximilian Philip: That was a bit exaggerated at the time. I believe in God, but I don’t pray daily or go to church weekly.

You also said that without faith you would not have made it this far in football.

Philip: Absolutely. In my opinion, the path I have taken in my life so far is not accidental, but predetermined. That’s how it’s supposed to be. At least that’s how I feel. There are good times and less good times, from which one learns. In the end, that’s what makes you who you are. That encourages me, but everyone has to know for themselves which path they choose.

Did you still see the meaning of faith when your father died of cancer in 2011? You were only 16 years old at the time.

Philip: No, I had serious doubts about that. A world collapsed for me. When that happened, I didn’t believe in anything anymore, I just thought: How did I deserve this, why me? My parents are the most important people in my life. And all of a sudden I was standing there after school and had to see how some of my friends were being picked up by their dad. It was all very, very hard and it did something to me.

What bond do you still have with your father today – perhaps also because of your faith?

Philip: An extreme. Through this experience I learned a lot and gained incredible strength. I got an attitude that got me to where I am now. I’ve become very strong, but also, in a way, very cold. That’s just the way it is.

What does very cold mean?

Philip: When you lose someone you really love, you develop a kind of protective shell or armor around yourself. There were many situations that didn’t matter to me at all because I had to learn that there were simply more important things. Sure, sometimes that was a disadvantage, but mostly it turned out to be an advantage for me.

That was eleven years ago – that’s how long you’ve been playing senior football. Back then you started out in the second team of Energie Cottbus in the regional league. A lot has happened in your career since then. Does it feel to you as if eleven years have already passed?

Philip: no It’s often surreal because I can still remember some things as if they happened yesterday. Time flies insanely fast. I celebrated my professional debut in Cottbus and suddenly played in the Bundesliga in no time. It was only uphill from there. At the time, I found it amazing how quickly it happened. Unfortunately, I have now also had to realize how quickly things can go in the other direction.

In 2013 you switched to the U19s at SC Freiburg, and just over a year later you made your Bundesliga debut. You are said to have been a bit cheekier during puberty and quickly realized in Freiburg: I ​​won’t get very far here with that kind of personality.

Philip: After my father died, I had two sides. Shortly afterwards I went to Cottbus for a year and a half and was very irritable there. I didn’t let anyone tell me anything and always said what I was thinking directly. I didn’t think much, neither on the field nor at school. I didn’t care. I have to admit that that helped me a lot too, because it gave me a certain amount of respect.

So why was it different in Freiburg?

Philip: It kind of clicked there. I don’t know how or why, but I realized that if I really want to rise professionally, I need to calm down and reflect on who I really am. I’m actually a pretty quiet guy and was brought up very well. I’m not pushy, arrogant or annoying, but rather reserved and fun. When I was with my family or friends, I could always show this normal side that I’ve had all my life.

After a strong year in the second division and a good season in the Bundesliga, you finally made your breakthrough in Freiburg. They moved to Borussia Dortmund for 20 million euros. Why did you want to take this big step directly?

Philip: It was Borussia Dortmund – if you cancel, how many more chances do you get to play there? I also had a long-term contract in Freiburg, which is why the transfer fee was so enormous. Not everyone could afford it, so a few clubs dropped out. When BVB calls, you don’t say no. It also has absolutely nothing to do with money. The club is very attractive from a sporting point of view and has these absolutely insane fans in a positive sense. There wasn’t much to think about.

Despite a good start, you were not able to assert yourself at BVB and left the club after two years. Looking back, would it have been better if you had taken an intermediate step after Freiburg?

Philip: You are always smarter in hindsight. Of course I’ve already thought about what would have happened if I had taken this intermediate step. But I have to say quite clearly: I would do it the same way again. I just couldn’t turn Dortmund down, I was wanted there too.

You had three very different coaches at BVB in Peter Bosz, Peter Stöger and Lucien Favre. In your second season in particular, you were almost exclusively on the bench and only made eleven starting XI appearances. How did Favre justify the little playing time to you?

Philip: He didn’t have to give a great reason for that. I played as a classic striker in my second year and scored one goal in the first eight Bundesliga games. If that’s your record at Borussia Dortmund, it will be difficult. That’s perfectly clear. It just wasn’t my position and you could see that.

How did you fare during this phase?

Philip: It was difficult, because first the disappointment built up and eventually it turned into frustration. I ate it up inside myself for a while. But I was far from making a stink or being particularly negative. When I talked about it extensively with friends, I managed to deal with it better. It dawned on me that things can’t always go up. Unfortunately, such experiences are part of it. Sitting on the bench at BVB doesn’t automatically mean that you’re a bad player.

Did your mood change when it became clear that you were leaving Dortmund, or did you end up moving to Dynamo Moscow as well?

Philip: I already had it in the back of my mind. It was clear that not everything would work out great right away. On the other hand, it was a real new start for me. I was quite confident.

You scored nine goals in 29 competitive games in Moscow, but you also thought about retiring. When did the idea first come up?

Philip: More towards the end. The corona pandemic in particular made it very difficult for me. I had nowhere to go, was really far away for the first time and completely cut off from my family, at least physically. We haven’t been able to visit each other for a very long time. That was really bad for me. Only once was it possible for me to meet my girlfriend in Turkey. I’m a family man and I need my friends. I just don’t enjoy it without her, I have to be honest. There are a lot more important things than football. As discussed, I recognized that early on, but during this phase I became very aware of it again.

Maximilian Philipp: An overview of his career as a professional