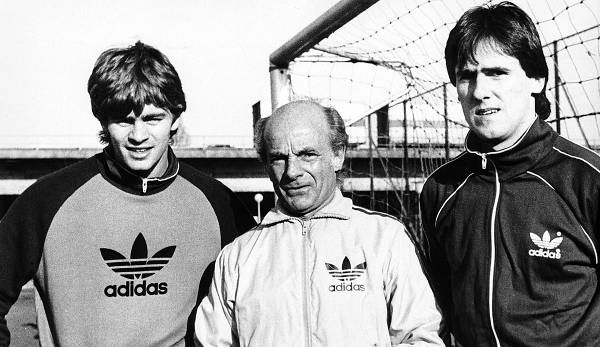 On the fringes of a European Cup game, Falko Götz fled East Germany in 1983 and became a Bundesliga professional, UEFA Cup winner and leading player at Galatasaray. As a coach, he shaped Hertha in the 2000s, coached Vietnamese footballers and had a special experience in the Ore Mountains. In an interview with SPOX and GOAL Götz looks back on his career.

The 59-year-old former offensive player talks about the escape evening in Belgrade, football in the 80s and 90s and the special role of success in Turkish football.

Today he is a scout at Bayer 04 Leverkusen and explains why nobody wears a Bayern shirt in Aue, why he went to Vietnam in 2011 and what Hertha BSC has to prepare for with Felix Magath.

Mr Götz, fleeing East Germany on the sidelines of a European Cup duel with BFC Dynamo was crucial for your career. What memories of that evening in November 1983 remain?

Falko Goetz: Some of that is still there. At the age of 21, that was a pretty drastic experience in my life. In the evening, Partizan Belgrade was waiting, before we went shopping around lunchtime. We took the bus downtown and then got free time to spend our money. Back then you got daily allowances, not in Deutschmarks, but in Yugoslav dinar. That’s why the management had to give us the opportunity to spend the money. And that was the chance to escape. I went to a shopping center with Dirk Schlegel, we saw a small exit there and ran away from the team. From the taxi stand we are then to the German embassy.

How did it go for you?

Goetz: From then on everything started from scratch, yes, actually even with debt. I went over without anything. I just wanted to leave the GDR. I wanted to play in the Bundesliga and obstacles were put in the way of my development as a professional soccer player because of my western relatives. Professional football wasn’t possible anyway, and I was denied professional prospects despite good school performance. I have never been promoted. That’s why I wanted to go to the Bundesliga and try my luck there.

How did you imagine the football world in Germany when you were on the train to Munich?

Goetz: That didn’t matter at the moment. I already had an image in my head because I knew I wanted to play there. While I was in the taxi, and later on the drive in the embassy car from Belgrade to Zagreb, many things went through my head about my family and my escape. Because in that moment I realized that the step is final. There was no turning back.

When you arrived in Germany, you were able to gain a foothold at Bayer 04 Leverkusen, with the then manager Reiner Calmund paving the way. How do you remember?

Goetz: Calli came into play somewhere as a second, third or fourth person. The most important contact person for football in the Federal Republic was actually Jörg Berger, whom I knew from the GDR junior national team. At that time, Leverkusen had just established itself in the Bundesliga and was up and coming. There wasn’t that much pressure from the environment and the media. Actually the perfect start for Bundesliga newcomers.

In retrospect, footballers are often measured by titles. Among other things, you can point to a UEFA Cup triumph here – with a diving header goal in the second leg of the final against Espanyol Barcelona, ​​you were even actively involved for Leverkusen. A satisfactory record?

Goetz: Yes, it definitely made sense that I scrambled out west. Because I don’t think that this triumph would have been possible with a GDR team, and certainly not with Dynamo Berlin. Reiner Calmund, as sporting director, took me under his wing and built me ​​up, especially during the year I was suspended.

Did your character as a GDR athlete influence individual decisions later in the Bundesliga?

Goetz: Let’s put it this way: I made my biggest life decision at a young age. That gave me self-confidence for the rest of my life.

You later played for Cologne, Saarbrücken and Hertha BSC, among others. How much of the German football of the 80s and 90s is left today?

Goetz: Soccer players are perceived very differently today. Today they are idols. They are role models for generations that have followed them. The pay back then was very different than it is today. Players get about as much a month today as we did a year back then, including bonuses. Of course, that shows the attractiveness of football. But I’m free from envy. That’s how football developed. Due to the high quality of the Bundesliga over the years, we have become a nation that has the most spectators. That’s great.

They even had the chance to play at Galatasaray for two years. During this time you played in the Champions League and were twice Turkish champions and cup winners. How did you get to know Turkey and football there?

Goetz: That was just the beginning of a very good time in Turkish football. I’ve played with players like Hakan Sükür, Tugay Kerimoglu and Bülent Korkmaz, who finished third at the 2002 World Cup for the greatest success in Turkish football history. Thanks to the success, we were also able to enjoy our private life – because it is very important to be successful in Turkey. A defeat makes a big difference in public.

What fascinated you about the Turkish football mentality?

Goetz: There was always an amazing atmosphere. The derbies were hot. Unfortunately not always free of violence, but nice. When we beat Manchester United in the 1993 Champions League qualifier, Istanbul was on fire. You were so proud of the team. Galatasaray will invite me later today. Tradition is very important in Turkey.

In 1997 you went to the Bundesliga with Hertha BSC, after which you ended your career. In the city you fled 14 years earlier. Does this symbolism play a role for you?

Goetz: You can’t plan something like that. That was a stroke of luck. I was struggling with injuries at the time and got my coaching license. Finally, I had an offer as a coach at the club.

Falko Götz: The performance data of his professional career