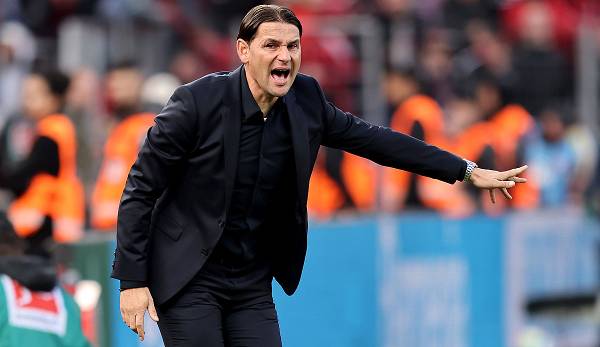 Bayer Leverkusen is stuck deep in the table basement. The situation after the 1-1 draw against Werder Bremen is tense.

It’s getting tight for Gerardo Seoane. The bosses of Bayer Leverkusen did not talk to the coach, but (also) about the coach in a crisis meeting on Sunday.

“We are all extremely dissatisfied,” said sporting director Simon Rolfes after the disappointing 1-1 (0-0) win against Werder Bremen. Going into the game at Bayern Munich on September 30th with the Swiss is at least the “intention”, added Rolfes.

There have been more passionate pledges of allegiance in the Bundesliga – after the sixth game without a win in the seventh game of the season, there is a mood of crisis. Table cellar instead of European Cup place, that is the bitter reality under the Bayer cross.

Seoane didn’t mince words either. “There are always several analyses,” he said: “The performance, but also the points, because that’s what it’s all about in the end. And that’s where we’re unsatisfied and unsatisfied.”

After a wild encounter marked by many shortcomings, Leverkusen struggled as so often with the exploitation of chances. Bayer pushed through again and again through his fast wingers Jeremie Frimpong and Piero Hincapie. The majority of the 20 flanks ended up with a Bremen player.

“We play very, very well on the flanks, but then the pass is very, very often missing,” said Andrich, emphasizing: “We have to work on that. That must be one of our strengths, because we always get past with our speed. “

The behavior after Kerem Demirbay’s opening goal (57th), which was well worth seeing, was inexplicable. Bayer became extremely passive, let Bremen take control of the game and couldn’t complain that Milos Veljkovic (82′) equalised. Leverkusen’s captain and keeper Lukas Hradecky made an unfortunate impression.

“The focus is going forward. We now have a short break in which we can reflect again and think about what we need to do better. It’s clear that things can’t go on like this,” said central defender Jonathan Tah. Andrich added combatively: “We’re going to Munich to take something with us.”

Further analyzes are to follow in the coming days – then also with Gerardo Seoane.