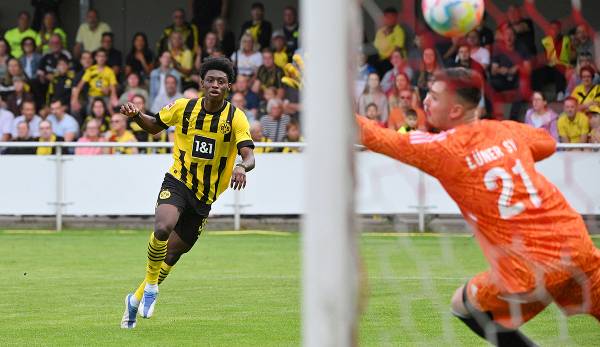 Borussia Dortmund has completed the first test match, but did not cover itself with glory in the 3-1 win against the Westphalian league club Lüner SV. A duo is positive for coach Edin Terzic. However, this has changed some processes at BVB. And: An ex-BVB striker praises an ex-BVB striker. Here you will find the latest news and rumors about BVB.

Borussia Dortmund played their first friendly against amateur club Lüner SV, but the 3-1 win revealed that the training sessions had obviously been tough recently and that Edin Terzic still has a lot of work to do. Nevertheless, the BVB coach also saw positive things.

On the one hand there is new signing Prince Aning, who was one of the few players to play through and contribute a goal. “Prince Aning drew attention to himself with his first goal,” praised Terzic, but added: “We didn’t have enough of such scenes today.”

Mats Hummels was also praised. Terzic: “He’s fresh, motivated and very fit. He’s had time to regenerate his head and body, but he trained very well on vacation.”

Edin Terzic has the scepter in his hand again at BVB – and Marco Rose’s successor packs certain things differently than his predecessor. Above all, Terzic wants to bring the team, employees and fans closer together again. Noisy sports picture it is important to him and BVB sports director Sebastian Kehl to organize more public units again so that the fans can get closer to the team again. Under Marco Rose, that has recently become noticeably less.

But not only that is different under Terzic. While Rose often handed over the preparation for training to his assistants and above all Alexander Zickler, Terzic has so far set it up himself, even checking lawn irrigation and the like.

Striking: In the units themselves, Terzic lets his assistants do a lot, especially Peter Herrmann then often takes command, while Edin Terzic intervenes only rudimentarily as an observer.

A “mini-Haaland” for 1. FC Köln? Newcomer Steffen Tigges verbally bowed to his former Dortmund teammate Erling Haaland – and believes he “copied a lot” from the goal machine from Norway.

“Erling is clearly one of the best strikers in the world. He’s always impressed me. The way he creates situations himself, with his movements, his dynamism – that’s unbelievable. He’s never satisfied and keeps trying to improve even the smallest things “Said the 23-year-old Tigges full of admiration for Haaland, who was two years his junior, who switched from BVB to Manchester City.

Tigges, who had been in Haaland’s shadow for the past year and a half (22 competitive BVB games, three goals), joined the Conference League participant from Cologne in early July. FC transferred an amount in the low millions to Dortmund for the 1.93 m tall striker.