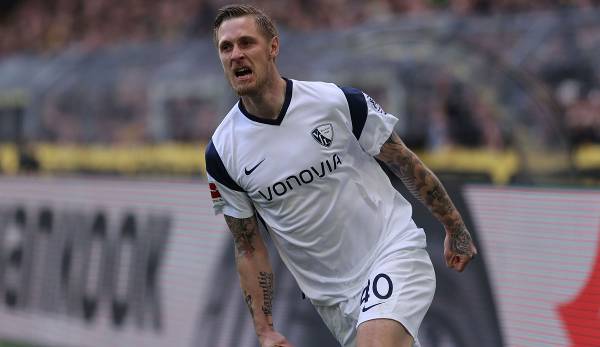 Sebastian Polter switched to VfL Bochum in the summer of 2021. With nine Bundesliga goals, the striker played a key role in the relegation of the promoted team. After numerous changes of location in his career, the 31-year-old has found his home.

In an interview with SPOX and GOAL, Polter talks about his “worst moment ever”, his departure from Union Berlin and the goal of remaining in the Bundesliga with VfL Bochum next season. Bochum secured this last Saturday in a 4-3 win over BVB, in which Polter scored to make it 1-0.

Mr. Polter, you have been a professional soccer player for more than ten years: What is the most important thing about your job?

Sebastian Polter: I have the best job ever, it’s my absolute dream job. I still have that passion and pride of being able to drive to practice every day that I had as a kid and then as a teenager. This is very important to me. But I also have a very special job with all sorts of risks – especially health-related – and also some hardships. The most important thing is that my family accepts my job as it is. That she appreciates him and lives with it.

The fear of the next big injury plays a rather subordinate role?

pile: At the beginning of my career I had quite a few injuries: a broken metatarsal on the right and left and two dislocated shoulders. And that within the first two years. At that time it was said that these were fatigue fractures and the question arose as to how well I could cope with the leap from youth to men’s division.

Did you have any doubts?

pile: I had to ask myself whether I was in the right place here and whether I could – purely physically – handle everything like this. But then that was resolved after the second shoulder injury and I was around six years without any major injuries.

Polter: That was “the worst moment ever”

Then the Achilles tendon tore.

pile: That came totally out of nowhere. I was a professional in the Bundesliga and in the 2nd division, then also in England and it went pretty well. I was in full swing, my career had really picked up speed. And then this: The worst moment ever.

Were you concerned about making the return again?

pile: I’ve learned over time to stay mentally strong even when things aren’t going well. That helped me a lot. And it ultimately made me the player I can be now: with around 100 Bundesliga games and a few goals on the clock. And I’ve never been relegated, that’s actually very important to me.

The Achilles tendon rupture happened during the time at FC Union, in Berlin things only went uphill after the injury.

pile: I got back in quickly after rehab and we hit the ground running. As a footballer, there is nothing better than getting promoted with your team. We did that and as a kind of “crowning” we also managed to stay up in the league.

Was the decision to go abroad again after the Union chapter a conscious decision or was it forced in the absence of offers?

pile: I also had other offers, but I deliberately wanted to stay a little off the radar of German football. I wanted to concentrate fully on myself and my own performance without any media interference. I came to Sittard with the full conviction that I can be important in the team there. I felt like I was needed there. For me it is just incredibly important to experience this appreciation. Then I can help a team – because I’m absolutely convinced of my abilities.

However, the starting position when you switched in the summer of 2020 was difficult: Because of Corona, many clubs had massive financial problems, no one knew exactly how things would continue. Not an easy situation for a player looking for a club.

Polter: Bundesliga return “almost like from a picture book”

pile: That is correct. The clubs weren’t exactly in line, most of them keeping a low profile when it came to transfers. Nobody knew exactly where the pandemic would take us. Perhaps my advantage was that I was available on a free transfer and had a comparatively wide range of experience. In any case, there were other lucrative offers, both financially and in terms of perspective. But I really wanted to go abroad and Sittard was a perfect solution.

So no supposed step backwards?

pile: The exact opposite. In Sittard I was able to take on the role in the team and in the club that was discussed with me beforehand. With everything that went with it: with the club’s role in the league, with Corona and the lack of spectators. I haven’t played a game in Holland in front of a bigger crowd.

Then last summer came an offer from Bochum.

pile: The fact that I was able to return to the Bundesliga like this was almost like a picture book. That’s what I wanted: to play in the Bundesliga again with a traditional club. VfL Bochum and I: That’s pot and lid.