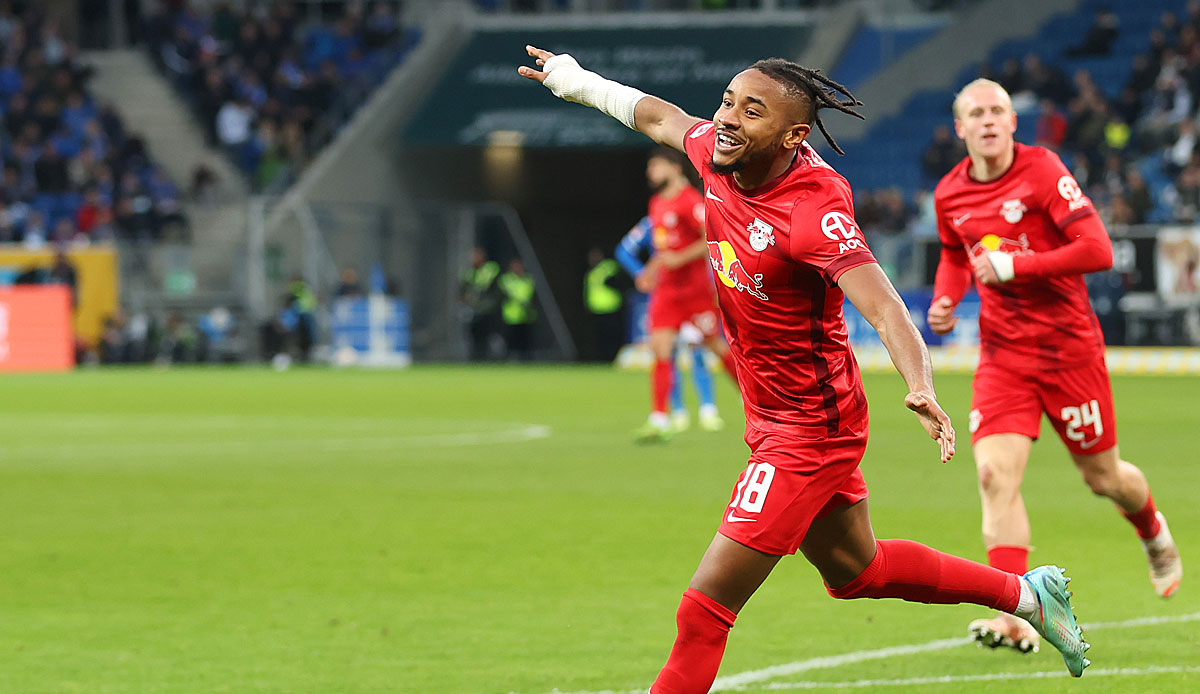 RB Leipzig continues its winning streak even without the injured Timo Werner. Two goals from Christopher Nkunku make it 3-1 (1-0) at TSG Hoffenheim.

Coach Marco Rose gave Christopher Nkunku a warm hug as he came off the field just before the end. The whistles of the Hoffenheim fans also made it clear who the man of the match was: With a brace, the French RB Leipzig not only secured the 3-1 (1-0) victory at TSG, but also let Timo Werner’s failure for 90 minutes forgotten.

“It’s just fun to watch Christopher,” said RB goalkeeper Janis Blaswich after the eleventh competitive game in a row without defeat: “But I don’t want to lift him out, the others are too strong for that.” The 31-year-old didn’t want to forget Werner either after the first away win of the season: “It’s definitely not an easy situation for Timo, we stand together and support him.”

The Saxons put away the shock of the injury and the national player’s World Cup elimination, Nkunku (17th/57th) scored twice. There was also a goal from the no less strong Dani Olmo (69th). The TSG goal by Georginio Rutter (50th) did not change the Hoffenheim bankruptcy. “After the break it was our turn, then we punish ourselves with our own mistakes,” said Hoffenheim defender Kevin Vogt on Sky.

Before the game, Werner’s injury and the departure of RB managing director Oliver Mintzlaff were the focus. National striker Werner suffered a syndesmosis tear in the Champions League game at Shakhtar Donetsk (4-0) on Wednesday and will be out for the World Cup in Qatar (November 20th to December 18th). Mintzlaff is moving to the top management of Red Bull.

“I would like to join the supervisory board to pass on my experience,” said Mintzlaff before kick-off sky: “I believe that I can help in my future role.” It is still unclear whether Mintzlaff will be replaced externally or whether his tasks will be distributed within the club.

The 23,127 spectators in Sinsheim saw a game without highlights in the early stages. After 15 minutes, Hoffenheim midfielder Grischa Prömel had to be carried off the field with an obviously serious ankle injury. Just a few seconds later, Nkunku scored with a free kick, which is worth seeing. It was the Frenchman’s tenth goal of the season.

Hoffenheim reacted offensively to the deficit. Croatian Vice World Champion Andrej Kramaric replaced Prömel. After a lapse by Josko Gvardiol, Rutter was unable to take advantage of the great opportunity to equalize (25′). In injury time in the first half, Marcel Halstenberg had the second RB goal on his feet (45+4).

At the beginning of the second round, Leipzig became a bit more careless – the penalty followed immediately. After a cross from Angelino, who was loaned to Hoffenheim by RB, Rutter hit his head.

The goal shook the guests awake. RB pushed for the lead again, Nkunku was back on the spot. The third Leipzig goal by Olmo was also deserved.

Hoffenheim vs. Leipzig: The dates of the game