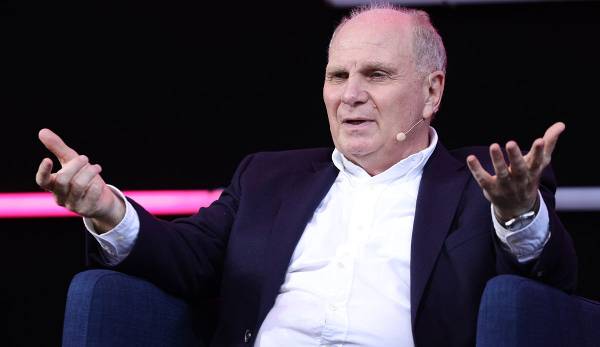 Uli Hoeneß sees the future of German football critically and therefore has advice for the competition from Bayern. He also commented on Robert Lewandowski.

Uli Hoeneß not only sees the Nations League and the associated increased strain on the players as a problem, but also the sporting competitiveness of the Bundesliga at international level.

In conversation with the editorial group G14Plus The honorary president of FC Bayern said he was concerned about the “discrepancy between German football, French football with the exception of Paris Saint-Germain and, to some extent, Italian football compared to countries that have mainly Arab money, but also billions of dollars in American money”.

He probably meant the Premier League in particular, which has always been shaped by financially strong international sponsors.

However, that brings Hoeneß to a clear conclusion: “If the Bundesliga – this does not apply to Bayern Munich – does not think about abolishing the 50+1 rule, we will have big problems in being able to keep up internationally in the long term.”

50+1 states that German clubs must always hold at least 50 percent and one share when the professional department is spun off, so that the club and no investor always has the decision-making power.

Uli Hoeneß insists on a contract with Lewandowski if …

Hoeneß keeps FC Bayern out of this discussion because according to the statutes, only a maximum of 30 percent of its shares may be sold. FC Bayern Munich eV currently holds 75 percent of the shares in FC Bayern AG, which includes the professional footballers. Long-standing partners Adidas, Allianz and Audi each hold 8.33 percent.

In addition, Hoeneß spoke again about the situation of the star striker Robert Lewandowski who was willing to change and agreed with the attitude of the board. He has “joined the position of FC Bayern: that is, to exercise the right to have the contract fulfilled if no alternative is found.” And: “I assume that Robert will accept it in the end.”