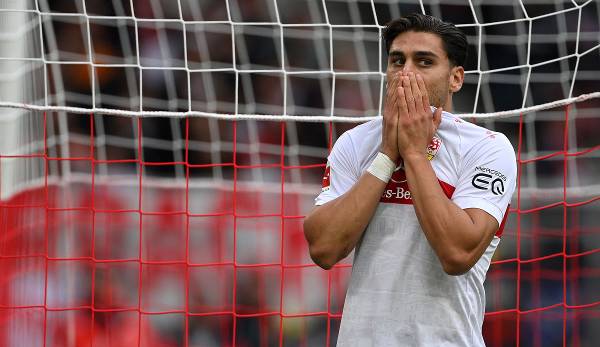 Everything should get better at VfB Stuttgart – but in fact things are just as choppy as last season. The sporting descent has endured, but at least there are some positive signals off the field. Even if not everyone recognizes them as such.

After a difficult last season, VfB Stuttgart is stuck in the bottom of the table again after seven games. Hardly anything is left of the desired spirit of optimism, instead Pellegrino Matarazzo has to deal with some old and new problems – which the coach apparently does not get a handle on.

If one construction site seems to be closed, two new ones open up immediately. And that will be the next endurance test for the club in the long run. An inventory.

VfB can’t get away from a start to the season that has to be classified as a failure. Five points after seven games rightly mean 16th place. Not a single win so far is a new negative club record, that has never happened in VfB’s long history in the Bundesliga – and also in the 2nd division.

The team fell behind again against Frankfurt, for the fifth time this season. And again it was the early timing of a goal that threw the actual game plan overboard and, as in this case, completely played into the hands of an opponent who was not physically and mentally fresh. Pellegrino Matarazzo had long resisted the fact that his team had trouble concentrating in the first fifteen minutes of a game.

At the latest with the fourth goal conceded within the first 15 minutes – each time to 0:1 for the opponent – the coach should give it serious thought. And also about the fact that VfB was able to win three of 24 Bundesliga games in the 2022 calendar year.

The feats of strength against Gladbach, Augsburg (each 3-2 behind) and the emotional 2-1 against 1. FC Köln with the last-minute rescue are the only outliers in an otherwise dreary series of failures or at most partial successes. VfB no longer knows the feeling of an at least halfway sovereign victory. The last one dates from December 2021, a 2-0 win at VfL Wolfsburg – also the last away win for Stuttgart in the league.

It certainly wasn’t all bad in the first few weeks of the season, quite the opposite. VfB always has phases in its games in which it convinces. That was the case against the big clubs like RB Leipzig or FC Bayern and against the supposedly smaller ones like Bremen or Cologne. The game against Werder is still lagging behind VfB to this day, the two points lost at the time and the feeling of being able to save and win an (away) game over time is something the team totally misses.

Stuttgart had everything under control in Bremen as in Cologne – and there even in a long minority – in the game against the ball, hardly allowed goalscoring chances and could rely on a strong Florian Müller, who also fished out a so-called unstoppable one . Who held on to one point against Leipzig, in Cologne, in Munich and in his second season can become the support that everyone is hoping for, only to be doubly unhappy against Frankfurt with the first two goals conceded.

It remains a great mystery as to why individual players cannot permanently confirm their good approaches. Müller is just one example, Dinos Mavropanos, Chris Führich, Silas, Tiago Tomas and Naouirou Ahamada are others. Whereby the latter, due to their youthful age, should most likely still be allowed to fluctuate in performance.

But that’s how VfB sometimes lurches through its games. Very good or at least reasonable phases alternate with inexplicable performance holes, which are then usually immediately and mercilessly punished by the opponent or – this is also a factor – has already led to two dismissals, which had a major impact on the respective games . If the team manages to take the lead first, this exhilaration doesn’t last for three minutes.

Some lack of control in a duel, already 19 yellow cards and two dismissals are one thing, but the individual mistakes of the players in all phases of the game are actually even more serious. Goals conceded like against Freiburg, when a harmless cross ball just slipped through three Stuttgart players, careless mistakes before the goal against Schalke in the deep build-up or now the lack of communication before the free kick, which resulted in the 0:1 against Frankfurt or the stick error, which led to the free kick which led 0:2 can hardly be explained.

Stuttgart started the season with just three central defenders, which was a risk in itself and relied on all three central defenders being reliable. So far, however, this has not been the case. It is good and necessary that improvements have already been made here: With the ex-Dortmunder Dan-Axel Zagadou, an alternative was signed on Monday.

The group tactical processes are in place and the team as a whole is more stable against the ball than in the past season. And yet VfB can’t keep the zero. The Cologne game is the exception, otherwise it rattles in every game.

In the meantime, 25 home games in a row have accumulated in which Stuttgart have conceded at least one goal. That is already a negative club record and only one more home game is missing to break the age-old record set by Rot-Weiss Essen from 1970 to 1974.

What leads to goals being conceded on the defensive destroys goal chances that have been played out cleanly in front of the opposing goal. The closer VfB gets to the goal, the more complicated it gets. Or he forgets to score goals when everything worked as desired until the end. Only about every fifth major chance is also converted into a hit, the last opponent Frankfurt or leaders Union, on the other hand, are around 40 percent chance conversion.

At the latest, that is also a question of the quality of the squad. The team is still dragging along too many players who can set individual highlights but cannot consistently and reliably call up their potential.

VfB Stuttgart: The restlessness of the last few days

Last week’s general meeting would hardly have been worth mentioning if VfB hadn’t surprised me with three personal details and thus, at least negligently, caused even more discontent among the fans. Philipp Lahm and Sami Khedira will soon support the sporting management with their expertise, Christian Gentner will help as “Head of Licensed Players Department”. A large part of the supporters went on the barricades in the hours and days afterwards on social media, the club’s once again too cozy communication and above all the fact that sports director Sven Mislintat felt ignored because of the uncoordinated decisions wave of indignation.

VfB boss Alexander Wehrle tried to recapture the completely failed communication with a discussion and a public communication a few days later, but the tone among most fans had long been set. The way of communication will reverberate for a long time and is already overshadowing the very reasonable decisions.

With regard to the lack of sporting skills at management level, VfB is a burned child, with Lahm and Khedira now not only getting two world champions, but also outspoken experts and absolutely professional personalities who also have immense experience and a large network, should be a strong signal in terms of constructive debates about the sporting orientation of the club.

And despite the difficult phase with Gentner at the end with two relegations, he remains a good person to fill a position as a type and possible link between sporting management and the team, in which the club obviously feels underserved.