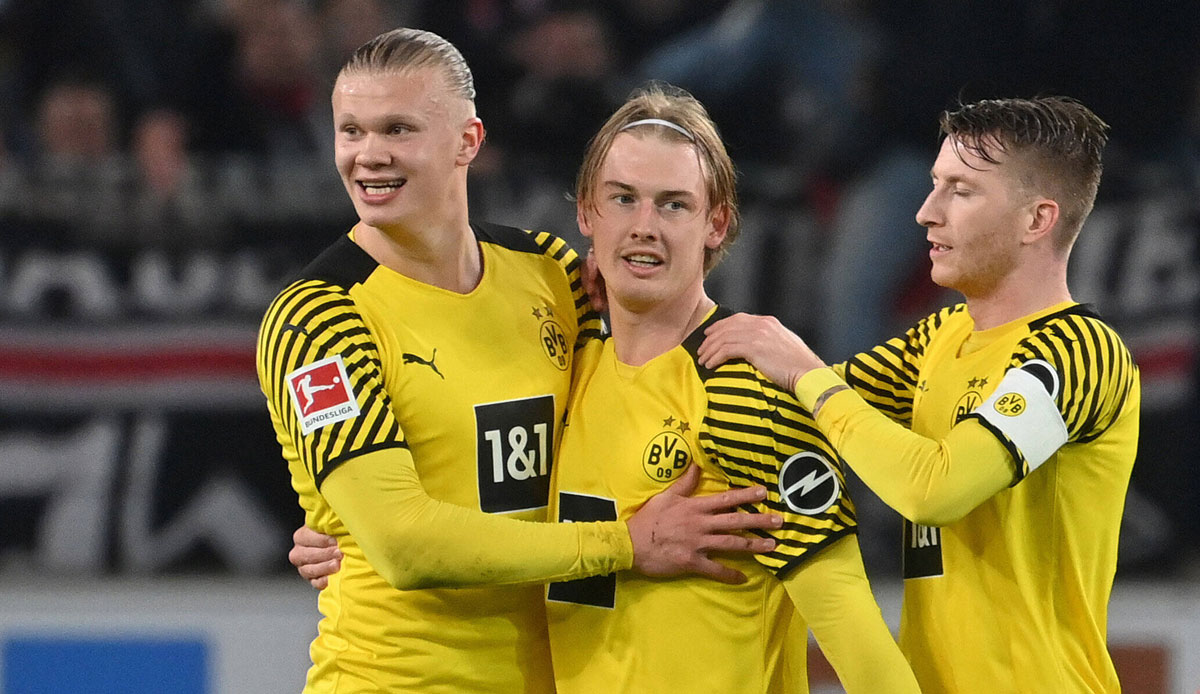 At the start of the 29th matchday, Borussia Dortmund kept the minimal chance of winning the title with a 2-0 (1-0) win at VfB Stuttgart and made the qualification for the Champions League almost perfect.

In front of 58,248 spectators in the sold-out Mercedes-Benz Arena, Julian Brandt scored twice (12th, 71st) to win for BVB, who at least partially showed the desired reaction a few days after the 4-1 swatter against RB Leipzig. After the 14th defeat of the season, VfB is in danger of slipping back into the relegation zone.

Brandt’s 1-0 did not initially count because Erling Haaland, who provided the assist, was supposed to be offside, but was ultimately given after intervention by VAR. “Jude plays a deep ball to Erl. He was a bit unsure whether he was offside. I just run along if I suspect it,” explained Brandt. “We all knew it was a tricky scene. I was a bit surprised myself that the goal counted. I don’t know exactly what was checked. In the end, I didn’t care.”

However, BVB bought the victory at a high price: Gio Reyna, Mahmoud Dahoud and Mats Hummels had to be replaced injured or injured before or during the break.

Both teams in the usual basic formations, VfB in 4-3-3 with Tomas in the lead, Dortmund relied on “his” 4-2-3-1 – but had to digest a first shock after about 20 seconds and replace Reyna and also switch to 4-3-3. Which turned out to be a pretty neat idea.

Stuttgart expected the opponent a little deeper than usual, let Dortmund have the ball and wanted to switch quickly. But Stuttgart didn’t put much pressure on the ball because BVB put their formation very wide on the offensive and thus repeatedly created space in the half-space.

However, the early Dortmund lead fell after a moment of Dortmund switching. The guests initially remained dominant, but then, as in the last few games, had some problems after losing the ball and closing. Otherwise the game remains at a manageable level, with many small technical errors on both sides.

Stuttgart ran significantly higher in the second half and had some quick ball wins. When switching, however, there was usually a lack of precision. Dortmund only worked sporadically on the offensive, managing the game – which, however, was no longer possible, especially in the final phase, when Stuttgart had several good chances and BVB was just lucky.

The data of the game VfB Stuttgart vs. Borussia Dortmund

The star of the game: Julian Brandt (Borussia Dortmund)

The flop of the match: Dinos Mavropanos (VfB Stuttgart)

In the absence of the suspended Anton, not the hoped-for organizer and calming influence in the center of defence. On the contrary: reckless error before 0: 1, plus a number of weak diagonal balls. He is also welcome to head the ball on target from a few meters (81′).

Confident performance, had no major problems with the fair game. Good at duel evaluation and advantage interpretation. Was also right about Guerreiro’s accidental handball when he didn’t decide on a penalty.