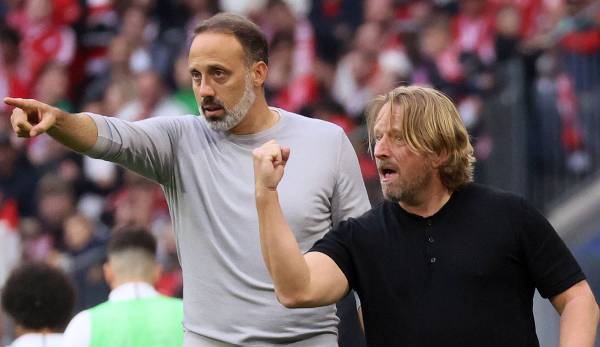 After a dramatic 34th match day, VfB Stuttgart jumped off the shovel at the very last moment. To be able to stay up in the league after such a hell of a season could be a turning point for the Swabians in the Bundesliga. A comment from SPOX editor Tim Ursinus.

The season finale could not have been more nerve-wracking. First Youssoufa Moukoko put BVB ahead in the 84th minute against Stuttgart’s direct competitor Hertha BSC, only a few minutes later VfB scored the winning goal against 1. FC Köln in injury time. After the final whistle, all dams broke – also in the stands.

“It’s good. I have a skull after this screaming and cheering. It was ecstasy, a great moment was outstanding. I’m so looking forward to the boys. You never forget a moment like today,” said coach Pellegrino Matarazzo after the second :1 success.

It was also Matarazzo who emphasized at the beginning of the year: “If we can look back, then see the giant board and still celebrate that we made it, then that will give us strength and strength and a bond that will last a lifetime will last long.”

And with that, the 44-year-old may have found almost prophetic words. Keeping the class under the difficult circumstances throughout the season can only make VfB optimistic for the future: the prerequisites for moving away from an elevator team in the coming year – there was a risk of the third relegation in six years – to one established Bundesliga teams are excellent.

The season that has just ended after the strong promotion season 2020/21, in which Stuttgart even played for Europe, was under a bad star for a long time. Right from the start, VfB had to deal with countless corona cases and injuries.

However, those responsible around sports director Sven Mislintat never let themselves be disturbed, even when the necessary results failed to materialize, and despite 16th place they only brought in one player with Thiago Tomas in winter. The chosen path of mainly relying on young players was followed with determination with the transfer of the 19-year-old: The Swabians appear three times in the top 5 of the youngest starting formations and lead the rankings with an average age of 23.5. There were also no trainer discussions, and spokesmen were not publicly pilloried.

There were enough reasons for a change of direction. From December to March, for example, VfB did not win nine games in a row, after the 2-0 defeat against Hertha BSC in April, they were already declared a safe candidate, at least for relegation. Even the departure of sports director Thomas Hitzlsperger did not lead to a rethinking of their own principles. And a renewed descent was nevertheless – or precisely because of this – prevented.

Going into the second division would undoubtedly have meant the worst case scenario for VfB and would have thrown the club back far in its development. Many top performers would have had to be replaced, and the financial situation would have deteriorated again after the corona pandemic, which is still wreaking havoc on VfB.

But VfB have laid a good foundation for the years to come – and with Wataru Endo’s dramatic winning goal, experienced a moment that will bring players and fans together. The team and Matarazzo have matured, the financial opportunities through staying up and the stadiums, which are expected to be full again, will relax in the coming season.

A look at the capital shows that things can be completely different. Fredi Bobic changed coaches there twice, the squad is also riddled with expensive commitments, eight players are 30 or older. And after firefighter Felix Magath, a new coach is needed.

Even if the league were to succeed via relegation, the old lady would have to start again from scratch. VfB is quite a step further.