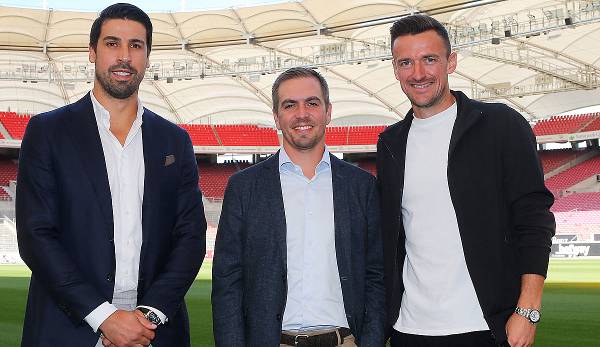 Philipp Lahm and Sami Khedira should bring their knowledge to VfB Stuttgart – the board says it has nothing to do with Sven Mislintat’s job. However, there are nuances.

At some point, Sami Khedira looked at Philipp Lahm and said: “I think the last time we saw each other was with the golden trophy.” A whiff of Rio 2014 wafted through the room at that moment, and that was definitely what VfB Stuttgart wanted.

“We have world champions, Champions League winners and German champions sitting here,” Alexander Wehrle said with a proud grin when he moderated his club’s latest coup. Lahm, the German captain at the 2014 World Cup triumph, and his former DFB colleague Khedira will advise Wehrle in the future. Former VfB captain Christian Gentner will also become head of the licensed players department from January 1st. The trio was introduced on Monday.

The arrival of these three greats in the club’s history had recently sparked some speculation, especially with regard to Sven Mislintat. The head of sports, who only has a contract until 2023 anyway, could gradually lose influence and then soon lose his job.

Wehrle also commented on this with a grin. He recently read “a lot of interpretations and speculations,” he said, and advised the journalists present: “Relax a bit.” However, what he said sounded like an open-ended situation.

“In Sven, the club has someone who has outstanding expertise. He’s a professional, so I’m sure he’ll be happy if other perspectives come into play in the future.” With a view to his contract extension, he “does not want to be put under pressure” from outside, Wehrle said.

“If there’s a really good decision in the interests of VfB, then we’ll announce it. We’ve both known each other for a while, we’ll have intensive talks, which I’m looking forward to. Neither of us are pleasant conversation partners when it comes to contracts.” Undoubtedly there are “a few things to discuss in the process that VfB is facing”.

Wehrle completely avoided the specific question of how far Mislintat was involved in the talks about signing Lahm, Khedira and Gentner. Obviously, Mislintat, who incidentally followed the PC in the press room, was not involved. That makes things quite explosive.

Khedira and the “eagle view from above”

However, President Claus Vogt made it clear that the club had “a functioning sporting team” and “we don’t want to disturb that. We don’t want to improve it, we want to expand it”. Lahm and Khedira should only advise the board.

The prominent duo also valued this. “We are there to give an opinion with the eagle view from above and without the stress of everyday life,” said Khedira.

And Lahm believes that you won’t hear that much about him from the outside. “It’s not my job to speak in public,” he said, “we do it internally. And we don’t make any decisions. VfB have to see what they make of it.”