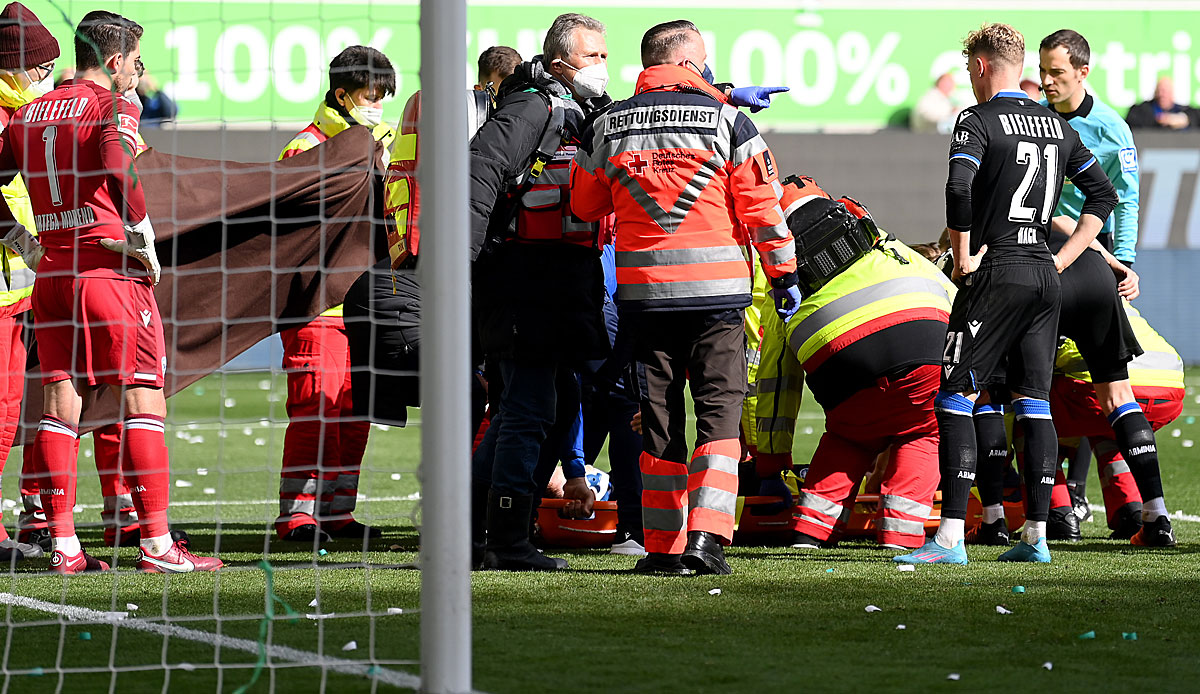 With a 4-0 win over Arminia Bielefeld, VfL Wolfsburg gained some air in the relegation battle. The guests experienced another shock: Cedric Brunner suffered a head injury.

As the Arminia Bielefeld players crept up to their fans with their heads hanging, the shock of Cedric Brunner’s early knockout was still in their bones. The followers who traveled with her gave her a frosty reception and gave free rein to their displeasure. Goalkeeper Stefan Ortega was the first to dare to go to the fence and start a conversation.

The 0: 4 (0: 2) of the relegation candidate at VfL Wolfsburg was overshadowed by Brunner’s head injury. The Swiss defender collided with Jonas Wind in a header duel in the 27th minute and fell unhappily to the ground. Fixed by belts, the 29-year-old had to be carried off the field on a stretcher five minutes later and taken to a Wolfsburg hospital.

“We know that he is conscious again and that he can speak again,” said trainer Frank Kramer on Sky: “First of all, his health is the priority.” It was like deja vu: a week ago, striker Fabian Klos suffered a serious head injury that required surgery.

In the evening, the East Westphalians cautiously gave the all-clear on Twitter. “Initial investigations did not reveal any serious head injuries. However, due to the short-term loss of consciousness, he remains in the hospital for monitoring,” said Armina. “All the best,” Wolfsburg’s Ridle Baku wished the Swiss: “I hope he gets back on his feet quickly.”

While Bielefeld is still deep in the relegation battle after the fifth away bankruptcy in a row, the Wolfsburg can breathe a sigh of relief: With the overwhelming victory after three defeats, they got some breathing space.

In the eleventh minute, Lukas Nmecha beat Bielefeld’s goalkeeper Stefan Ortega from close range. The VfL striker was successful again with a header in the 38th minute. Midfielder Maximilian Arnold made it 3-0 with a free kick in the 48th minute, five minutes later ex-national player Max Kruse headed in in front of 22,512 spectators.

Coach Frank Kramer’s team from Bielefeld started the encounter with a good move. After a combination worth seeing, Robin Hack appeared free in front of VfL goalkeeper Koen Casteels after less than 120 seconds, but failed because of the fast-reacting Belgian. But after that, the hosts, who were again looked after by coach Florian Kohfeldt after the forced Corona break, largely took over command of the pitch.

At the latest after the fourth Wolfsburg goal, the now one-sided game was decided. In order to keep the defeat within bounds and save energy for the difficult weeks ahead, Arminia coach Kramer exhausted his entire quota of substitutions after just 56 minutes.

The encounter only rippled away in the last half hour. And Kohfeldt also used the clear lead to give players from the second row of his squad a few more minutes.