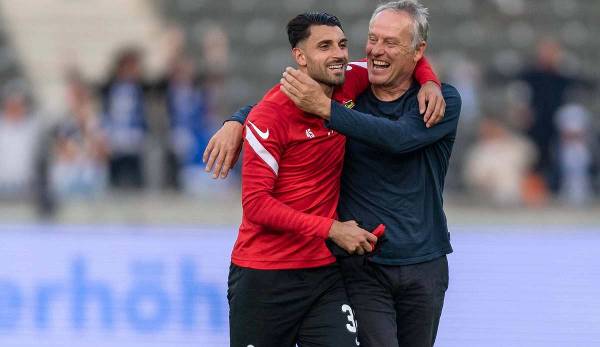 Italy is trembling for the World Cup ticket, the European champions are threatening to miss a World Cup for the second time in a row – and Vincenzo Grifo is watching TV. In an interview with SPOX and GOAL the SC Freiburg attacking player talks about the Squadra Azzurra, his special relationship with Christian Streich and his personal future.

The blue jersey with the legendary number 10 worn by Vincenzo Grifo on his debut for the Italian national team has been given pride of place. It hangs in his living room, like the SC Freiburg attacking player in conversation with SPOX and GOAL betrayed.

The 28-year-old made six appearances for the Squadra Azzurra, but despite his current high with the Breisgauers, national coach Roberto Manchini gave up his services for the upcoming World Cup playoffs against North Macedonia (8:45 p.m. live on DAZN and in LIVETICKER).

Nevertheless, Grifo Italy is keeping its fingers crossed. In conversation with SPOX and GOAL he also talks about the current run of SC Freiburg, reports on a special experience with head coach Christian Streich and explains his plans for the future.

… about Christian Streich: “He’s a very emotional person with a big heart who can deal with both young people and those over 30. He’s a fanatic, in a positive way of course. He talks to everyone about football.”

… about Streich’s long time at the sports club: “It’s not easy staying in the Bundesliga for ten years like he did. He always has the will to work and get better. Sometimes he loses his best players but he always has the strength to find a new one to build a good team.”

… about whether he could imagine Freiburg without a prank: “It’s very difficult for me to imagine him in another team. I remember ten years ago when I watched football on TV. He was here then. How can you imagine Streich outside of Freiburg? It’s difficult to even think about.”

… about a special experience with a prank: “I remember a game against Greuther Fürth in the 2nd Bundesliga, we won 5-2 and I scored two goals and gave two assists. I was the happiest person in the world but he yelled at me in front of the whole team , because we conceded a goal after I lost the ball. He was very angry. He made me understand what the quest for perfection is. Many would have complimented me, but he made me realize my mistakes.”

… about his future: “I feel like I’m part of a second family here. My parents live in Pforzheim, which is an hour away. If there’s an opportunity to take the next step, I’ll think about it. It’s part of football. But Freiburg gave me the chance to come back and develop well. There were already inquiries in January. If there are offers, you think about it. But the right time has yet to come. Now I want to take the chance, with Freiburg in one playing international competition, then we’ll see what happens.”

… about the Freiburg season: “We’re very tight as a team, this year the squad has more quality too. We have seven games left – hopefully nine if you consider the cup semi-finals and hopefully the final – and we’re having a fantastic season. We’ll see in the final games whether we will fight for a place in the Champions League At the beginning of the season, our goal was to repeat last season’s placement (Tenth place, editor’s note) to improve. We had a good run and we understood that we can take the next step. We also needed a bit of luck, but we have a lot of confidence. And with confidence you can still win some games.”

… about Nico Schlotterbeck: “He’s a very good player, with a lot of quality, a great defender and I’m sure he’ll go far. He deserves the call-up to the national team. It’s not easy, but he has the right attitude.”

… about the game against Bayern after the international break: “They have incredible individual quality, I don’t need to explain more. We’ll have our chances but we have to take them. Bochum also managed to beat them 4-2 at home. We’ll need patience because they’ll have more possession to have.”

… about Julian Nagelsmann: “He was with me in Hoffenheim when I played my debut season in the Bundesliga in 2012/13. He was only the third assistant coach, but he was already leading the training sessions and also speaking to the team. I also went back to Hoffenheim in 2018 to work with Nagelsmann, but then I decided to return to Freiburg because of my shorter playing time.”

… about the Italian national team: “I love the Italian national team and have always worked hard to get to the Azzurri. I will always be grateful to Roberto Mancini for giving me the chance to make my debut. I want to be successful with the national team. Last May if I was on the list for EURO 2020, then of course I was sad when I was not considered and had to return home, but after two days I was sitting in front of the TV with my jersey, like a real fan. I am in contact with my team-mates, it was like a big family. Italy means a lot to me, also because there are players there I can learn a lot from.”

… about the World Cup playoffs: “I wish my team-mates and the coach the best of luck. I’ll be watching TV and cheering for them. I’m confident we can do it. We have a great team who know how to deal with pressure situations because we have very strong players .”

…on the possibility of playing for Germany: “Some times I’ve been asked if I want to play for Germany, but I’ve always said to myself that if I had a choice between Germany and Italy, I would choose Italy. Here in Germany I have everything and I don’t miss anything but mine Heart beats 100 percent for Italy. At home, Italian is spoken and eaten.”