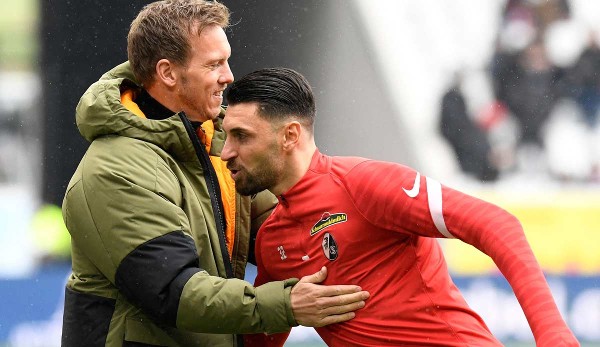 Freiburg’s offensive player Vincenzo Grifo spoke about his ex-coach Julian Nagelsmann. Before the Bundesliga starts again, Bayern are hoping for the return of two key players. And: Timo Werner reported back to Munich’s opponent RB Leipzig with a sense of achievement. News and rumors about FC Bayern.

The news about FC Bayern in the past few days:

Vincenzo Grifo from SC Freiburg has a clear favorite when comparing his coach Christian Streich with his former coach Julian Nagelsmann.

“I wouldn’t trade Christian Streich for anyone, not even Nagelsmann. I play for SC Freiburg and Christian is just a part of it. I’m very happy to be able to play under him and I’m happy to be even better. That Julian will understand too, I’m sure of that,” said Grifo in an interview with the picture on sunday.

Grifo has thrived at SC Freiburg since his return from Hoffenheim in 2019, having previously been a reserve player with the Kraichgauers under Nagelsmann. “Both are outstanding coaches, that’s for sure. Unfortunately, I didn’t play much in Hoffenheim, but that wasn’t because Julian and I didn’t get along. It just fits better in Freiburg under Christian,” explained the 29-year-old.

Streich is one of the “greatest” in football for him. “Why are Ronaldo and Messi the best players? Because they never sit back, always want to be better. That also applies to Christian Streich as a coach,” emphasized the Italian international. “He always goes one step further – no matter how good you already were.”

Record national player Lothar Matthäus has clearly spoken out against Thomas Müller in the position of the real nine. “That doesn’t do Thomas any favors, he’s in the wrong place at the front,” said Matthäus table football and demanded: “Let him play where he has his strengths. Thomas belongs behind the top, like he used to play with Robert Lewandowski.”

However, the competition in this position is currently very high in the person of Jamal Musiala. Matthäus currently considers the youngster to be “Germany’s only world-class player”. Still, Müller shouldn’t be written off, “We’re not that far yet,” added Matthäus.

National player Timo Werner has reported back to Bayern Munich’s upcoming opponent RB Leipzig with a sense of achievement. In the 4-0 win in the friendly against the Czech first division club Mlada Boleslav, Werner scored the final score 73 days after his syndesmosis ruptured.

RB coach Marco Rose was happy about the comeback of his offensive star – especially with regard to Christopher Nkunku, who is still missing. “You can immediately see Timo’s quality and his pace, which we don’t have in the constellation up front without Christopher,” said Rose. “So it’s very important that Timo is back, that he lasted 50 minutes and scored a goal.”

But you also noticed “that he still has to get a few grains through games,” added Rose. “He will get the games because we have a lot.”

In general, the RB coach did not want to overestimate the clear win against Boleslav before the top game on Friday against leaders Bayern Munich (8:30 p.m. in the live ticker). “Of course it had little to do with FC Bayern,” explained the 44-year-old. First and foremost, he was “grateful that we had a good opponent”.

Coach Julian Nagelsmann has released his team for the weekend after the wild 4:4 in the friendly against Red Bull Salzburg on Friday. “Now we’re going to catch our breath for two days and then we’ll start preparing on Monday. We’re in good spirits,” said Thomas Müller after the draw against the Austrian series champion.

On Friday, Munich hope for the return of the two key players Eric Maxim Choupo-Moting and Matthijs de Ligt. Attacker Choupo-Moting was out on Friday due to a gastrointestinal infection. The Cameroonian should be fit again by the time the Bundesliga restarts against Leipzig.

At de Ligt, who suffered an ankle injury in the training camp, sports director Hasan Salihamidzic was already confident on Friday: “Nothing is broken, he only paused for two days. What I can say 100 percent is that he will next week against Leipzig,” said Salihamidzic Munich Evening News.