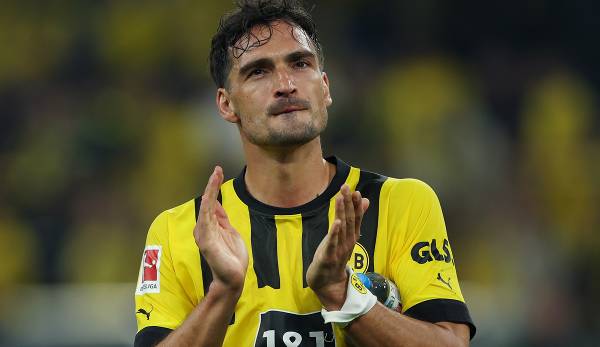 Mats Hummels has made a good start to the season for BVB, and those in charge at Borussia Dortmund are also aware of this. Before the Champions League opener against Copenhagen, the black and yellow are plagued by personnel worries. Here you can find news and rumors about BVB.

In the summer, BVB strengthened central defense with Nico Schlotterbeck and Niklas Süle, it was also a pointer to Mats Hummels, who after a mixed few years was no longer undisputed in the black and yellow. And yet, the veteran has been in the starting eleven in all games so far and has shown quite appealing performances.

Coach Edin Terzic has spoken to him about this table football a simple explanation: “That was the longest summer break he’s ever had in his career.” According to Terzic, the 33-year-old made excellent use of it. Hummels’ goal was to “bring himself to the best level of fitness he can be”. Hummels “got it great”

Things are different with Niklas Süle, one of Hummels’ competitors. Sporting director Sebastian Kehl recently called for the national player to get fitter. Like Süle’s advisor to Volker Struth picture TV revealed, Süle’s weight was already an issue when Borussia started contract negotiations with the central defender.

But the agent also defended his client: “At the end of the day, it’s important that the player performs. He’s only been in Dortmund for a few weeks. Now give it some time! I’m sure that Niklas Süle will have a good season at Borussia Dortmund and also a good World Cup,” Struth is certain.

Hummels would also like to play for the DFB team again, as Terzic confirmed. And Kehl also agreed: “I have the feeling that Mats in particular wants to show everyone again how good and important he can still be. He probably didn’t always live up to his own expectations last season either.”

Salih Özcan made a strong debut in Berlin and the new signing from 1. FC Köln also did well against Hoffenheim. In an interview with the Ruhr news the Turk now revealed why he chose BVB and also spoke of an “easy decision”.

“I wanted a change and to test my limits with a larger club, to broaden my horizons. The clubs and their fans tick in a similar way, only BVB is even bigger as a club, with huge ambitions,” Özcan explained his step and revealed that he was his Adviser instructed that BVB would be his top priority. “The talks went well. Then everything quickly became clear.”

Özcan said it was “an honor” when Dortmund actually made an offer. In a conversation with sports director Kehl, it was also made clear to the midfielder what BVB expected from Özcan. “Among other things, he made it clear to me that BVB is looking for players who stand their ground even in difficult times, who give their all in training and in games.”

The 24-year-old moved to Dortmund in the summer for around five million euros. The Cologne native had previously played 128 competitive games. In 2017, Özcan received the Fritz Walter Gold Medal for the best U19 player in Germany.

After a good month into the season, BVB are already plagued by numerous personnel worries. There are problems, especially on the wing positions, before the Champions League opener against FC Copenhagen. Donyell Malen gets loud table football are still missing due to muscular problems and youngster Jamie Bynoe-Gittens is also questionable.

The Englishman dislocated his shoulder in an aerial duel in the game against Hoffenheim (1-0), and the black and yellow will examine the 18-year-old more closely in the coming days. Mahmoud Dahoud suffered a similar injury last week and the midfielder is not expected to return until November.

In addition, Karim Adeyemi is still suffering from an injury to his big toe, but there is still hope in the BVB camp that he will be able to play against the Danes. Another alternative for the wing positions could be Raphael Guerreiro, the Portuguese will most likely be available again against Copenhagen.

BVB: Fear opponents Hannover 96 is waiting in the cup

In round one, Borussia did not show any weaknesses at third division leaders 1860 Munich (3: 0), now it is again against a lower-class team. The draw on Sunday evening resulted in a guest appearance at second division side Hannover 96.

There you are quite self-confident. “We’re looking forward to the challenge and are happy to accept it. With last year’s cup experience in mind and a full stadium behind us, we’ll sell ourselves as expensively as possible,” announced sporting director Marcus Mann.

Did he know about the record against BVB? The two teams met five times in the cup, four times the Reds prevailed. BVB only won in 2012/13, when Mario Götze (3), Jakub Blaszczykowski and Robert Lewandowski scored the goals for the black and yellow in a 5-1 win.