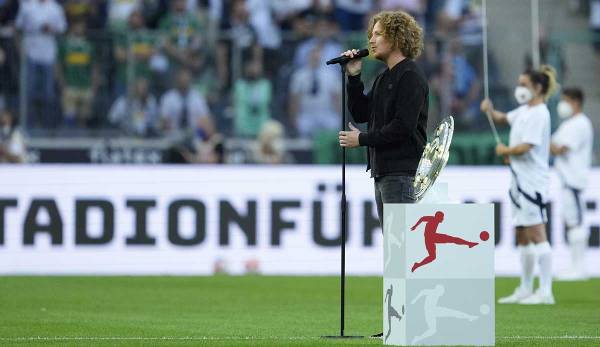 The national anthem is sung before the kick-off at the Bundesliga opener between Eintracht Frankfurt and FC Bayern Munich in Deutsche Bank Park. By whom? And who sang the German anthem so far? Here you get the answer.

The 60th Bundesliga season starts this Friday, August 5th, with a cracker between Eintracht Frankfurt and FC Bayern Munich, so the Europa League winner has to deal with the reigning champions, who are also record champions . Kick-off at Deutsche Bank Park in Frankfurt is at 8:30 p.m.

But before the ball finally rolls for the first time in the 2022/23 season, the national anthem will be sung – a tradition that has existed since the summer fairytale at the 2006 World Cup. The USA may have served as an inspiration, where the anthem is always sung before important sporting events such as an NBA Finals game.

In Germany, as in the United States, someone else sings the national anthem from event to event, in the case of the Bundesliga from year to year. This season the honor goes to singer Carolin Niemczyk. Niemczyk is one half of the electro-pop duo Glasperlenspiel, best known for the song “Geiles Leben”.

In addition to the spectacle at the opening between Eintracht Frankfurt and FC Bayern, the first matchday this weekend has a few more highlights to offer. Tomorrow the two capital clubs Union Berlin and Hertha BSC will face each other in the first derby of the season.

Borussia Dortmund against Bayer Leverkusen also promises to be a spectacle, the two Champions League clubs will meet tomorrow in the evening game. Newly promoted FC Schalke 04 also returns to Bundesliga matches on Sunday with a duel against 1. FC Köln.