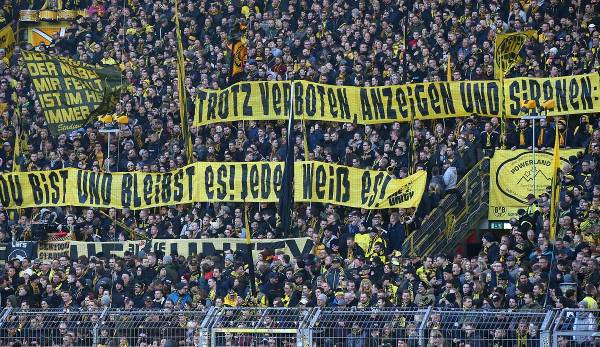 Dietmar Hopp has been an enemy for many BVB fans in recent years. The conflict between the patron of TSG Hoffenheim and the supporters of Borussia Dortmund escalated with abuse and criminal charges and culminated in the scandalous game in Sinsheim at the end of February 2020. But where does the hatred of Hopp come from?

Borussia Dortmund vs. TSG Hoffenheim – 8.30 p.m. in the LIVETICKER

Why is Dietmar Hopp an enemy for many BVB fans?

Dietmar Hopp grew up in Hoffenheim and is a co-founder of the IT company SAP. The billionaire is said to be worth $4.6 billion (forbes) as one of the richest Germans. As a patron, the 82-year-old has been supporting TSG Hoffenheim for years, for which he played football himself as a youth.

Hopp made several hundred million euros available to the club. Thanks in part to financial support, the village club made it into the Bundesliga in 2008. For many fans, not only for Dortmund, Hopp is a prime example of the commercialization in football, which is hated especially in the active fan scene.

Hopp has not only subsidized TSG Hoffenheim in recent years, but also used far more money (over 800 million euros) for charitable purposes. “When you become as rich as I have, you simply have an obligation to give something back to society,” Hopp once said.

For many BVB fans, TSG Hoffenheim is a test-tube club that would never have made it into professional football without Hopp’s financial injections. At the U17 final between the two youth teams in 2008, a banner with Hopp’s likeness in the cross hairs appeared in the guest block for the first time. “Hop, hop – back to the test tube,” was written next to it.

During the first Bundesliga game between TSG Hoffenheim and Borussia Dortmund in the 2008/09 season, a banner with Hopp’s likeness in the cross hairs was again shown in the away block. Hopp defended himself and filed a complaint for insult against a then 19-year-old who was identified as the author of the abusive poster.

In 2011, during a Dortmund away game in Sinsheim, there was a “sonic attack” on the BVB attachment. According to TSG, a caretaker tried to drown out the chants of abuse against Dietmar Hopp by the visiting fans with a self-made sound cannon. Eleven BVB fans filed a complaint. Hopp apologized, but also said that the fans shouldn’t behave like that in view of the insults against him.

The insults continued in the years that followed. On the contrary. The conflict continued to escalate. In the games between Dortmund and Hoffenheim, Hopp was regularly denigrated as a “son of a bitch” in chants. In 2018, TSG spoke of “undisguised hatred and agitation up to and including a call for murder” after another crosshair banner was shown against Hopp in the Dortmund block.

How did those responsible react at the time?

BVB Managing Director Hans-Joachim Watzke publicly condemned the escalation in September 2018: “I would like to apologize on behalf of Borussia Dortmund Dietmar Hopp. That is unacceptable.” At the time, the club wrote of “unacceptable behavior in the black and yellow fan block”.

At a shareholders’ meeting in 2009, Watzke launched a verbal sweeping attack and particularly railed against Hoffenheim and Wolfsburg. “What’s the name of this THG – or TSG? Where would they be without the white knight from Hoffenheim? We just can’t say: Dear Dietmar Hopp, let it rain money,” Watzke rumbled in his criticism of the distribution of TV money. “It’s unacceptable that Wolfsburg and Hoffenheim, who only came to the Bundesliga in 1998 because of a birth defect and anyway have the most money, then also participate.”

Why did the Hopp conflict escalate in early 2020?

Over the years, the insults against Hopp in the Dortmund fan scene have been viewed more and more as a kind of folklore. In November 2018, the DFB issued a suspended sentence against the Dortmund fans because of the abuse. But when Hopp was again insulted during an away game in December 2019, the DFB received the suspended sentence and ordered a two-year ban on visiting fans at Dortmund away games in Sinsheim.

In the eyes of the fans, this collective punishment was a violation of previous assurances by the DFB that it would refrain from taking such measures. Many ultra groups then showed solidarity with the people of Dortmund.

At the end of February 2020, there were massive protests against Hopp and the DFB in many stadiums in the Bundesliga. The game between TSG Hoffenheim and FC Bayern on February 29, 2020 was about to be canceled after Bayern fans unrolled a “son of a bitch” banner against Hopp. After a one-minute break, both teams just passed the ball to each other. Bayern boss Karl-Heinz Rummenigge, who showed solidarity with Hopp on the lawn and gave applause, then spoke of a “black day”.

Dietmar Hopp vs. Fans: What is the current state of affairs?

The sanctions against Dortmund fans were already lifted during the corona pandemic. After the game was resumed, many games were played without an audience anyway. In early 2022, Dietmar Hopp dropped three criminal charges against Borussia Dortmund fans, further cooling the conflict.

“In the meantime, this topic has eased for several reasons,” said Alexander Salzweger, spokesman for Club No. 12, the association of active Bayern fans, in an interview with SPOX and GOAL in May of this year. “Many stadium bans have expired, Hopp has withdrawn a large number of ads – especially against Dortmund fans – and the big one ZDF-Documentation also played its part.”

The documentary, published a year after the Sinsheim scandal, had processed the events and also revealed that the great wave of outrage was not so spontaneous, but that those involved knew in advance about the actions of the fans.

“After the documentary, even Hoffenheim fans and Hopp’s people in the club admitted that the procedure was stupid and the ads were made up out of thin air,” says Salzweger. “I think Hopp has understood that by now. As long as he doesn’t let it hail ads again, the issue won’t escalate anymore.”