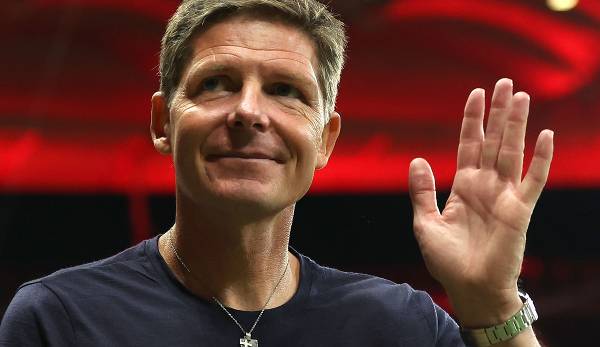 Eintracht Frankfurt makes a veritable change of course at breakneck speed and is successful with it. The focus is on Oliver Glasner, who once again impressively demonstrates his outstanding skills as a football coach.

In Munich, Leipzig, Dortmund, Leverkusen, Gladbach, Frankfurt and eventually also in Wolfsburg, new coaches were sought last summer. In the great trainer castling, Oliver Glasner was one of the last dominoes to fall – and for some experts also the trainer that was found to be the easiest to exchange rings at the time.

The chain reaction that Marco Rose set in motion with his departure from Mönchengladbach was particularly piquant. He was followed by Adi Hütter in Gladbach, who in turn made room in Frankfurt. Glasner had just moved into the premier class with VfL Wolfsburg, and it was no exaggeration to describe the Austrian’s second season as a complete success.

But because there was a crunch in Wolfsburg’s internal relationship with sports director Jörg Schmadtke, Glasner decided to move to Frankfurt – and ended up in the top places on the list of the first coaches to be kicked out by some bookmakers. The rest is history. And while the coaches in Dortmund, Gladbach and Wolfsburg are long gone, Glasner in Frankfurt just keeps doing what he does best: he keeps making his team and individual players better.

Oliver Glasner: With the best in the league

That was already the case at LASK, where Glasner was the strong person in the club almost as the sole decision-maker. And in Wolfsburg under completely different conditions under the rather idiosyncratic Schmadtke. At both stations there was an indication of what makes Glasner’s work special: After a certain period of familiarization, there are sometimes enormous leaps in quality relatively quickly. Glasner can give his teams the much-cited handwriting in a short time, even under different conditions.

When the 48-year-old came to Frankfurt, the club had just lost not only its coach, but also its sports director and its top scorer. A new start was needed at Eintracht, which Glasner then heralded and moderated after an initially bumpy start – with the first international title in 42 years as the crowning glory.

A few weeks ago, defense chief Martin Hinteregger and Filip Kostic, one of the most important players in Eintracht football in recent years, left the club. Again, the start was anything but optimal, but the progress of the Frankfurt team after six competitive games is enormous. Which suggests that Glasner’s groundwork, his meticulousness and attention to detail are among the best in the Bundesliga.

Even last fall, when things weren’t going so well for Frankfurt, observers praised the enormous diligence and persistence with which Glasner taught his team the set pieces of “his” football in the training sessions. Glasner is incredibly consistent – but not stubborn or narrow-minded, but flexible and appropriately variable and pragmatic.

He didn’t see Kostic’s departure as a penalty, but as an opportunity to give the team new impetus. This has led to a paradigm shift that is now evidently paying off early on. Glasner has said goodbye to the three- or five-man chain, he has put his nimble rail players from the old basic order with three central defenders behind them out of service and now trusts a 4-2-3-1, which not only comes across as an unusual series of numbers for Frankfurt, but also also in terms of staffing.

In midfield, the coach builds on the double six on Sebastian Rode and Djibril Sow. Two eights actually, who like to occupy the half-spaces and from there also become conspicuous on the offensive. The player profile of the two clearers, who aren’t really any, doesn’t really match what’s required in the center in front of the defence. Glasner knows that and yet Rode and Sow fit in perfectly. Because the trainer manages to tailor the tasks to the players in such a way that they feel comfortable in their roles.

Or Kristijan Jakic: He would be a trained defensive midfielder. Before the game at Werder Bremen, Glasner suddenly had the idea of ​​letting the Croatian play in the back four on the right. Jakic convinced and was allowed to defend against RB Leipzig and national player David Raum at the weekend – and again did a flawless job.

Eintracht Frankfurt: Creativity and short passes instead of flanks and power

The biggest changes are noticeable in the way the game is played with the ball. Frankfurt’s football is currently beginning to become much more delicate. Well over eleven crosses per game have now become eight, and the trend is falling. Only Cologne, Hoffenheim and Union used the stylistic device of the lateral cross more excessively than Eintracht last season. This has now become a place in the last third of the flank table. This is the very tangible and also visible consequence of the new game idea.

The processes in the half-spaces and in the center are more complex. Glasner recently called on Kolo Muani as the sole striker: a fast, agile and at the same time strong dribbling player with a lot of directness in his game. The two more classic penalty area strikers Rafael Borre and Lucas Alario currently do not fit the first plan.

Because it provides fast, direct combinations in the center of the game. Triangle formation, majority near the ball, relays even in the tightest of spaces. Eintracht has gradually found the right staff for this and is now using them profitably. How nimble and intelligent Mario Götze and Daichi Kamada sometimes resolve even the greatest spatial and opponent pressure with just a small movement and create a promising game situation from a supposed dangerous situation is remarkable.

Jesper Lindström, as the third attacking midfielder, has the necessary pace and, with his directness, complements the other two very well, who are allowed to express themselves more creatively. And in Muani, a line further ahead, they find a center forward who is altruistic enough and already has the perfect timing for a corresponding run in some sequences.

Because that’s what it’s all about in the end: Generating group dynamic processes from different set pieces, from the many strengths of individual players and creating flowing, coordinated movement patterns in all phases of the game. This is the first coaching job and Oliver Glasner is obviously a master at it.

That hasn’t been established yet, there are still enough coordination difficulties on the defensive and the mental double burden with the first games in the Champions League in Frankfurt’s club history is only just beginning. But how smoothly Glasner is currently finding a middle way from adapting to the opponents and maintaining their own identity – which is still growing – is formidable. In any case, the last two games were terrific in that respect.

In Bremen, Glasner’s ideas broke with those of Werder coach Ole Werner, whose team broke up with their man-oriented style of play in Frankfurt’s combination football. At the weekend against Leipzig, it was Eintracht that played the kind of football that the opponent was actually capable of. Frankfurt crushed their opponents with their pressing and overwhelmed them with short ball relays in midfield in order to then generate speed on the flanks and half-spaces.

“A great offensive performance, joy of playing, creativity, super depth in the game. Great discipline from all players on the pitch and an exceptionally good defensive performance,” Glasner saw and nobody could contradict him. Eintracht was the better Leipzig, but now it’s also about preserving these strong approaches. Then Glasner will be in demand as a motivator and mentor and sometimes also as a reminder.

“We are a team in which everyone has their job to do. Then we can be successful. If we think we can do it with a little less or more ego, we have problems!” The next task would now be to prevent this from occurring in the first place. Oliver Glasner will take care of them.