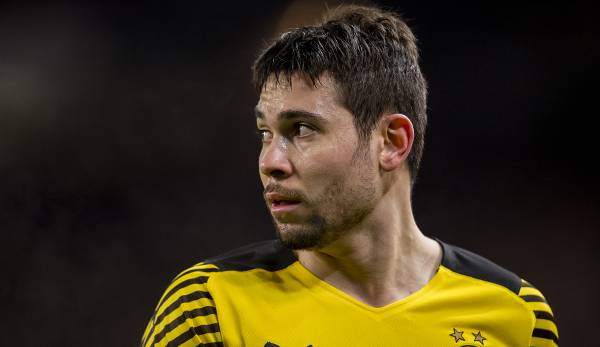 Raphael Guerreiro can be one of the best soccer players in the league – but at the same time a latent security risk for BVB. The Portuguese is thus representative of the Dortmund season.

Thomas Tuchel summed it up quite well when he was allowed to speak about Raphael Guerreiro. “He’s far too good to be pinned down to one position,” said the former Dortmund coach, underlining the big compliment by actually putting Guerreiro in several positions – albeit almost exclusively in midfield, either central, in the half lane or just on the left.

Back then in Guerreiro’s first season in Dortmund, BVB liked to play in a 3-5-2 with their own possession under Tuchel. These were rare excursions into a position that the trained offensive player Guerreiro does not like very much – but which he has not only had to occupy more often than he would like since this season.

Lucien Favre not only had the idea of ​​playing permanently with a back four at the beginning of his time in Dortmund, but also to order Guerreiro one line further back. And since then, Guerreiro has been a left-back who actually isn’t one.

In recent years, the player has also clearly asserted himself against Nico Schulz, who BVB actually bought at the time as a competitor or supplement. Which not only speaks for Guerreiro, but above all also clearly against Schulz.

Guerreiro: One of the best in the league with the ball

Before this season the problem on the left side of defense was actually already apparent with one who would have been much better off elsewhere and one who could never really demonstrate the level required for BVB. Nevertheless, those responsible took the considerable risk – especially since Guerreiro’s body had been prone to injuries and minor ailments in recent years.

The bad injury streak this season also compounded the problem at left back, meaning Guerreiro had to play there whenever he was fit. Only now and then, like on Saturday against Fürth, was the 28-year-old allowed to play on the rails. And then, even when relegated, they reveal those deficits that you see again and again from Guerreiro in the game against the ball.

When Borussia Dortmund has the ball, when Guerreiro can move in and play as a hidden eight, is involved in the ball circulation and moves into or into the opponent’s penalty area and finishes himself: then that’s one of the finest players in the entire league. A filigree technician with a desire to score and creativity like a ten, his left foot a real weapon, a game-changing player.

A sore point in the game against the ball

In the game against the ball, however, Guerreiro remains a sore point and a constant target for the opponent. Greuther Fürth used this again and again, especially in the first half, using the small space between Guerreiro and the left central defender of the back three Dan-Axel Zagadou for passes in depth, which Guerreiro caught again and again in the truest sense of the word on the wrong foot . Even after several years as a hidden defender, Guerreiro sometimes lacks a feeling for space, and Guerreiro is not in a defensive position in space, but without much orientation.

And because there is also a lack of top speed and a certain robustness in duels, BVB has a lot of football culture to offer on the left side, but little resilience. That’s not the only reason, but also one of the reasons for 51 goals conceded in the Bundesliga alone this season.

And it sums up the dilemma quite well: BVB can play beguilingly beautiful football and can be dangerous for many teams not only in the Bundesliga but also in Europe and at the same time is so extremely vulnerable and changeable in its performance.

In the loud and recurring debates about mentality, leadership strength, will or “attitude”, on which those responsible had apparently agreed for several months, Guerreiro was at best a marginal figure. Because, despite his experience, his successes and his standing in the club, he has not formulated any claim to leadership and probably could not fulfill it. The Portuguese is too introverted and reserved in his manner for that.

Guerreiro still has a contract in Dortmund until the summer of 2023 and if BVB still wants to make money by selling the player, then the coming weeks would be the right time to do so. A few weeks ago, the signs were still on contract extension, Guerreiro himself had expressed accordingly.

“If I feel comfortable in a club, and that’s absolutely the case at BVB, then I’ll be happy to stay. In my opinion, Dortmund is a big club. I have an important role here and I’m a regular player. At a new club I would have to completely prove it again,” Guerreiro said at the time. “When I’m not playing, I don’t feel good. I feel very comfortable at BVB. Of course, if another big club comes, I’ll think about it. But I currently see my future in Dortmund and not somewhere else.”

In the meantime, however, there should be considerations not only to separate from Schulz. Guerreiro is also said to be up for grabs. In addition, rumors about Gladbach’s Ramy Bensebaini are piling up.

Soon back in midfield – or at another club?

“There are players who want to leave the club and there are players who have to leave the club. We will then try to set up the group in a way that we feel good about and then push a few things next year,” he said Coach Marco Rose after the violent clap against Leipzig in early April. The future sports director Sebastian Kehl announced in a big interview with the Süddeutsche Zeitung that he wanted “to have lots of boys here, but they really want this club and tear themselves apart!”

BVB will have to buy a mentality – or attitude – after failing to develop it internally for a season. And maybe there will actually be two left defenders or Tom Rothe will become an option for the pros more often.

Then Raphael Guerreiro could switch back to where he is in much better hands: In a more offensive role, with a player behind him as protection.