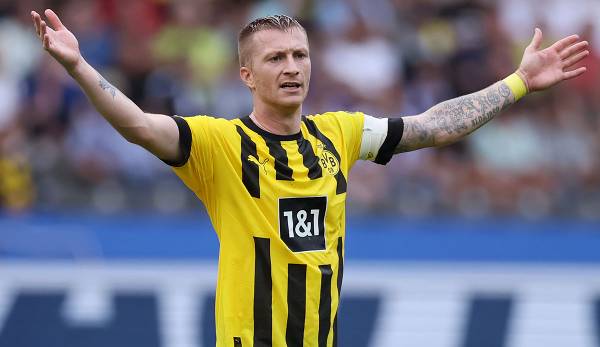 Borussia Dortmund earned the next win in the 1-0 win over TSG Hoffenheim and showed a face that was often missing in the past. Whether BVB can become dangerous to FC Bayern in this way is another question. But: Marco Reus will no longer have to face such a hated question.

It’s one of the traditional phrases in football that “the spark must fly to the spectators”. You want to take the followers with you, pull them into the game with an impulsive performance. The pros from Borussia Dortmund literally succeeded on Friday evening in front of 79,300 spectators in the Signal-Iduna-Park, which was not sold out.

Dortmund ran a lot in the 1-0 (1-0) win against Hoffenheim – and two speedsters stormed onto the pitch. First a fairly young fan during the game, who was lovingly escorted off the pitch by Jude Bellingham. And then after the final whistle, when a strong supporter ran across the lawn.

The Dortmund players started 276 sprints and ran almost 116 kilometers. “You could see that we had good preparation and can go 90 minutes. No one took the liberty, but that’s the way it should be,” said Marco Reus, who scored the only goal of the evening in the 16th minute and so on became the match winner.

Marco Reus and the question of mentality

Reus himself was a prime example of BVB’s fierce and intense performance: the captain went into twelve duels, fought five balls from the opponent and earned a lot of applause from the stands. In the past, Reus was often asked the question of mentality in connection with his team and was very angry about it.

“The 2: 2 was a mentality problem? Are you serious? The same shit every week,” Reus complained in an interview after a 2: 2 win against Eintracht Frankfurt in 2019, triggering a debate that followed a loss of points or a defeat of BVB flares up again and again. Just like last time in the 2:3 against Werder Bremen, when Dortmund gave up a 2:0 lead after the 89th minute.

The mentality was right again at BVB against Hoffenheim – in the fifth game of the season, after the games against Bayer Leverkusen and Hertha BSC, there was the third 1-0 this season. Not always beautiful, not always handsome, but combative, intense and focused on victory.

Even the enemy had to acknowledge that. Grischa Prömel, a born fighter from the Union school, praised Dortmund, who were not only “extremely poisonous, extremely good in duels” from his point of view. For years it seemed to be a BVB phenomenon to play exciting attacking football and then too often die in beauty.

You have to give BVB credit for playing well for 45 minutes against Hoffenheim. “We played an outstanding game, especially in the first half,” said coach Edin Terzic. “We created a lot of chances on offense, let the opponent run well and kept creating space.”

When Hoffenheim coach Andre Breitenreiter made three changes during the break, Sebastian Rudy called up a classic six, Andrej Kramaric moved back to eight and Muhammed Damar brought in a strong ten before that, the guests came into their own and Dortmund were a bit out of place.

If Hoffenheim had used the ball possession phases better, it would have been exciting again. If you want to blame BVB, you could name the exploitation of chances, which was also a shortcoming in Berlin and kept the opponent alive. But Dortmund have learned to defend the result, also because you get a lot more intensity in midfield through the pure formation.

Jude Bellingham has found a partner in Salih Özcan who is good for Dortmund. After the good performance in Berlin, the next top performance against Hoffenheim followed. “The two did really well last week, they did even better this week. The gaps were much smaller, they defended together, protected each other. Jude put the opponent under so much pressure further up that Salih was able to conquer the second ball. That was really good,” said Terzic.

BVB: The bad luck with injuries is back

And yet the formation of the two is not set in stone, Terzic wants to “leave it open” to play with a different formation: “Depending on what is needed.” Because you don’t want to give up the handsome football completely. The squad is far too talented for that. BVB cannot and does not want to define itself only through struggle and intensity.

Either way. BVB greets at least until Saturday afternoon as the leader of the table. Of course, Borussia wouldn’t mind being at the top at the end of the season. It is clear that BVB increases its chances of winning against most opponents with its pragmatic style of play. The next few weeks and months will show whether it will be possible to pull this off long enough to pose a threat to FC Bayern.

Because one thing has remained from the past: the many injuries. Karim Adeyemi (toe injury), Raphael Guerreiro (ill) and Mahmoud Dahoud, who is having an operation on his shoulder and for whom the football year 2022 is probably over, were missing against Hoffenheim. They were joined against Hoffenheim by Jamie Bynoe-Gittens, who dislocated his shoulder. The downtime is still unclear.

Especially in the intensive weeks with the mammoth program up to the 2022 World Cup, BVB – like every other team – is dependent on rotating here and there and getting as many players fit as possible. If there should be bottlenecks – the second speedster was on the road pretty fast on Friday…

Bundesliga: The table before the Saturday games