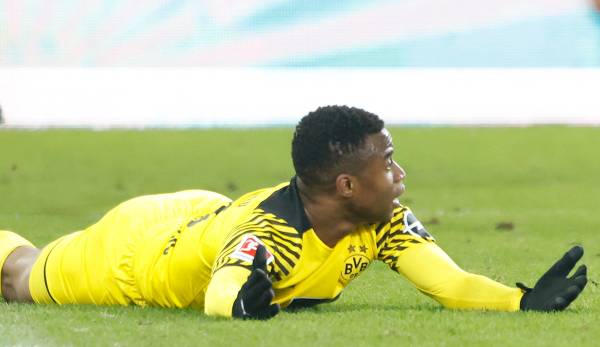 Youssoufa Moukoko went through a “shitty season” at Borussia Dortmund, at the end of which he irritated with posts on his social media channels. The 17-year-old has been reluctant to extend his contract, which expires in 2023, for a long time. A premature departure of the striker would be a bitter defeat for BVB.

“The 2022/23 season is marked by a new start in sport,” said Sebastian Kehl in Borussia Dortmund’s press release, in which Edin Terzic was introduced as the new head coach. The two will have to manage and moderate another upheaval, which is already accompanied by a lot of movement in the squad at this early stage.

BVB has already presented six newcomers and it will by no means stop there. Eight departures are also recorded, Dortmund’s team and its hierarchy are being turned upside down after a season marked by numerous disappointments. Terzic has a lot of tricky construction sites to work on, especially apart from the integration of the new players and the search for a replacement for the emigrated striker Erling Haaland.

Probably the most difficult personal thing for Borussia is someone who has been with the club for six years: Youssoufa Moukoko. There are many reasons why this is the case, most of which have accumulated over the past twelve months.

Apart from the hard facts, it can first be said that all topics to do with Moukoko are discussed in the Dortmund environment with enormous emotionality and sometimes impatience. The expectations of the still only 17-year-old striker are high, even outside the city. Too high, one would like to say at many points in the debate.

BVB: Moukoko and the changes in the professional field

Moukoko has a goal rate in the BVB youth team that will probably remain unmatched in this performance area for many years. He has become the youngest player in the Bundesliga and Champions League in the pros, and no one before him has scored a goal in the Bundesliga at a younger age. Moukoko’s career has always gone steeply in one direction: uphill.

This was also due to the fact that he did not have to suffer any significant injuries or other setbacks in the junior division. Moukoko was always healthy, always fit, he always played. The club and he knew and discussed that this will change with the seniors. But there is a difference between exchanging information about it in advance and then feeling and experiencing it when these scenarios occur.

These scenarios happened to Moukoko in abundance, which is remarkable and made it understandably difficult for him to cope with them. Since making his Bundesliga debut the day after his 16th birthday in November 2020, Moukoko has suffered six injuries lasting at least two weeks, three of which were muscle injuries.

Youssoufa Moukoko: “I just want to forget the season”

During all this time, Moukoko has also gained a lot of new experiences: Not only did he have to deal with the fact that he had to fight his way back from an injury and suffer the next setback a little later, his body also had to adapt to training with the professionals. In addition, he was now part of a new team, which is peppered with internationally experienced adults and in which he always had to prove himself anew.

The short playing time last season – Moukoko only played 482 minutes and four starting eleven places in all competitions – created a negative cycle that was difficult for such a young player to tame. “I was very frustrated. It wasn’t that easy for me, that was really a lot. I learned a lot,” said Moukoko a month ago in the in-house BVB podcast.

There, the attacker made a very clear, tidy impression and found clear words for the development he had to go through in the past season, both sportingly and personally. “I’ll be happy when the season is over,” Moukoko said with two games to go. “I’m not happy, to be honest. Without the injuries, I would have gotten more playing time. You have to be able to deal with setbacks. I managed that very well, even if it was annoying for me. I just want to forget the season because it’s been a crappy season for me.”

Former coach Marco Rose had hinted several times that he would not use Moukoko for simple football reasons. Rose still saw deficits in his “tactical discipline and work against the ball”. “It’s also important that he shows that he wants to play more. But he has to earn it through training and playing,” said Rose.

What makes the situation for Moukoko and especially BVB particularly tricky is the question of where Moukoko will play next season. The 17-year-old still has a contract until 2023, which the club has been wanting to extend for a long time. Borussia’s appreciation for Moukoko has always been high and still is today, but nothing has been signed yet.

This is where the part comes into play, which Moukoko and those around him are responsible for themselves and have thus brought further explosiveness to the discussions. “It is not a matter of course that Youssoufa is extending BVB,” said his advisor Patrick Williams at the end of January picture.

His answer to the question in the BVB podcast, where he goes when he wants to vomit, fits into the picture of this episode: “To the consultant!” Moukoko said there. Only a little later, on the day before the final game of the season against Hertha BSC, he published it on his social media channels two disturbing images and wrote: “One last time! After 6 years with beautiful moments I have to say goodbye. Thanks for everything.” He then deleted the posts.

These two advances surprised and annoyed those responsible in Dortmund, who also made this clear to Moukoko. The situation seems to be quite deadlocked, especially since Moukoko asked the Funk media group commented on his future on the sidelines of the U21 game against Hungary: “I don’t want to say anything about that.”

BVB managing director Hans-Joachim Watzke is hoping for the Terzic factor when it comes to extending the contract, who will also bring along an assistant coach in Sebastian Geppert, who says he has “an extremely close relationship” with Moukoko due to the time they spent together in their youth. “I think he’s extremely motivated right now. It’s no secret that he and Edin Terzic have a close connection,” said Watzke and believes in “a decent chance to extend the contract with Youssoufa.”

BVB: Sale of Youssoufa Moukoko would be a bitter defeat

Failing that, however, going into the season with Moukoko and hoping for a change of heart from the player’s then-unknown future would be more of a risk than an opportunity. In the first place, a transfer-free departure would threaten.

Selling Moukoko this summer would again be a severe defeat for BVB given his undisputed sporting and possibly later financial potential and the hopes that the club has placed in his development for years.

The ball is his. It is likely to be the first in his career in which the strong Moukoko clearly hesitates in making a decision.

BVB: Youssoufa Moukoko and his statistics in the 2021/2022 season