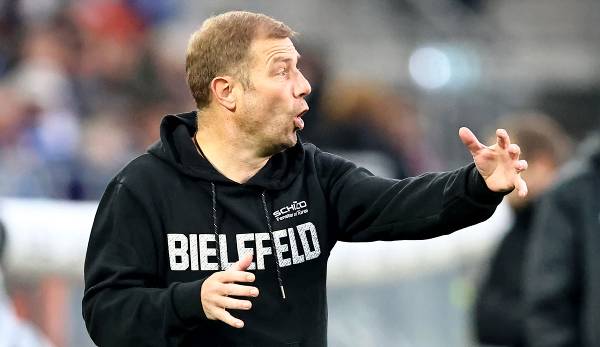 After the eleventh winless competitive game in a row, the mood on the Alm changes. Especially coach Frank Kramer is under pressure at Arminia Bielefeld.

The disappointment of the disappointed fans was felt above all by coach Frank Kramer. “Kramer out,” rang out through the SchücoArena. “Nobody likes to hear something like that, that’s clear. But you have to show your attitude, and I’ll do that,” said the coach of Bundesliga club Arminia Bielefeld, who still did not win, after the 1: 2 (1: 1) defeat against Mainz 05.

“Everyone can be sure that I will do everything I can to achieve the turnaround together with the team,” added the 49-year-old fiercely. The turnaround seems far away for Arminia, the only win of the season so far was achieved by East Westphalia in the first round of the cup in August at the regional league team Bayreuth (6: 3).

In addition, the Bielefeld people make life difficult for themselves with blatant individual mistakes. Central defender Amos Pieper was the unlucky fellow against Mainz when he was the last man to mess up the ball and invite Jonathan Burkardt to score the winning goal (68th).

“He’s a really good boy. He’s a good footballer and he’ll put up with it,” said Burkardt, who was U21 European champion with Pieper in the summer, cheered the 23-year-old after the game.

Bielefeld: Air for Kramer is getting thinner

“We’re not going to pillory anyone here, Amos wants and will learn from his mistake,” said Kramer, whose team was not convincing even apart from the defensive errors. No orderly development game, no creativity on the offensive.

“My team took a bite and really wanted to, but it wasn’t all aimed at the goal,” admitted Kramer, for whom the air on the Alm is slowly getting thin. With just five points, Arminia is still in relegation rank 17, plus the bitter cup-out (2: 3 after extra time in Mainz) during the week.

And the next opponents are Stuttgart, Wolfsburg and Bayern Munich. “We have to sort ourselves, have to be clear and have to stand up for one another,” said Kramer.

Sports director Samir Arabi was initially silent after the latest bankruptcy. Compared to the Westphalia sheet he spoke plainly on Sunday.

“We don’t let ourselves be influenced,” said Arabi: “I deal with the mood in the team. The team has to be a conspiratorial bunch and defend itself against resistance. The team has to maintain that. We deal with that and with nothing else. ” A separation from Kramer is “at the moment in terms of content at all” no question.