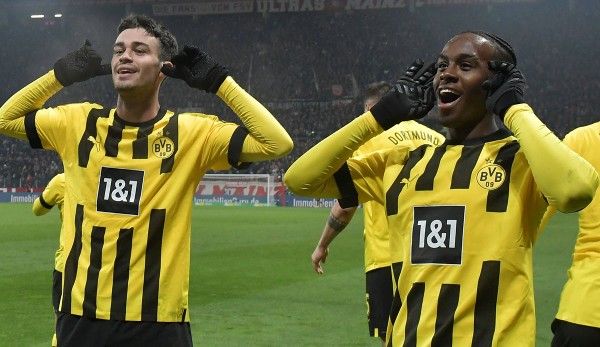 Borussia Dortmund clinched a 2-1 Bundesliga win thanks to Giovanni Reyna’s late goal, cutting the gap to Bayern Munich to five points. 1. FSV Mainz 05 defended well for a long time, but then lost out. The winners, losers and the grades as well as individual reviews of the BVB pros.

Dortmund’s appearance was not convincing. The individual reviews are correspondingly different. A big winner of the game came up for FSV, a loser will probably soon be back on the bench at BVB.

Both substituted in at the same time, both initially inconspicuous, but then both with the decisive scene. After a corner, Haller extended his head to the free-standing Reyna and he pushed it in. Important three points for BVB and a recommendation for the starting eleven at the weekend. Grade: 2.5 for both.

The Frenchman had a great day against BVB. Although it has to be mentioned that Dortmund had hardly any ideas in the forward movement, but that should not detract from Caci’s performance. The 25-year-old has won all of his six ground tackles as well as the only aerial tackle. He was also very present in the build-up game, brought 46 of 52 passes to a teammate and had the most ball contacts in the Mainz defense (71). Grade: 2.5.

Before he was substituted, he led most of the duels at Dortmund, but lost more than half of them and only had one noteworthy offensive scene. Otherwise as usual: couldn’t get his pace on the pitch and got stuck in the one-on-one situations. Shouldn’t get many more chances from the start. grade: 5

Gregory Kobel: No chance when conceding a goal, otherwise hardly demanded by mostly toothless Mainzers and rarely used in the build-up game. Grade: 3.5.

Julian Ryerson: Only the corner recklessly indebted, which led to the lead of Mainz, then equalized. Subsequently involved in many Dortmund attacks. Interpreted his role very aggressively. He, too, could hardly wake up the meanwhile sleepy BVB. Grade: 3.5.

Nico Schlotterbeck: In the construction game as changeable as ever. A few good passes were reliably followed by one or two bad passes. Also defensively here and there with weaknesses. grade: 4

Raphael Guerreiro: Agile in the game forward, uncertain in the backward movement. Couldn’t do much with the shifts that were played into his foot. Shortly before the end, he gave away a manpower situation near the Mainz goal. Grade: 4.5.

Emre Can: Dropped back and forth between the central defenders as a defensive cover, giving Ryerson and Guerreiro their offensive freedom on the outside. As a result, however, a player was missing in the center in front. Can could do little for his tactical role, but his build-up game was more than expandable. Even defensively not always with the security that BVB hopes for from him. This time, however, there were no big mistakes. grade: 4

Salih Ozcan: Inconspicuousness personified. Can took over the structure of the game, on the offensive Brandt was the most dominant midfielder and somewhere in between the ex-Cologne player was often hiding. The game largely passed him. Grade: 3.5.

Julian Brandt: One of the strongest in BVB dress. Picked up a few balls in the center, which was otherwise too often deserted, drove them forward or shifted them wisely. The longer the game lasted, the less influence he had on it. Note 3.

Karim Adeyemi: Agitated again, too headless again. Adeyemi loses too many balls and rarely manages to create danger on the right. Defensively not a factor and so more of a risk for your own back line. Grade: 4.5.

Youssoufa Moukoko: Efforts to start up, tries to show himself. However, was rarely served and had too little support around him. He alone rarely managed to get the Mainz defense to work up a sweat. Grade: 4.5.

Jamie Bynoe-Gittens (for Malen, 62nd): Significantly more active and dangerous than its predecessor, but a bit unlucky on the offensive. Grade: 3.5.