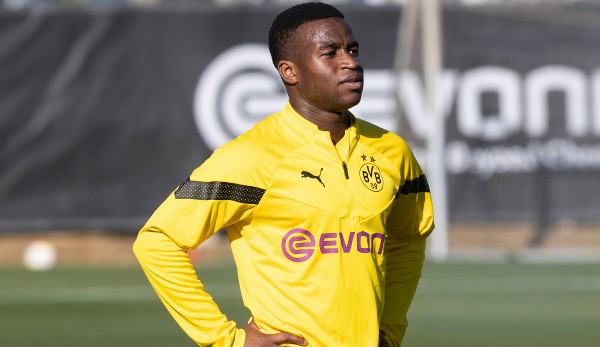 With Youssoufa Moukoko, Borussia Dortmund has been able to retain its absolute top talent until 2026 – and has prevailed against well-known competition. But now the 18-year-old is really getting into professional business. Will he stand the pressure? A comment.

For BVB, the extension with Moukoko is nothing short of a huge success. Dortmund almost had to let a great talent go without being able to collect a transfer fee. Within the scope of his own possibilities, Sebastian Kehl managed to convince the attacker of a medium-term future in Dortmund.

That is not a matter of course. After all, top clubs like Chelsea were interested in the international. Clubs where the money is much looser. Moukoko might have heeded this call if Kehl hadn’t convinced him otherwise. Most recently, several images of intense and lengthy conversations between the two appeared.

For Borussia Dortmund, the extension means one thing above all: a drop in pressure. In view of the expiring contract, Kehl and Co. were almost obliged to keep it. The working paper now runs until 2026. Loud Ruhr news Moukoko will receive a base amount of around three million euros annually, which can increase to up to six million euros depending on success. A reasonable and fair deal for both sides.

The ten million euros in earnest money and the five million euros in commission that Dortmund pays to Moukoko and his agent Patrick Williams should hurt a little more. BVB does not have to take responsibility for this either. If everything goes reasonably normal, you will earn a lot of money with the youngest Bundesliga debutant in history anyway. Money you wouldn’t have gotten without the extension.

Youssoufa Moukoko: BVB wins, but the player too?

While BVB emerges from history as the undoubted winner, things are a bit different with the player. On the one hand, Moukoko made the only right decision. On average, he is directly involved in a BVB goal every 98 minutes this season, but internationally it has been shown several times that he still has a long way to go, that he often still lacks assertiveness and presence, and that he is not yet involved in the game participate intensively enough.

At Borussia Dortmund he can develop in an almost perfect environment for talent – unlike at top-class clubs like Chelsea or Newcastle United. This sporting perspective should be more valuable than a financially lucrative offer from England. In this respect, reason ultimately triumphed with Moukoko.

But for the 18-year-old, professional business is only just beginning.

For the first time in his still young career, he has an intensive contract game behind him, in which he has improved financially many times over. Previously, the striker is said to have earned an amount in the low six-figure range per year, now he can earn up to six million euros. This automatically creates expectations. There will now be a different kind of pressure if things don’t go that way. A pressure that he and BVB have to withstand.

And even if Moukoko is only 18 years old, the business is unforgiving in this respect. Each of his actions will be evaluated differently in the future than before his rise up the club’s financial hierarchy.

But above all, things are now getting really interesting in terms of sport. What prospects did BVB promise him and how can that be implemented? With the return of Sébastien Haller, the ninth position will in all likelihood be blocked soon. Moukoko is not a winger, nor is he a clear ten.

He has had his best performances when he can move freely in the center – ideally around another striker. However, coach Edin Terzic’s system does not provide for such a position – and the problems in midfield have so far been too blatant to shovel one out for him.

Moukoko will continue to get his playing time at BVB. Especially at the beginning of this calendar year, when Haller is still looking for rhythm and fitness. But then it gets exciting. He has to deliver and assert himself as quickly as possible – ideally on Sunday against FC Augsburg (3.30 p.m. in the live ticker).

The fact that he first tried it at BVB before moving to a real top club is logical and a healthy self-assessment. Youssoufa Moukoko’s professional career is now really taking off.