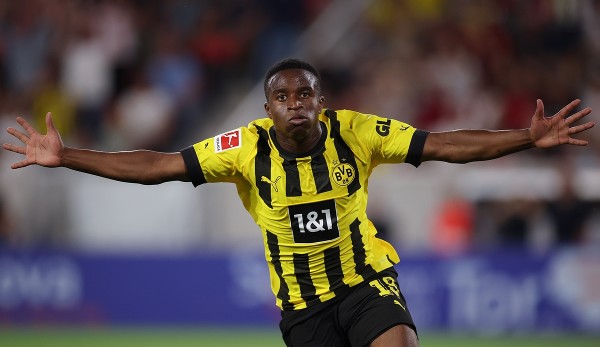 Borussia Dortmund have extended Youssoufa Moukoko’s contract. BVB announced this on Saturday afternoon on its website. The striker, whose contract would have expired in the summer of 2023, has signed until 2026.

“Youssoufa is an exceptional player who we trained ourselves and in whom we still see huge potential for development,” said sporting director Sebastian Kehl. “So I’m glad that we were able to convince Youssoufa before the start of the second half of the season, which is so important for us, that he has the best prospects at BVB and that his path is far from over here.”

“I feel the trust of the coaching staff and I have an environment here in which I can develop perfectly,” said Moukoko. “Of course I was honored by the interest of other clubs, but in the end it’s a decision of the heart. The fans have always supported me and I want to give something back to them and to the club.”

According to reports, the four-year contract includes a base salary of three million euros, which can increase to five million through bonuses, and a signing bonus of ten million euros.

The extension means the end of months of negotiations and constant speculation. Only a few days ago Kehl gave Moukoko an ultimatum.

“We made him a very attractive offer that gives him a lot of room for development,” said Kehl in an interview with the table football: “Youssoufa can now accept this offer and commit to Borussia Dortmund – or we will go our separate ways.”

The 18-year-old is said to have been courted by several top English Premier League clubs and also by FC Barcelona.

In order to prevail against competitors like the nouveau riche Newcastle United, the picture reported a 40 million package for Moukoko, which also includes a standard commission payment of 10 percent to consultant Patrick Williams.

For eddy previously had, among other things, a Instagram-Post from Moukoko, in which he described sums that were rumored to have been rejected by the players as a “lie” that he will not accept: “Even though I’m still young, I won’t let myself be in my decision about my future put pressure on me. No player is bigger than the club. I am and never will be bigger than the club and in the end I’m just a small part of it.”

Moukoko, who has played twice for the German national team, has established himself as a regular in Dortmund’s strike team this season. After 22 competitive games, he has six goals and six assists. In 2016, as an 11-year-old, he switched from the FC St. Pauli youth team to the Dortmund youth team and impressed there with an outstanding goal quota.

BVB: Youssoufa Moukoko and his statistics as a professional at Borussia Dortmund