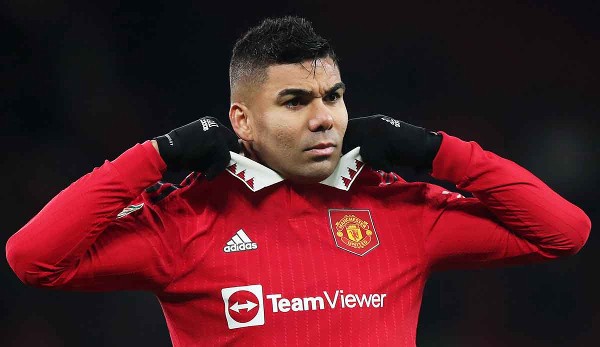 Despite initial skepticism and initial difficulties, Casemiro developed into the hoped-for reinforcement in defensive midfield at Manchester United. The “cement” also convinces with English virtues.

Casemiro is possibly the most English Brazilian in the world. The core competencies of the 30-year-old from near São Paulo include neither tricks nor dribbling, but above all tackling and tackling. When he moved to Manchester United last summer, what should come together came together in a way.

In fact, Casemiro sometimes shines like a true English hero with his style of play in the Premier League, for example in Manchester United’s 3-0 win against Nottingham Forest on Tuesday: he started Anthony Martial’s 2-0 with a strong tackle on his own baseline and also in the run-up to Fred’s 3-0, he managed to win the decisive ball. Probably nowhere else are such actions celebrated as in England. Limiting Casemiro to that doesn’t do him justice: once again he shone with an outstanding passing game.

He received top marks in the trade press, with United legend Rio Ferdinand tweeting: “I love this guy.” This guy was greeted with skepticism last summer after his €71m transfer from Real Madrid to Manchester. Also from Ferdinand, but the most exemplary is probably a statement by the TV expert Graeme Souness, who said: “He is not a great player and never was one.”

Casemiro won five Champions League titles with Real in eight years, but was mostly overshadowed by the outstanding strikers. In the shadow of Gareth Bale or Cristiano Ronaldo, Karim Benzema or Vinicius Junior. Yes, even in midfield, his two eternal companions were praised in public: German world champion Toni Kroos and Luka Modric, who was even awarded the Ballon d’Or in 2018.

How important his colleagues consider Casemiro to be was shown at the latest when he left surprisingly last summer. Kroos and Modric wrote in the mark an emotional letter, his compatriot Vinicius wrote on Instagram: “There is not much to say. Thank you and thank you. Every team needs a Casemiro.”

The reason for the skepticism about the transfer was not only Casemiro’s high transfer fee despite his advanced age and rather unspectacular style of play, perhaps even more because of United’s past. Since the successful era under coach Sir Alex Ferguson, the English record champions have specialized in spending a lot of money on famous players (and coaches) without a plan. Prime examples are Alexis Sanchez, Memphis Depay and Jadon Sancho, who flopped despite high transfer fees and high expectations.

Casemiro also had a hard time in Manchester at first. He joined an unsettled side under new coach Erik ten Hag who had embarrassed themselves in the opening two days against Brighton & Hove Albion and Brentford FC. The unclear future of superstar Cristiano Ronaldo caused additional unrest.

Ten Hag initially trusted homegrown Scott McTominay on the six, Casemiro only came off the bench. His personal turning point came when he lost 6-3 in a derby against Manchester City in early October. Casemiro came on when the score was 4-1 and visibly structured United’s game. He has missed just three minutes in eight Premier League games since then. He probably had his greatest performance in the away game against Chelsea, when he headed deep in injury time to equalize 1-1.

United’s midfield problem area has increasingly turned into a strength since Casemiro’s integration into the starting XI. The interaction with his more offensive neighbor Christian Eriksen, who was also only signed in the summer, is getting better and better. “It’s fun to play alongside him,” said Eriksen. “If you lose the ball, he gets it back – and besides, he’s good with the ball himself.”

Casemiro dominates United’s midfield with an almost intimidating presence. He delivers clever game shifts, prevents counterattacks early on thanks to strong positional play and tackling. Possibly his greatest strength, however, are tackles, which were once again well demonstrated in the win against Nottingham. Casemiro has recorded 35 tackles since joining United’s starting XI. Second most after Joao Palhinha of Fulham FC.

Neymar: ‘Casemiro is the best midfielder in the world’

In an interview with the club’s official website, Ten Hag compared Casemiro to “cement” before the World Cup in Qatar: “He makes the difference both in possession and in possession of the opponent. He gives the team that certain something and helps them to dominate . He can read the game and supports his teammates by showing them the correct positioning.”

The World Cup, which was disappointing from a Brazilian point of view, did not affect Casemiro’s top form. He had around two and a half weeks until the game against Nottingham to recover from the quarter-final defeat by Croatia. Casemiro himself was not to blame for the bankruptcy, he convinced in the game and converted his attempt in the penalty shoot-out, which was ultimately lost.

Earlier, Casemiro secured Brazil’s progress to the round of 16 with his goal in a 1-0 win against Switzerland on the second day of group play. “Casemiro has long been the best midfielder in the world,” tweeted his then injured colleague Neymar. When asked about this, national coach Tite said: “I agree with him.”

Now the supposedly best midfielder and most English Brazilian wants to ensure that he can play in his favorite competition again next season. United are currently fifth in the Premier League, but are just one point behind the first Champions League qualifying spot. There are still title chances in the two national cup competitions and in the Europa League.