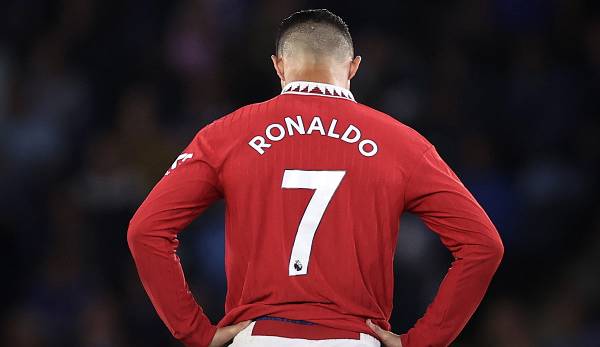 Cristiano Ronaldo’s suspension from Manchester United is the inglorious culmination of a partnership long doomed to fail. However, the only culprit is the 37-year-old, who not only sabotages his club and Portugal’s World Cup chances with his behavior – but also his future as a footballer. FC Bayern and Borussia Dortmund, on the other hand, deserve a compliment. A comment.

Those involved have known for a long time that things could not go well with Cristiano Ronaldo and Manchester United this season. One can perhaps still argue about the exact date: since July 1, when Erik ten Hag was presented as a new coach who was supposed to turn the club completely inside out and in whose concept a 37-year-old striker didn’t fit at all? Or since spring when United failed to qualify for the Champions League?

At least since September 1, when it was clear that CR7 would not leave the Red Devils before the transfer window closed. The superstar had already made several public missteps and it had become clear that under ten Hag it would always be enough for the joker role.

Nevertheless, Ronaldo stayed in Manchester, although consultant mogul Jorge Mendes had desperately offered him to all top European clubs. Like an aging Siemens washing machine on eBay classifieds: “Okay, it already has slight signs of wear and doesn’t spin as many times as it used to, but it was a multiple test winner! And the brand really makes a difference.”

But because no one took the bait, the Portuguese and the Red Devils were forced to remain partners, at least until the winter transfer window opened on January 1. And now, after the inglorious departure during the 2-0 win against Tottenham Hotspur on Wednesday evening, only one bitter conclusion remains: Ronaldo ruined everything.

Next scandal: The long list of Ronaldo’s antics at United

Ronaldo at Manchester United: where is the model professional?

Ronaldo is obsessed – in a good way. Obsessed with victories, with titles, with goals – perhaps with the latter most of all. That made him the top scorer in history. Legends have grown up around his eagerness to work and his discipline off the pitch. He still wants to play and score until the EM 2024 – at least.

He should have tapped into this unique self-discipline in the past two months: Change fell through, United are not playing for the big titles – even if they do! Since September 1st it’s all about the World Cup in Qatar. For the one big title that is still missing.

Ergo: keep your feet still, focus body and mind fully on the upcoming tournament and get in the best possible shape. The fact of not playing through 90 minutes twice a week until mid-November could even have turned out to be a “luck in disguise”. And it would have looked good on his legacy: CR7 the team player who gives everything even without a regular place and premier class.

From his point of view, he should have put on a good face to the bad game before the World Cup. To be more precise: Until the away game at Fulham on November 13th, 25 days after the Spurs game. In less than four weeks, the cards would have been reshuffled. What’s four weeks in a 20-year career?

Ronaldo is sabotaging Portugal’s World Cup chances – and its future

Now Ronaldo could face the worst days of his career instead. United rightly suspended him, ten Hag confirmed on Friday that Ronaldo refused to come on, and his “non-apology” via Instagram did not exactly suggest insight. It is now completely open that he will play for his club again before leaving for Qatar – good preparation for the World Cup looks different. And that’s not all:

And: The consequences for the time after the World Cup are not yet foreseeable. Despite everything, Ronaldo may be playing a strong World Cup with Portugal. It would have been his best argument for a move to a Champions League club in winter. But who wants him now? The model professional has become an impulsive, grumpy enfant terrible. Which top team does that voluntarily?

At this point, a compliment goes to FC Bayern Munich and Borussia Dortmund. Both teams could have signed Ronaldo in the summer – and both could have found good reasons, following Robert Lewandowski’s departure and Sébastien Haller’s tragic illness. They wisely canceled. Such a CR7 does not make a good team better.

And, as a look at Manchester shows: not even a mediocre one anymore.