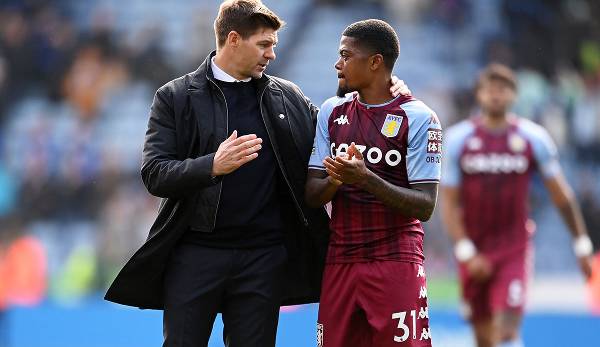 Leon Bailey witnessed a shooting at the age of seven and left his family in Jamaica at the age of 12 to start a new life in Europe. The path to star purchasing at Bayer Leverkusen was not easy either. With a life story like that, a messed-up season at Aston Villa doesn’t really matter – even if there is now a ray of hope.

When Steven Gerrard took stock of his first season at Aston Villa at the end of last season, he was unhappy with the result: “We stayed in the Premier League and finished 14th, which is unacceptable and which we don’t do at all are satisfied.”

He only took over the club in November 2021 in the relegation battle, so many people around the club thought it was okay not to have to go to the second division. There was nothing more she could do. This satisfaction with the minimal – also within the team – really annoyed the Liverpool legend.

He said: “I want players to be obsessed with winning. I want winners in the dressing room. I don’t want players who are content to finish 14th in the league and out of the cup early to fly. That must hurt us!” He wanted to create a “new culture”, said Gerrard at the time – which also led to a change in the squad.

Loser away, mentality player here, was the task. Those around the club often mentioned Leon Bailey among the players who could potentially leave. It cost 40 million euros, but almost never showed why it was worth the investment.

There was a small change, but Bailey was never an issue.

But on the contrary. The excellent pre-season, in which he was the best Villa player for many observers, culminated in a terrific performance in the friendly against Manchester United in Australia at the end of July. Substitute Bailey played superbly and scored the 2-2 in added time. His coach saw “a strong signal” for the new season.

Gerrard praised: “It was more than just an influence. He changed the game, he showed energy, he showed speed, he has the hunger to worry the opponent. He came back from vacation a different player. ” One who should now justify the 40 million euros.

For his protection, it must be said that Bailey was thrown back by injuries in his first year and a high-quality sporting season was hardly possible. “[Gerrard] says he likes what he sees. I’m looking forward to the new season and going into battle with the team,” said Bailey himself.

Leon Bailey: One of 23 adopted children

Of course, the many setbacks of the past season kept the winger busy, but the 24-year-old has experienced so much in his young life that he knows how to deal with negative experiences and how to weigh them. He knows there are worse things in life than missing a few Premier League games or not being an instant hit.

You know that if you’re from Cassava Piece, a ghetto neighborhood in Kingston. There, in the capital of Jamaica, Bailey grew up. “There were many times when there was no money for food or money to go to school,” he says Guardians: “They were hard times, but I’m used to hard times. That’s why I never let myself get down.”

It’s not easy to talk about the dark side of life. Sometimes the memories grab you and won’t let go. But sometimes it also has a liberating effect. Bailey is someone who likes to look ahead: “I just rebuild myself and learn from it. It makes me stronger and I want to keep going.”

He is also adept at constantly starting over. Bailey was just 12 when his adoptive father, Craig Butler, took him to Europe on a one-way ticket. Butler is an important part of his life story. Bailey was one of 23 (!) boys that Butler adopted. He wanted to get them off the street, give them a perspective. Also out of selfishness, but if it could help the children, that was okay.

Craig Butler once recounted how he remembered how traumatized Leon and a few other boys were when they witnessed a shooting in the street when they were about seven years old. “I’ve seen a lot and I don’t want my friends or family to have to have that experience,” Bailey says.

Also traveling to Europe were Bailey’s stepbrothers, Kyle and Kevaughn Butler, Craig’s biological sons. They arrived in Austria first, but it wasn’t paradise straight away. Butler, who had already run a football academy at home and gathered his adopted boys there, looked for a way out in football.

But it wasn’t easy. They arrived in winter – a season Jamaicans didn’t really know. They had to fight against stereotypes they were confronted with every day. Cool Runnings, Bob Marley, smoking weed, hahaha. But they weren’t laughing, they had little means, hardly any prospects and wanted to win one through football.

It didn’t take long for Bailey to gain a foothold in USK Anif’s youth ranks, earning him respect. Legends are circulating in Austria that Bailey is said to have scored 75 goals in 16 games for the U15s. That was never proven. The rumor alone was enough for a trial at Rapid Wien – but Bailey failed.

The Stations of Leon Bailey

The journey continued in Belgium, where Butler apparently had good contacts. KRC Genk have always had an eye for good talent and this is how Bailey came to their attention. The club wanted to sign him immediately, but then Craig Butler suddenly disappeared. Disappeared without a trace. Suddenly, Bailey and his sons were “unaccompanied minors” in Belgium and thus effectively in the country illegally.

“It was a sick situation,” said Genk’s technical director Gunter Jacob: “In order to prevent the boys from running around on the street, we made sure that they could go to school and were trained by us.”

When Leon was already fully integrated in Genk, Bailey’s adoptive father reappeared – and tabled loudly courier a confusing story: He was kidnapped and left behind in the desert of Mexico. When investigations started, he disappeared with his sons to Slovakia.

Of course, Bailey was far too good for AS Trencin. So Genk brought back the already incredibly fast attacker after he came of age. The then Genk coach Peter Maes remembers Bleacher Report to Bailey’s signature: “The first words he said to me were: ‘I’ve come to Genk now and I want to study here, but in three years I want to play in a better league than Belgium.’

The rest is quickly told. The move to Bayer Leverkusen, the rising star in Europe, the 40 million move to Aston Villa in the Premier League. If you now know the story of Leon Bailey, other episodes in the life of the 24-year-old have a completely different effect.

There is the story from October 2018 when it was reported that Bailey had refused to play for the Jamaica national team. He demanded that his brother Kyle Butler also receive an invitation for Jamaica or he would not play. “I also have to think about my interests. If I play for Jamaica without proper support, it can damage my career,” Bailey said at the time.

The only problem was that Kyle didn’t have anywhere near the capabilities of his stepbrother, played in the 3rd division of Austria and wasn’t good enough even for a soccer-developing country like Jamaica. Craig Butler was probably behind Bailey’s sudden change of heart, who was initially happy to play for Jamaica: He didn’t just want to see a son on the big stage, but preferably a second one.

When someone like Craig Butler rescues a little boy from that horrific environment, that kind of thing sticks. It shapes. You want to give something back.

It sounds absurd and it is far from any logic that Bailey acted in this way and thus even got angry from his bosses at Bayer Leverkusen. But with some empathy for what they shared, for the gratitude Bailey must have had for his stepfather, the process is less surprising. Craig Butler is still his advisor today, and the relationship is as close as ever.

At least Leon Bailey has arrived. In the middle of football, in the middle of society. In Jamaica he’s a folk hero and of course there’s a close bond with Usain Bolt, with whom we’ve thrown a few parties together. “Usain is a very humble person and I always look up to him and respect him for that. He always gives me useful advice on how to take care of his body,” says Bailey.

Was it because of Bolt that Bailey has returned in such form? “He’s like a newcomer,” said coach Gerrard. For his part, Bailey is looking forward to proving himself again.

He always has his homeland with him. The writing “Cassava Piece Kingston. Where It All Started” is engraved on his boots. So that he never forgets where he came from.