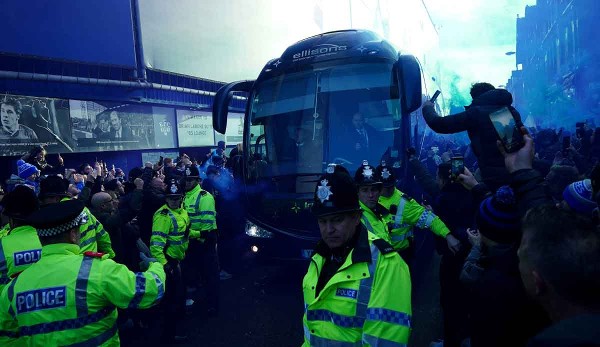 Security threat for the board, bankruptcy in the relegation summit, protests from the fans: Everton FC is sinking into chaos – and there is also mockery from the opponent.

“The Everton board have been instructed not to attend tonight’s Premier League match against Southampton due to a ‘real and credible threat to their security’,” the club said on its own website this morning. This is “an unprecedented decision”. Affected were President Bill Kenwright, CEO Denise Barrett-Baxendale, Chief Financial Officer Grant Ingles and Director Graeme Sharp.

They only saw on television how their team gambled away a 1-0 lead and slipped to the penultimate place in the table. James Ward-Prowse turned the game around with a brace for bottom side Southampton, who are only behind Everton on goal difference. Coach Frank Lampard’s side have been waiting for a win for nine competitive games, seven of which have been lost.

In the summer, Everton invested around 78 million euros in the transfer market in order to attack the European Cup again after a messed up pre-season. Instead, the first descent threatens after 69 years of first class in a row.

Due to the worrying developments, the NSNOW fan campaign was formed. The acronym is a creation of the English word ‘now’ and the initials of the club’s Latin motto ‘Nil Satis Nisi Optimum’ (Nothing but the best is good enough). In the run-up to the relegation summit against Southampton, the organizers had called on Everton’s fans to remain seated in the stadium as a protest, regardless of the result after the final whistle.

At the same time, NSNOW asserted that – contrary to what the club communicated – there was no danger to individuals: “Every fan group involved with us is clear that everything will be peaceful. We don’t know anything about any threats.” The police presence in and around the stadium was nevertheless large, and there were no noteworthy incidents. The fans only shouted slogans against the club management and showed numerous critical banners.

Everton FC: Bill Kenwright is considered the face of the decline

The fans’ anger is not directed directly at majority owner Farhad Moshiri, who tends to stay in the background and last visited Goodison Park in autumn 2021. Since Moshiri’s arrival in 2016, Everton have invested €560m in new players and started building a new stadium. The approximately 860 million euro arena with 53,000 seats on the banks of the River Mersey is scheduled to open in 2024.

NSNOW demands from the Iranian-British billionaire “comprehensive changes in the board and management level of the club” and the engagement of “competent, experienced experts”. President Bill Kenwright, a confidant of Moshiri, is the face of the sporting decline. The 77-year-old film producer has been with Everton since 1989 and has held his current position since 2004. “18 years as President, lie upon lie, there were no ‘good times’, you let our club die,” read one banner. An absolute top club for decades, Everton have been waiting for a title since 1995.

However, in a recent reply to an open letter, Moshiri backed the current club leadership. Moshiri also used this opportunity to express his confidence in coach Frank Lampard, who has been in office for a year.

Everton: support for the team, ridicule from the opponent

Lampard saved the side from relegation last season, but there hasn’t been any development since then. “I know I’m not a magician, I know I’m not the best coach in the world, but I know I’ll work as hard as I can to be as good as I can,” Lampard said after the bankruptcy against Southampton. He did not want to comment on the protests against the club leadership.

Incidentally, Lampard and his players welcomed the fans happily on Saturday: There were cheers as the team bus drove in, and the area around Goodison Park was shrouded in blue fog. After the loss, defender Yerry Mina faced the fans. “I would give my life for this club,” he said in a video circulating on social media.

“We will continue to support the team,” announced NSNOW. “But the position of those responsible for the downfall of our club who stayed away is totally untenable. Our protest will continue to grow until something changes.”

As if all the misery wasn’t enough, Everton also received scorn from the opponent. The night before the game, Everton fans set off firecrackers outside Southampton’s team hotel to disrupt the night’s sleep. Apparently that didn’t work as can be seen from a Tripadvisor review shared by Southampton FC on Twitter: “The rooms were brilliant, the beds very comfortable and the curtains and triple glazing… just wow! You could set off fireworks outside the window and you’d never see it. We’ve never slept so well!”