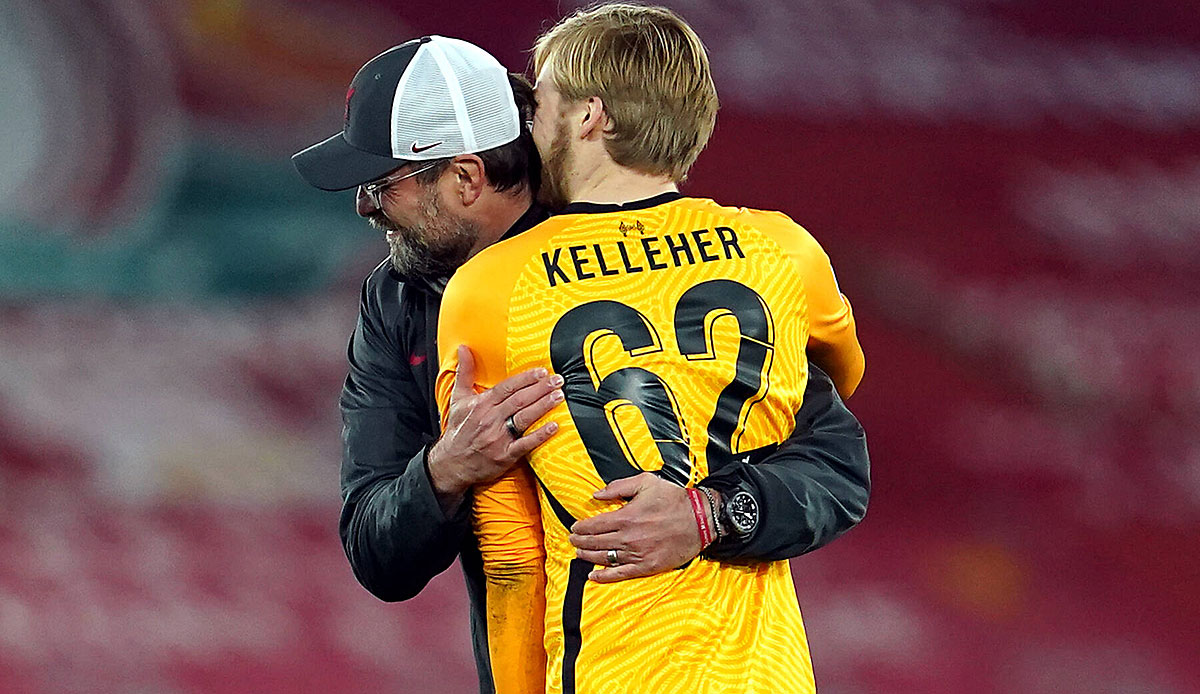 Alisson on the bench, Kelleher in goal: Jürgen Klopp’s line-up for the League Cup final was courageous – but just as consistent.

A faux pas like the one on December 6, 2020 shouldn’t have happened to the Liverpool kit manager since Sunday at the latest. Back then, in the Premier League game against Wolverhampton Wanderers, a fake name was actually emblazoned on the shirt of the Liverpool goalkeeper who was replacing Alisson Becker that day. “cellar” was initially written on the shirt of the young goalkeeper, whose real name is “Caoimhin Kelleher”.

The result was a lot of ridicule via social media, including from England’s striker Gary Lineker – even if Kelleher had worn a jersey with the right lettering in the duel with the Wolves in the second half.

On Sunday, the response to Kelleher was huge again: but this time not because of a small spelling mistake on his shirt. But because of a fantastic performance in the final of the Carabao Cup against Chelsea.

The young keeper, number two behind top dog Alisson in the Klopp team, made a brilliant impression in his first major final against the world club champions. He was one of the keys to Liverpool getting into the shoot-out in the first place, where he went on to become a hero himself with his side’s 11th successful try. And that in his 17th (!) professional game.

Coach Jürgen Klopp was then enthusiastic. Kelleher’s performance at Wembley was “absolutely incredible,” said the German: “For me, Alisson Becker is the best goalkeeper in the world. There are other good keepers out there, but he’s incredible. But if I’m honest, Caoimhin is Kelleher also the best number two in the world for me.”

Klopp’s decision to place the young Irishman against the posts in the final against Chelsea drew a bit of displeasure from Jamie Carragher. The one-time Liverpool defender-turned-TV pundit would have preferred to see Alisson play. After the end of the game, however, Carragher dutifully backtracked.

Kelleher could not have imagined his match-winning role “in the wildest dreams”, he said after the trophy was handed over. However, he did see a small blemish: “I would rather have held one than converted it myself.”

Kelleher extended at Liverpool FC until 2026

The fact that Klopp actually relied on his number two in the final was only logical, how GOALs Liverpool correspondent Neil Jones describes: “Klopp is showing him that he is counting on him. Last summer Kelleher extended his contract (until 2026, editor’s note), got a salary increase and the certainty that he too can play big games when Alisson is fit. Klopp has respected that.”

Kelleher comes from Cork in Ireland. In 2015 he moved from his youth club Ringmahon Rangers to Anfield Road, where he found his way to the professionals through youth and U23. Klopp’s assistant Pep Lijnders knows the keeper well and is not surprised by his development. He said SPOX and GOAL: “I was his coach in the U16s. Right from the start he showed what he is now doing at a really high level.”

The 1.88-meter-tall right-footed player usually does his job extremely calmly, radiates a lot of calm despite little experience and is relatively young and is considered excellent with the ball at his feet.

Kelleher at Liverpool before Adrian and Karius

In the first team, Kelleher Adrian Lopez snatched the post of substitute keeper shortly before the aforementioned jersey faux pas 2020 and kept it even after Loris Karius returned. Finally, the 23-year-old was rewarded with an extension to his working papers ahead of this season.

According to Jones, another adjustment to his contract could follow soon. “Liverpool will do everything to keep him,” said the expert. “After his performances, another raise would not come as a surprise.”

Because it is also clear: Praise like that of Klopp and performances like that of Sunday inevitably lead to the interest of other clubs and Kelleher wondering whether he should not strive for a career as a first-choice goalkeeper at another club. “Liverpool will certainly remind him of Danny Ward and Loris Karius when he thinks about it like that,” says Jones. “They left to play regularly and didn’t make it.”

So it’s likely that Klopp will continue to have a very reliable backup for Alisson going forward. One whose name is now not only in the history books, but also always correctly on their own jersey.