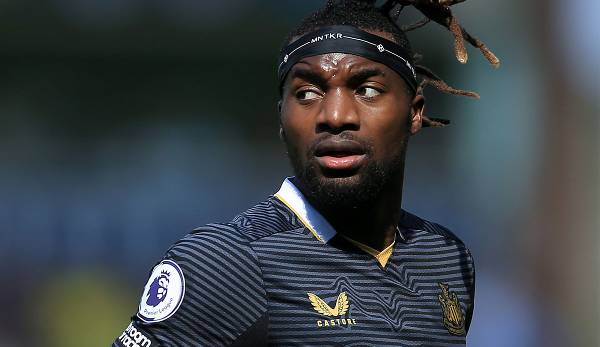 Allan Saint-Maximin is considered a gifted technician – but he never played for Les Bleus. His self-confidence is still high.

Allan Saint-Maximin plays a key role at Newcastle United and is considered one of the technically strongest wingers in the Premier League. So far, the ex-Hanoverian is not enough for the Equipe tricolore alone. In conversation with SPOX and GOAL, the Frenchman made it clear that he has by no means written off the national team – and that he dreams of winning the Ballon d’Or.

“We all know the quality of the French team,” said Saint-Maximin, explaining his absence from coach Didier Deschamps’ squad and comparing his situation to that of a Bundesliga star: “We even see it in a player like Nkunku, who is performing really well – whether in the Champions League or at club level – and who still needed quite a while before he was called up.” Deschamps is therefore not just about individual qualities or statistics, but about a good overall structure.

Saint-Maximin: The goal is the 2022 World Cup with France

These reasons are an incentive for the 25-year-old to continue working hard on himself, he emphasizes: “For example, I am the French player with the most Man-of-the-Match awards in the Premier League (five, d . Red.) A lot of people ask me why I’m not nominated despite my achievements. So there are other reasons and I have to keep working.”

Saint-Maximin was considered an exceptional talent for many years and went through all the junior teams of the French from the U16. According to his own statements, his big goal remains participation in the 2022 World Cup in Qatar: “When the French team won the World Cup, it was something incredible. I also have many friends in the team. It was so happy to see them play for our country really a strong feeling – even for me, who was not called.”

In any case, the Frenchman is firmly convinced of his own abilities: “I think every player dreams of winning the Ballon d’Or. It’s a childhood dream. It’s clear that I’m very far from the Ballon d’Or at the moment . But in terms of quality, I know I’m as good as the players who won it.”

Saint-Maximin attributes the fact that he hasn’t yet arrived in such spheres to his situation in Newcastle: “People who really know football know that I’ve never really had the best conditions with top players around me. When you play with very good players, everything is easier. On the other hand, when you are often alone and constantly struggling to help your team as much as possible, it is more difficult. We see it in Newcastle. We have an exceptional group, but we don’t often have the ball.”

Newcastle is “not Barcelona or Liverpool,” said the 25-year-old, who scored his goals “mainly from individual actions”: “Everyone who has trained with me or played with me has seen my true qualities and doesn’t have to wait until I’m at a top club or playing with great players to know I’ve got the level to play in the Champions League – or maybe win the Ballon d’Or one day.” According to Saint-Maximin, this is similar to Kylian Mbappe, who immediately saw this potential.

The winger has been with the now nouveau riche Premier League club since 2019 and this season he has scored five goals and four assists in 32 league appearances.